Marvel Variants is going to hell

Marvel Variants is going to hell.

For those of you new to this site, Marvel Variants used to be my boss.  That was back before he promoted himself into the stratosphere and put additional layers of management in place between us so that he could spend more time defrauding comic book geeks.

Here's why Mr. Variants is going to suffer the tortures of the damned:   I usually run our morning production meeting, and go around the meeting room asking the Plant Managers and salespeople if they have anything for the larger group.

When I asked Mr. Variants if he had anything new to justify his existence in the company, or on the planet, he pulled out a copy of the Fort Worth Star-Telegram.  The front page had a story of a guy who got a face transplant.

BOSTON -- A Fort Worth man who received the nation's first full face transplant said Monday that the first thing his young daughter told him when she saw him after the operation was "Daddy, you're so handsome."
Dallas Wiens, sporting a goatee and dark sunglasses, joined surgeons Monday at Brigham and Women's Hospital in Boston in his first public appearance since the 15-hour procedure in March.

"It feels natural," said Wiens, 25, who received a new nose, lips, skin, muscle and nerves from an anonymous donor. The operation was paid for by the U.S. military, which hopes to use findings from the procedure to help soldiers with severe facial wounds.
Wiens was blinded and his features all but burned away when he hit a power line while painting a church in November 2008.

No one in the meeting knew where Marvel Variants was going with this story, or why he was reading it out loud in the morning meeting.

Then he held up the picture and said "Out of all the faces that he could have gotten, why did they have to pick Allen Patterson's???"  And he held up this picture. 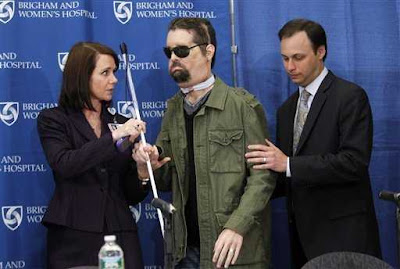 For those who don't know me, I spend much of the winter looking a lot like Dallas Wiens, the burn victim in the picture above, but without that cheerful happy-go-lucky expression that Mr. Wiens has on his face.  See below. 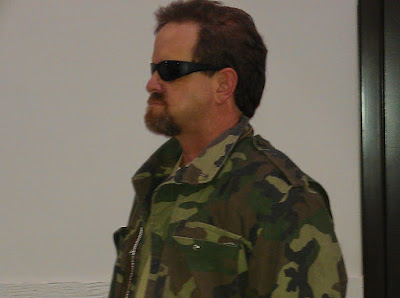 And since I work with a room full of comedians, the responses to "Why did they pick Allen Patterson's face?" were swift and brutal.

"Well, his only insurance was through an HMO...."

"There were 5,000 radiation victims from the Japanese nuclear plant accident who all needed new faces, and they all got to pick first."

"The guy asked his doctor when he would start to see improvement, and the doctor told him 'Oh, that thing will rot off in a few months.  THEN we'll give you a real face.' "

They said things about me that were much, much worse than anything I've ever said about Pelosi, Boehner, Republicans, Harry Reid, or even The Teleprompter Jesus.  I took it like a man.

Wait. I think I saw this. John Travolta and Nicholas Cage. What was it called?

You buy your clothes at the same store too. Uncanny. Separated at birth?

You're thinking of "Face Off", perhaps?

And speaking of "that store", I've noticed that Osama and I have both worn the same style of Wal-Mart Camo jacket.