Note to The Aggie: Aren't you tired of going to school ????

I am trying to get the child known as The Aggie through college.

College is expensive.  Textbooks, thanks to this idiot, are still incredibly expensive.

The Aggie wants to be a veterinarian.  She has loved mammals, reptiles, bugs and amphibians ever since she learned to walk.

During the summers, she works as a lifeguard.  Lifeguard training and certification, if I remember correctly, required that she undergo a grueling series of qualifications, then pass a ten day lifesaving course.  The cost for all of this was $200.00

Until today, I saw lifeguarding as a means to an end, nothing more.  Depending on whose statistics you believe, a good vet can bring home between 75K and 115K per year.

But wait....Here's the Orange County Register:

High pay and benefits for lifeguards in Newport Beach is the latest example of frustrating levels of compensation for public employees. More than half the city’s full-time lifeguards are paid a salary of over $100,000 and all but one of them collect more than $100,000 in total compensation including benefits.


When thinking about career options with high salaries, lifeguarding is probably not one of the first jobs to come to mind. But it apparently should. In one of Orange County’s most desirable beach destinations, Newport Beach, lifeguards are compensated all too well; especially compared with the county annual median household income of $71,735.

According to a city report on lifeguard pay for the calendar year 2010, of the 14 full-time lifeguards, 13 collected more than $120,000 in total compensation; one lifeguard collected $98,160.65. More than half the lifeguards collected more than $150,000 for 2010 with the two highest-paid collecting $211,451 and $203,481 in total compensation respectively.  Even excluding benefits like health care and pension, more than half the lifeguards receive a total salary, including overtime pay, exceeding $100,000. And they also receive an annual allowance of $400 for “Sun Protection.” Many work four days a week, 10 hours a day.

I don't begrudge anyone whatever they earn, as long as they're not taking it from someone else by force.  But these are government employees, and their compensation is taken from others by force.
If you live in Newport Beach,  and put your foot down, and refuse to pay your share of this, and say "I'm not going to pay $200,000.00 per year to have Jack Johnson sit on a tower all day, watching damp supermodels frolic in the sand and the surf," the government will show up with guns at  your house and take your assets or put you in a steel cage.
But all libertarian rants aside, how in the hell can you justify paying $200,000 per year to a freakin' lifeguard?  Is it possible?
Well, yes.  You just compare the compensation to that of other lifeguards in government jobs, and it all makes sense.

In a phone conversation, Brent Jacobsen, president of the Lifeguard Management Association, defended the lifeguard pay in Newport Beach: “We have negotiated very fair and very reasonable salaries in conjunction with comparable positions and other cities up and down the coast.” “Lifeguard salaries here are well within the norm of other city employees.” And therein is the problem: Local public worker pay has become all too generous and out of line with private sector equivalents.


On face, the compensation packages for these guards are staggering. But take into consideration the retirement benefits being paid to currently retired lifeguards and lifeguards who will retire at these pay levels in the future and the problem is further compounded. Lifeguards are able to retire with 90 percent of their salary, after only 30 years of work at as early as the age of 50.

Here's a video put out by a California Watchdog group (yes, that's an oxymoron) called Americans For Prosperity - California. 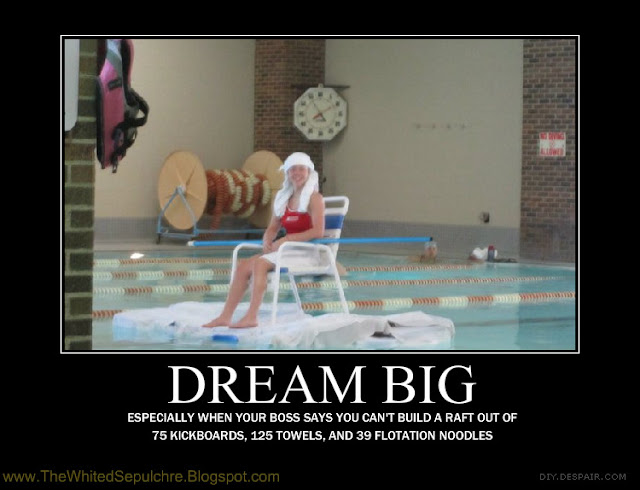 Posted by The Whited Sepulchre at 7:08 AM

Lifeguards are able to retire with 90 percent of their salary, after only 30 years of work at as early as the age of 50.

They are lifeguards, not librarians. Lifeguards! At what age should they be retired? 60? 70?
Think about it.

"I'm not going to pay $200,000.00 per year to have Jack Johnson sit on a tower all day, watching damp supermodels frolic in the sand and the surf,"

Does that accurately represent the job description of a lifeguard? Are you being fair?
Or are you just building a strawman so you can effortlessly knock it down?

Getting your information from just one source on anything is a bad idea. For all you know, you are just badmouthing a profession based upon someone else's analysis who has an axe to grind.
Do some independent research before you get up on your soapbox and start publically wringing your hands.

Americans For Prosperity.
Hmm.
Do they have any connection to the Koch Brothers at all?
Just asking.
(It would be an amazing coincidence if they did.)

The Pacific Ocean isn't so pacific. There are dangerous riptides.

Let's be fair about this. These guys and gals save people's lives - more than 2000 per year. But rescues aren't the full measure of their worth. They also overwatch hundreds of thousands of people.

In July 1983, lifeguards in Los Angeles had more than 3700 rescues in one month.

One Newport Beach lifeguard saved seven teenagers in one day. He was pulled under several times.

Lifeguards save more lives and risk death far more often than your average cop or fireman.

I'll also bet these lifeguards have to pass some stringent tests. Think about it. If the pay is that good and the work that easy, then thousands of people would want the job. Newport Beach would have to cull the heard somehow.

I suggest that they are not overpaid. But rather, Newport Beach should have a more efficient method of making the free-riders who use the surf to pay up. Maybe they should charge admission to the beach, and license surfers and boaters to cover the costs of the lifeguards.

Cedric, in California we have a budget crisis. Our state is $24 billion in the red on a $100 billion budget.

So our budget problems are NOT the result of tax cuts or under-taxation.

We also don't have any Republicans in power or any Koch Brothers to blame our busted budgets on.

Taxpayers in a democracy have a RIGHT to complain about the use (or perceived misuse) of their tax dollars. Politicians don't have the right to spend our money without accountability. And it's corrupt when labor unions and politicians team up against the taxpayers.

Peddle your red herrings in the People's Republic of China.

Does the state of California pay for the lifeguards at Newport Beach? If not, then who does?

Peddle your red herrings in the People's Republic of China.

Oh noes. It's a Kommie Konspiracy.
Maybe I'm a sekrit kommie in the pay of teh little people? The horror, the horror.
:)
The Cold War was over a long time ago. Get out of your homemade fallout bunker. Move on with your life.

If Allen started to cut and paste from a group called "Americans for a Nicer Way" that happened to be sponsered by the People's Republic of China, wouldn't you want to know up front?

If Allen started posting articles from a group called "American Patriots For Greater Decency and Wealth" that were discreetly joined at the hip by Greenpeace, wouldn't you want to know up front?

Not all sources of information are equal. Finding out where information is coming from is a very good idea.
Skepticism, remember?

So where does Americans For Prosperity get it's money from?
Are they controlled by a certain pair of super-rich brothers?

Or is this question verboten?

They also gave 40 grand to the Wisconsin governor who was trying to keep his state's debt from hitting a California-esque high.

They have spent hundreds of thousands of dollars lobbying against the Patriot Act.

And this makes them bad people ????

God almighty, where do you find your talking points, Cedric? If the U.S. ever gets out of debt, stops blowing up Arabs, stops locking up dope smoking black people for fun and profit, and restores its economy, it will be because of the Koch brothers.

One other thing.... no one who owned a private beach would pay a freakin' lifeguard 200,000 per year. It wouldn't happen. Never.

The danger factor isn't there. You can compare them to firemen and policemen (who are also overpaid). Those three jobs don't even make the top 10 of OSHA's dangerous profession lists.