keeps knocking them out of the park, but only on Facebook.  That's why I can't just link to his stuff.

Here he goes with something on immigration:

Line up a dozen Republican politicians seeking public office, ask them what their answer is to the 12 million or more illegal immigrants in America and in remarkable display of political courage, they’ll dodge the question. The answer is usually something along the lines of: “We can’t address that issue until we fix the border. Once the border is fixed/sealed/guarded/mined/booby-trapped we can work on solutions to those already here.” You may even be treated to the phrase, “Path to citizenship.”

We’ve been hearing this for fifty years. Likely, we’ll hear it for another fifty. Like so many issues, if we didn’t have an illegal immigrant problem, politicians would have to invent one. (This piece is not meant to unfairly single out Republicans. It’s just that the Democrats would gladly apologize to Gaia and hand the country back to the Seminoles and the Apaches, so there’s just no point in dragging their ideas into the mix.)

Fortunately for most of us, our ancestors came to America long before numbskulls ruled the roost. Can you imagine what it would have been like 100 or 150 years ago if the solutions to immigration being talked about now were official policy then? For much of America’s first century the borders were wide open. No one had identification or passports or had to undergo retina scans and full body cavity searches to get into the country. They either walked across the border or down a gangplank. Voila. New Americans.

But what if, when the great waves of migration began from Europe in the 19th century, the existing American population, descendant mainly from English and German stock, had the same mentality we have today? Would calls have gone out to seal the ports to protect American sovereignty? Would politicians demand that a navy be built to intercept passenger ships on the high seas and turn them back to their country of origin? Would candidates for office run on platforms of rounding up the new arrivals and shipping them back to Europe? “Just look at them, these wretches who inhabit the filthy tenements of Manhattan, with their strange languages and even stranger customs. They won’t even assimilate, choosing instead to stay with their own kind creating their own communities like Chinatown, Greek Town, Little Italy. Look at them: there are Poles and Slavs and Gypsies and Italians and Jews. Jews! They’re not even Christians, for the love of Pete. And have you seen what the filthy Irish have done to Boston? Completely overrun it they have, with their pale little redheaded children and their Catholic priests and nuns. But we can’t deal with the ones that are here until we find a way to seal off the Atlantic coast.”

Ah, to transport 21st century politicians back to 1880. And leave them there.

Of course, we do not have to guess what our forebears did in regards to new immigrants to America. It’s part of America’s history. To put it succinctly, they welcomed them. They embraced them. They made them citizens. By 1892 the waves of immigrants grew so intense the federal government opened Ellis Island in New York to process the new arrivals. Over the next 62 years, some 12 million new Americans passed through its doors and went on to build the greatest and most prosperous nation in the history of the world.

So what’s the problem today?

Answer that question by asking another one: Since the great migration today is by land from the south rather than by sea from the east, where is the Ellis Island of the southern border? Are these people welcome or not?

Wrap your mind around that for a while and you’ll see that we do not have a serious immigration policy in this country. We have a political football which both sides like to kick back and forth because it allows them to play their political bases like human yoyos. The problem will never get resolved until we cultivate politicians with some spine.

There’s a certain word that begins with “A” which no politician would dare propose concerning the millions of undocumented immigrants already here, even though it is precisely the same prescription used by our forebears who, when faced with a similar issue, used their heads and did what was right, not what was politically expedient.

They welcomed the new arrivals and created the means for them to become citizens.

(Go here to get a copy of Adrian's book "Common Ground America", and check out the political program he's trying to establish.  He's also got some good ideas about spreading the Texas holiday "Juneteenth" to the rest of the nation.) 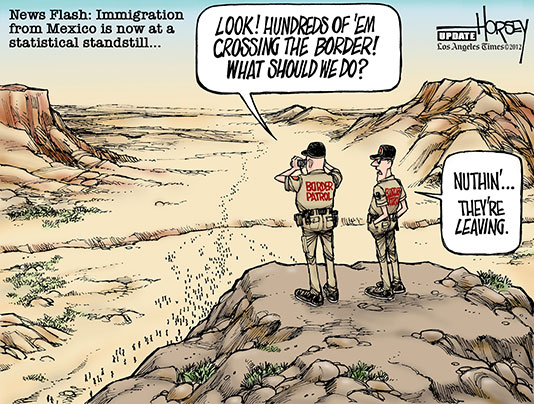 Posted by The Whited Sepulchre at 8:15 AM

I'll agree that immigration has become politicized, and that reform is needed. But to suggest that our forebears welcomed and embraced immigrants is to indulge in revisionist history. Does "No Irish need apply" sound familiar?

In 1868 the Chicago Post wrote, "The Irish fill our prisons, our poor houses...Scratch a convict or a pauper, and the chances are that you tickle the skin of an Irish Catholic. Putting them on a boat and sending them home would end crime in this country."

Immigrants were stereotyped according to ethnicity. Italians were reputed to be violent, irrational, passionate, sloppy, dirty, criminal, and – as Catholics – beholden in some sinister way to the Pope in Rome.

The Chinese Exclusion Act in 1882 blocked new immigrants from China for almost 100 years. It was a significant step in Americans embracing the idea of limiting “undesirable” immigration (of whatever kind) through legislation.

Speaking of the Chinese, in 1886 rioters in Seattle, Tacoma and Port Townsend tried to force Chinese workers onto boats to "send them back where they came from."

This country has a long history of treating new immigrants shabbily. By all means lets have a discussion about immigration. But let's make it an informed discussion, not one built on fairy tales of the past.

I think you're both saying the same thing, but from opposite viewpoints. Some of the anti-Catholic, anti-Irish, etc viewpoints were around then, but they DIDN'T decide to seal off the Atlantic !

BTW, when China started to allow workers to move around more freely, you should've heard the residents of the "Free Enterprise Zones". Same song, different verse, about their fellow Chinese from out in the boondocks. It was almost funny.

No doubt Mr. Murray and I agree more than we disagree. I just couldn't let his statement that earlier immigrants were 'welcomed and embraced' pass unchallenged. And I would argue that the public sentiment back then to seal off the Atlantic was roughly equivalent to the current sentiment to seal off the southern border.

But that's just quibbling about semantics. The basic issue remains: what to do about our immigration policy.

FWIW, I lived in Japan for three years. Those folks are some of the biggest racists/isolationists I've ever been around. I think it has something to do with living on an island with virtually NO immigration for centuries.