Heterosexual Marriage Is A Sin

This is starting to piss me off.  Here's the ABC News website:


A proposed amendment to North Carolina’s constitution which would make marriage between a man and woman the only legal union recognized by the state has passed a statewide vote, the Associated Press reports.


The referendum- North Carolina Amendment One- goes a step beyond outlawing same-sex marriage, which was already illegal in the state. The law decrees that “marriage between one man and one woman is the only domestic legal union that shall be valid or recognized in this State”- meaning that civil unions and potentially other types of domestic partnerships will no longer be legally recognized. 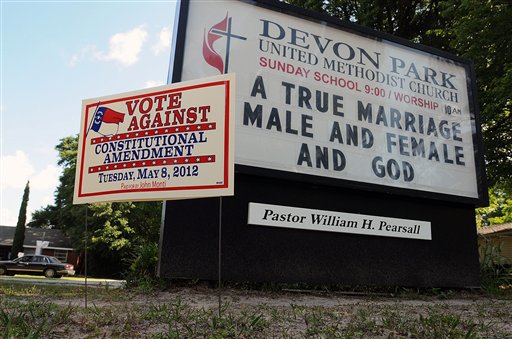 ﻿Tony Perkins, President of the Family Research Council- a conservative Christian organization- released a statement applauding the vote.
“We applaud North Carolina voters for joining voters in 31 other states upholding the historic and natural definition of marriage as the union of one man and one woman” the statement said. “At every opportunity, the American people have demonstrated a deep appreciation for the unique benefits that marriage between a man and a woman brings to families and society. They recognize that marriage is the only kind of union that results in natural procreation and keeps a mother and father together to raise the children produced by their union.”

Yeah, I think it's best that a child have two parents.  If a child has more than one sister and one brother, it might be best to have four parents just to help keep everybody fed and clothed.
If a child is going to Texas A&M, it might be best for the kid to have six parents:  A mother, a father, a banker, a lottery winner, Bill Gates, and an illegal immigrant getting paid under the table, just to help pay for all the A&M fees and services.
But back to the point raised by Tony Perkins of the Family Research Council, which needs refuting.....  The Bible says that heterosexual marriage is not the ideal condition for Christians.  I repeat:  "He on She" marriage is not the ideal condition for Christians.
This billboard is a lie. 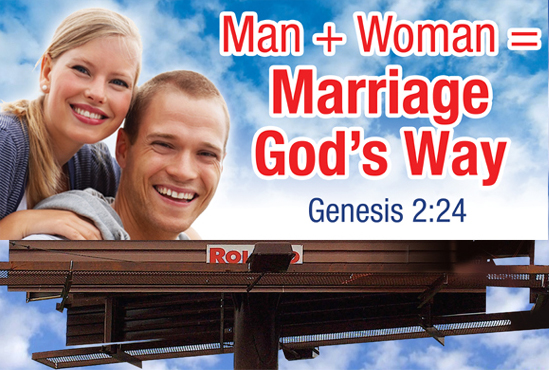 If you take the Apostle Paul seriously, and if you believe he was divinely inspired and not just blogging, heterosexual activity within the confines of heterosexual marriage falls short of perfection.  Therefore heterosexual sex is a "sin", just like gay sex, lesbian sex, rape, pedophilia, bestiality, and forcing children to watch the John Edwards sex video are all supposedly sins.  Sin is anything that falls short of the ideal, anything less than perfection.
Paul said so.  Here's the man himself:

I wish that all were as I myself am. But each has his own special gift from God, one of one kind and one of another.
To the unmarried and the widows I say that it is well for them to remain single as I do. (1 Corinthians 7:7-8)

The man has spoken.  Remaning single is the ideal.  Anything else falls short of perfection.  And elsewhere in the Bible, sin is "falling short of the glory of God".  To top it off, here's James 4:17.....

17 If anyone, then, knows the good they ought to do and doesn’t do it, it is sin for them.

What you should do, according to Paul, is to remain single.  If you know what you should do (remain single) and fail, then you have sinned.
(Note to my friend Mike Coyne, who is seriously considering falling into sin this fall....Don't do it !!!)
Yet fundamentalist preachers do weddings all the time.  Strange.
There are a few other problems in the biblical view of marriage (only one of these is defended at great length at the Family Research Council website).
See, there are multiple types of marriage authorized in the "Bible".  One of the interesting ones is detailed in Deuteronomy 22:28.

28 If a man happens to meet a virgin who is not pledged to be married and rapes her and they are discovered, 29 he shall pay her father fifty shekels of silver. He must marry the young woman, for he has violated her. He can never divorce her as long as he lives.

There are others.  The book of Judges, Chapter 19, has a long story about the responsibilities of concubines.  You can have a wife and a Ho, and if the Ho is a disappointment you can chop her into smaller pieces and send the dismembered whore parts all over Israel.  Look it up.
Here's a helpful chart for every man who doesn't have the spiritual strength to remain celibate and single, and who wishes to sin by marrying a woman. 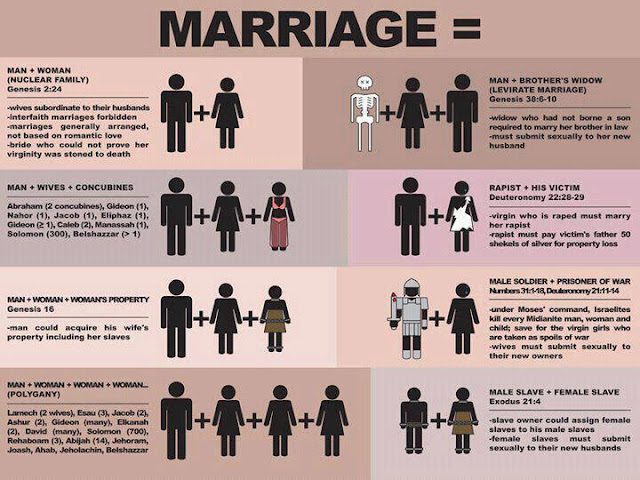 Paul was the last "divinely inspired" person to write on this issue.  He said don't get married.  To anybody.

I still don't understand why the Family Research Council is so opposed to gay marriage and not all the other kinds.
Posted by The Whited Sepulchre at 7:50 AM

It is asinine and dishonest arguments like this one that make so many Christians suspicious of libertarians, when in fact they should be politically libertarian. The Bible does not teach that all heterosexual sex is a sin; that is a blatant lie, as anyone who actually reads the Bible will know. You have deliberately cherry-picked verses out of context, making it seem as though St. Paul was advocating something very different from what he actually wrote.

Instead of striving to be a snarky smart ass, you would have done much better to point out to Christians that they have made a serious mistake in allowing the State to define what constitutes a "marriage," as Norman Horn does in his post on LibertarianChristians.com.

Meanwhile, poster child for the Tea Party wing of the Libertarian Party, Rand Paul, has voiced his opposition to same sex marriage, saying the issue should be left to the states to decide.

Why does he think letting the states discriminate makes this any less awful?

And in some states they actually vote on it.

Gar, you can't imagine how much I totally agree. Imagine the chart I posted being debated in the Texas Senate. Makes my teeth hurt thinking about it.

Knowing you as I do, I'm sure you wear it as a badge of honor. You ought to get it printed on a t-shirt.

Yes, you misinterpreted Paul. He isn't saying anyone who does marry is wrong.

In verse 7:1 Paul references what someone wrote to him "Now for the matters you wrote about: “It is good for a man not to have sexual relations with a woman.”

His answer is basically is IF people are going to get freaky, they should ONLY get freaky with their spouses.

This is clear from Verse 5 where he says don't deprive each other except for a limited time and in Verse 6 I say this as a concession, not as a command.

He fully recognizes that people are not able to devote themselves 100% to God. That leads to verse 7 where he expresses a WISH I wish that all of you were as I am. But each of you has your own gift from God; one has this gift, another has that. AND recognizes that his own celibacy is a gift from God.

And my personal view on the subject is that marriage is a subject for religion and the government needs to get out of that business.

I am so disappointed in your new profile pic. I had grown very fond of the last one.

The tricky issue is whether a constitution can be unconstitutional. The California amendment is before the Supreme Court now. I don't expect them to make the right decision.

States discriminated against blacks, and the 13th and 14th amendments took care of that.

Government can't get out of the marriage business as long as "marriage" continues to create a body of contracts that must be enforced by the state.

My personal view is that government should stick to the contract enforcement business and stay out of people's personal choices. While that slippery slope may lead to polygamy, I'm not sure that should be banned either.

In my opinion, the medieval traditions of marriage are woefully obsolete. I think marriage contracts should have expiration dates with options for renewal, and all of them should have prenups. Then maybe people will consider the consequences of their actions more carefully.

Bob,
There's perfection, and there's the stuff that falls short of the glory of God. Paul told us what we should do, right. Anything less than that is a sin.

I don't think you've made your case yet. Plus, you haven't tied in the rape victim marriages and the POW marriages.

I don't agree that I've not made my case.

You took a single scripture out of context and used it to support a contention that is out of line with the rest of the bible.

You've provided not a single direct reference to God or Jesus that supports your view.

Paul is not saying that celibacy is required and anything less is a sin. In John 2, Jesus attended a Wedding, surely He wouldn't have attended unless He approved of Marriage.
Jesus also performed his first recorded miracle (Water into Wine) a wedding -- isn't that a sign of approval?

What he is saying that sexual immorality -- and we all have a bit of that in us - is a sin.
Just like lying, stealing, covetousness, wrath.

We all have fallen short of perfection, if we hadn't there would have been no need for Jesus to die on the cross.

Jesus came to fulfill the old covenant; that is why the old laws that you mentioned are no longer applicable. In order to abide by only those laws, you have to believe ONLY in the Old Testament.

Hot Sam - You now have an opportunity to vote on which Dr Ralph profile picture you prefer: Classic Dr Ralph or New Dr Ralph.