Adrian Murray on losing our souls

I've recently had three frustrating conversations lately with three different friends about our overseas military adventures.  One friend is a Republican, one is a Democrat, and the other, as best I can tell, is indifferent.

When the subject comes up, I try to point out that if the Chinese had military checkpoints between our homes and our jobs, we'd resent them.  Just a little bit.  Then I question how much we should continue to pay to defend South Korea, Japan, and Germany.  A few times I've offered to take donations for defending Germany's borders.  Nobody contributes.  Regular readers of this blog already are sick of me beating these dead horses with the same old sticks.

There's also the old standby...."We've got 6% of the world's population, but we're responsible for 45% of the world's military spending."  My friends don't think this is odd or unnecessary, despite Italy, Brazil, Mexico, Japan and Germany having relatively small military forces and they seem to do just fine.  In fact, since they don't have to supply funding to an obscenely expensive army and Hillary Clinton's air miles, some of their manufacturers are doing great.

These discussions with these three unrelated friends came down to one final point....But this is my job !! My job at Lockheed/Bell Helicopter/Carswell Air Force Base/Owen Oil Tools depends on a huge military.  Think of what it would do the economy if we were to reduce our military.  One of them even said "Whited, you realize this stuff you're doing in politics isn't a game, right?  There are hundreds of thousands of jobs at stake."

Does it really come down to that?  Are we going to keep blowing up children just to ensure that unemployment doesn't go above 9% ??? 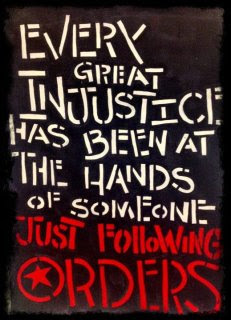 My friend Adrian Murray is one of the bad guys that the Lamestream Media often warns us about.  Adrian has been associated with the Tea Party and Glenn Beck's 9-12 group.  He's also an evil capitalist of the worst sort, providing wiring harnesses for cars and trucks, and creating jobs for immigrants, all in exchange for a profit.  Adrian has apparently been thinking a lot about this topic.  Here's something he threw down on Facebook a few days ago:


But no one told us we would lose our soul.

For a brief moment after 9/11, Americans of all shapes and sizes, colors and ages and creeds, came together as one. For that brief moment, forever now lost in the narrow corridors of memory, we were kind to one another. The America that we always sensed, always believed in, was there for that brief shining moment. It is gone now. Gone forever, perhaps.

What happened to us that we find ourselves where we are today, tearing ourselves apart in fits of anger and fear and boiling rage? We are a nation being pulled asunder, a nation on the precipice of losing not just our country, but our entire identity as well. We had better understand what is happening to us if we are ever to find ourselves again.

We all have differing memories, different experiences and not all of us came to the same place by the same route at the same time. For me, the unease began in June 2002, when President Bush delivered a speech to the graduating class at West Point:

“Yet the war on terror will not be won on the defensive. We must take the battle to the enemy, disrupt his plans, and confront the worst threats before they emerge. In the world we have entered, the only path to safety is the path of action. And this nation will act……And our security will require all Americans to be forward-looking and resolute, to be ready for preemptive action when necessary to defend our liberty and to defend our lives.”

We had just completed (or so we thought) a successful military campaign in Afghanistan where we had routed the Taliban and established a seventh century version of a Democratic government in a country permanently locked in the middle ages. We still bore the wounds of 9/11 and while we vowed never to forget, we were beginning to heal.

I remember the unease I felt when I heard those words above. Preemptive action? Were we about to attack somebody? Someday someone may astutely observe that that was the moment America began her slow slide into chaos.

Wars are alternately galvanizing and divisive events. One, of course, wants the home team to do well, to fight with honor and to come home safely. To do that, other people must die, many of them innocents. Many, sadly, are children. But they’re not our children so our grief is not long lasting. We move on to other things - celebrity weddings and all of that.

It became popular during the Iraq war to show one’s support for the troops with yellow ribbon stickers on trunk lids and rear windows. It was, we felt, fitting to show our support for the soldiers while not tacitly endorsing what was being done in our name and on our behalf.

No one at the time believed we would be supporting those troops in Iraq for nearly a decade. The Pentagon went in thinking they’d be out in six months. As 2003 turned into 2004 and 2005 turned into 2006 and the brutality and horror of what was happening in Iraq was too shocking for most Americans to behold. Major news networks, in order to protect American sensibilities, shielded us from the true nature of the carnage, showing just enough to provide a hint that there indeed was carnage, but never going so far as to actually show the beatings, the tortures, the slaughter of children and women, the destruction of homes and property, the random, senseless killing. We knew it was there, we all did, yet many turned away or changed the channel. America is a shining light in the world and we can do no wrong.

The slaughters then in Iraq and Afghanistan and now in Pakistan and Yemen, are remote to us. They come to u in thirty second bites on the evening news or as crawls at the bottom of the screen. We talk about bombings and air strikes and killing as casually as we discuss the weather, as if what is being done in our name is of no consequence to us, as if other life has no meaning. We weep for the baby in a well but close our eyes to the babies in hell.

I watched a video the other day, one that in one moment I wish I hadn’t watched and then in another I am glad I did. It was raw footage, purportedly from Libya , but I have no way of knowing, of bombs dropping near villages, bombs with huge fire and mushroom clouds hundreds of feet in the air, footage of screaming, terrified children in the streets, running in search of shelter or loving arms, footage of living children with their jaws blown off, shrapnel wounds the size of grapefruit in the back or limbs, dead children by the roadside, blown apart and I thought to myself, my dear God, what have we become?

My God, what if they were our children?

I don’t mean to be harsh towards those I do not know and they are many, I am sure, who came to this revelation long ago. But, America, out of our horror and our sadness and our anger from the events of 9/11, we have become a cold and a brutal people, content to inflict misery on others in order to prevent it from being inflicted upon us. We are like the citizens in the Capitol of Panem , cheering on children killing each other in order to be spared some personal discomfort. That may be fine for now and it may buy us some time and some leisure, but one day we are going to have to answer for all this, in this world or in the next.

Have we lost our soul?

Today it was reported by the Washington Post that President Obama has authorized the CIA and the military to expand the drone bombing campaign in Yemen. There was a time I would have read that and not given it a second thought. So what? I would have thought. Doesn’t impact me. Kill the bastards.

But then I thought of who we were and what we have become. The article in the Post contains this statement: “The expanded authority will allow the CIA and JSOC to fire on targets based solely on their intelligence ‘signatures’ — patterns of behavior that are detected through signals intercepts, human sources and aerial surveillance, and that indicate the presence of an important operative or a plot against U.S. interests. Until now, the administration had allowed strikes only against known terrorist leaders who appear on secret CIA and JSOC target lists and whose location can be confirmed.”

So now, just because we can, we kill people without discrimination or identification based on patterns of behavior. Just who authorized this in Yemeni government, or is the only sovereignty we respect our own?

The image of young military personnel lined up at computer screens deep in a mountain side in Colorado, joystick in hand, dropping bombs on people they don’t even know and can’t really even see thousands of miles away on the other side of the world based on “patterns of behavior” is not my image of America. It is not what I conjure up when I think of the home of the brave. It is most definitely not what John Winthrop envisioned when he told his fellow settlers in the Massachusetts Bay Colony, “For we must consider that we shall be as a city upon a hill. The eyes of all people are upon us.”

For our own sake and for the sake of our children and for the sake of children halfway around the world living in ramshackle villages sewers flowing in the streets, we must regain our sense of who we are or at least of who we were before we became who we are. We need to rediscover ourselves - and quickly. The time is running out. The choices before us are stark. We can either continue closing our eyes to the horrors around us, continue sinning the sins of the weak and the fearful, or we can shed the shackles of fear and restore America to her ideals.

There’s only one man left running for President who understands that. It took me much longer to come to that conclusion that it should have. If you’re on the edge, get off it. It’s an exhilarating discovery to realize Ron Paul has been there all along. Take the plunge. 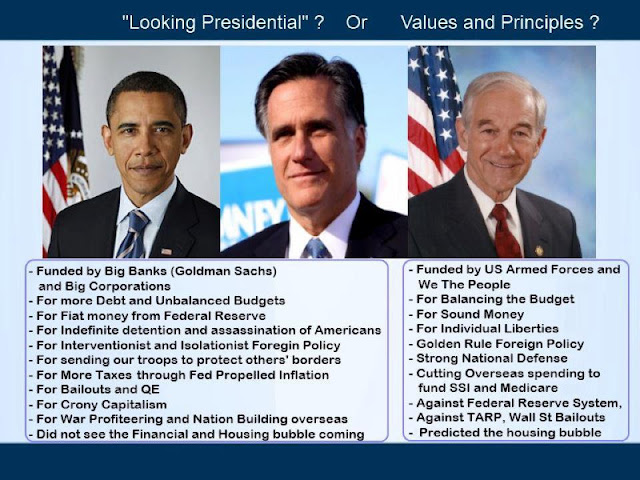 Great essay, there, Mr. Murray.
And just in case Ron Paul drops out of the race or doesn't get anywhere at the Republican convention, there's going to be a Libertarian candidate on the ballot who believes in the exact...same...things.

Go Gary Johnson !  Or Lee Wrights !  Or anybody but one of the Obamneys !!!
Posted by The Whited Sepulchre at 8:18 AM

Had I been as eloquent as you, I would have made people cry, instead you made me cry.

Thoughtful, and passionate. I hope every American reads this.