Gary Johnson is the Libertarian Party's nominee for President of the United States !!

Once more, for the sake of Google searchers.    Who is the Libertarian candidate for President of the United States in 2012?

Delegates to the LP convention in Las Vegas made the final decision on May 5th.

Here are some of Johnson's accomplishments, courtesy of his campaign website:


Vetoed 750 bills during his time in office; more than all other governors combined


Cut over 1,200 government jobs without firing anyone


Created more than 20,000 new jobs  (This one is an embarrassment.  Johnson used to claim that he created zero jobs as governor.  Government isn't in charge of creating jobs, dammit.  Anyone in government claiming that he created jobs was either playing favorites, picking winners and losers, or creating make-work government programs.)


Restored State General Fund reserves to more than $222 million from a low of $28.1 million 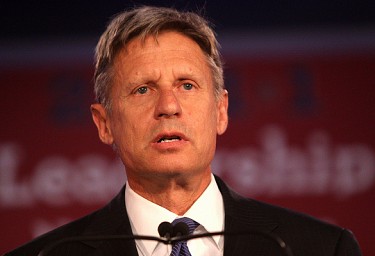 Hit the Gary Johnson label below to read more, and to read our interview with Gary when he was in town for the LP Presidential Debate.
Posted by The Whited Sepulchre at 3:00 PM

gary johnson is a terrible libertarian. ron paul is more libertarian than him and he's a freaking republican. this is the equivalent of romney winning the GOP nom. i was rooting for Bill Still

@Anonymous, Well at least you have facts to back up your outlandish claims. Vetoes and balanced budgets? Euw gross, NO THANK YOU! Throw Johnson back.

The Tarrant Couny Libertarian Party flew Bill Still to Fort Worth for our LP Presidential Candidates debate.
He participated and did a good job of presenting his views. And his views are on Fractional Reserve Banking. Nothing else. Watch the video when time permits.

Then, during his closing statement, Still basically shut down his campaign. Said he wasn't going to pursue it, since Johnson was obviously going to be the LP Nominee. HE DID THIS AFTER WE PAID TO FLY HIS FRACTIONAL RESERVE ASS TO FORT WORTH.

Like I said, watch the video. It was a sorry, no-class performance on Still's part. Did he learn something during the debate that made him decide to shut down his campaign? I don't think so.

Agree... Still tried to back out at the last minute. We had already advertised his presence (because he had accepted) - so the tickets were outlandishly priced. Really didn't like my Still presence. He was a one topic candidate.

Johnson may not be a 100% purist, but he's certainly no Barr and close enough for government work.