Why Scott Walker's win is a good thing

Walker is a Republican, meaning he's in a party that is pro-drug war, pro-oil war, anti-civil liberties, kinda pro-theocracy, and pro-national debt.  In other words, he's as bad as a Democrat.

But here are the reasons that come to mind why Walker's recall election victory is a good thing:

1) When a government official and a union boss sit down to "negotiate" a new deal, no one at the table is representing the taxpayer.  It's two wolves and a sheep deciding what's for dinner.  I have friends who are just a few years older than I am who have already retired from government jobs with massive pensions.  They'll probably be paid for not working for more years than they were ever paid for working.  This isn't sustainable.  (And yet NPR's "Sustainability Desk" has never commented on the problem.  Strange.)

2) Requiring people to contribute to a third party in order to hold a job is wrong.  Unions bosses have grown fat and happy off these mandatory fees.  A significant number of union employees would like to get out of the system.  1/3rd of union households voted for Walker, BTW.  Give workers a choice in joining the union vs. not joining, and look what happens.  Here's Alanna Goodman, writing in Commentary magazine:

The state’s second-largest union, American Federation of State, County and Municipal Employees, had membership fall to 28,745 in February from 62,818 in March 2011, the Journal said Thursday. The organization’s Afscme Council 24, composed of state workers, fell more than two thirds to 7,100 from 22,300 last year.

A key reason that membership dropped was because the labor law, championed by Republican Gov. Scott Walker, forbids automatic collection of union dues. Instead, workers must voluntarily say that they want to continue to continuing paying dues to remain members of the union.
Union workers have also dropped out because of high pension and healthcare costs, and others believe that the unions are no longer influential.

The last sentence is wrong.  The unions were highly influential in diverting slush to the Democrats.  And now that Sugar Teat is gone.

3) Union fees are spent on politicians.  Politicians are then obliged to spend even more money on make-work projects to keep the unions busy.  The circle never ends.  The debt increases. 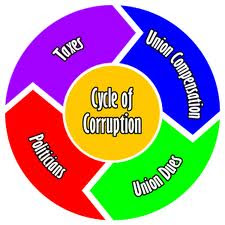 4) The conflict was usually described by the Lamestream Media as a matter of union "rights".  Sorry folks.  There's no such thing as a "right" that infringes on the money, time, or property of someone else.  They should've used the phrase "union privileges".

5) The only way a union can be successful is to keep out the poor s.o.b.'s who are willing to do the job for less.  Mandates that state projects use union labor guarantee that all government projects will cost more than they should.  And please don't give me any crap about union expertise.  Compare any union LTL freight carrier with their non-union counterparts.  No difference.  The woods are full of people who can out-teach a lot of the teachers' union footsoldiers.

Every time I've had to deal with the unions at Chicago or Vegas tradeshows, it's been a case study in corruption.  Without fail.  They don't even have union employees working the damn things.  They hire temps to drive the forklifts and unload the crates much of the time.  But the vendor still has to pay them the union rate.  If you challenge the extra fees they tack onto the bill, you get ominous warnings about how much difficult it'll be for you next time.  Screw the Teamsters.  All of them.

6) Barack Obama supported the unions and the recall effort.  Yeah, Obama was widely criticized for not showing up or making more speeches in favor of the recall.

But I repeat:  Barack Obama supported the unions in this recall effort.  When Obama supports something, it's almost always bad for the country.  Seriously.

A compass that is 99% wrong 99% of the time is still useful for navigational purposes.  If I could take Obama to a Vegas sports book and double-down opposite his wagers, I'd be a rich, rich man.

Hope you all have a great day.  I'm going to go to our non-union shop where we employ people without having to give a dime to James Hoffa, Jr.
Posted by The Whited Sepulchre at 6:55 AM