Why Texas Is Great

I'm writing this from the Libertarian Party Of Texas State Convention.

Here's one of the many reasons why Texas is great.....

While NYC mayor Bloomberg is wanting to ban large sodas,

While Mrs. Obama is wanting to regulate school lunches,

While England is considering a ban of sharp knives,

TEXAS IS BUILDING A ROAD WITH AN 85 MPH SPEED LIMIT !!!

The Texas Department of Transportation said today a toll road being built from San Antonio to north of Austin could be the first road in the country to have a posted 85 mile per hour speed limit.

"It was designed under extremely high design parameters," said Darren McDaniel, the Speed Management Director for the department, which builds and manages all Texas highways.

The highway, called State Highway 130, is being built to take traffic loads off of the heavily overcrowded Interstate 35 between San Antonio and north of Austin, a stretch which is one of the most congested in the country. Most of the highway is built, and posted at 80 miles per hour, and the remainder is set to be opened before the end of this year.

This is why Texas rocks.  We've got places to go, people to see, things to do.  Please stay out of our passing lanes !! 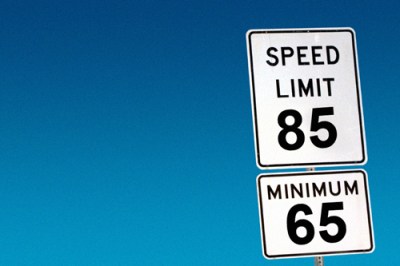 Only 15 more MPH until we reach our goal.
Posted by The Whited Sepulchre at 8:32 AM

Why does that road "need" a speed limit at all? Statist idiots.

I'm guessing they're not raising the speed limit on the roads near it where if you don't want to pay the toll for a road your taxes have already* paid for you still have to drive 45 mph.

I had the same thought as Kent "no speed limit" McManigal.

Anon, FWIW the speed limit on some stretches of interstate highways in TX is 80. On many others it's 75.

Actually, this raises an issue I have a hard time dealing with when it comes to Libertarians - where to draw the line between personal liberty and protecting us from each other. I'm sure everyone reading this believes that we are capable enough drivers that we don't need a speed limit. But those other idiots out there ... please save me from them.

Lawsuits, insurance settlements, fines or jail time - if there's a fatal accident all that is after the fact. Speed limits and police presence may not prevent all accidents, but they do reduce the number of them.

CenTexTim- I guess what makes me different from others is that I never say "But those other idiots out there ... please save me from them."

Part of being a "capable enough driver" is not needing to be saved from the bad drivers. (Not saying I am that great, but...) It is MY job to watch out for the other guys. It is MY job to try to avoid getting hit. I may not succeed every time, but cops don't make accidents impossible, either. I'll take liberty over "protection" every time.

If you can't protect yourself from others, no one else can do it for you.

Kent - thanks for the response. I agree with the gist of your remarks, but I'm still left with the original question: where is the line between personal liberty and government? To continue with the traffic laws example, it seems reasonable for the government to institute a set of laws to regulate behavior on public roads (drive on the right, stop at red lights, etc.). It also seems reasonable to grant the government limited powers to enforce those laws.

I'm not being argumentative. I'm just trying to understand the Libertarian position on such matters.

There should be no such thing as "public roads" to begin with. They are built on property that was either stolen or bought with stolen (or counterfeited) money, and are maintained with stolen money. And, the government accepts no reasonable liability for your safety and the safety of your property while you are on that road. The liability is one-sided. If you hit a pothole, the damage is not repaired (except in extraordinary circumstances).

I would rather have the option of using private roads where I can refuse to do business with a provider who doesn't maintain his roads or accept liability if he fails. Or if he has too many draconian rules, and decides he can waylay travelers on a whim to extort extra money from them I would not use his roads. Any monopoly is a bad idea, and no monopoly can survive without government protection- especially government monopolies.

Have you seen what happened to some European cities when they removed all traffic signals? Fewer accidents and faster commutes (watch part 1, also).

Things like driving on the right could be required by the road owner. Most likely, a requirement would not be necessary. Most people don't want to be in a collision, and those who do wouldn't obey the rule anyway.

So, no, in my opinion it is not reasonable to grant government any powers to do something they shouldn't be doing in the first place- controlling the roads.

Liberty is the freedom to to anything that doesn't violate any other person's equal and identical liberty; anything you have a right to do. No one, and no group, has the legitimate authority to violate that.

So, where is the line between personal liberty and government? It erases government entirely.

CenTexTim - I'm with you.

This was published in Pravda.ru June 13 at 7am and is now on 80 websites in America and in 18 countries.