The Rich Are Different Than You And Me. They Read.

Dave Ramsey recently featured a neat list of factoids generated by Thomas C. Corley, author of "Rich Habits".  Here's Corley's list of things that differentiate the wealthy from the rest of us.  I've known a lot of rich folks, and this list rings true.

Contrary to the belief system of the statists and the redistributionists, it appears that most rich people are rich because they planned to be rich.  Or, to phrase it properly, they had a goal and worked toward it.  The money came later. 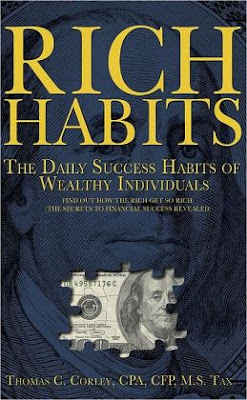 
2. 80% of wealthy are focused on accomplishing some single goal. Only 12% of the poor do this.

4. 63% of wealthy listen to audio books during commute to work vs. 5% for poor people.

6. 63% of wealthy parents make their children read 2 or more non-fiction books a month vs. 3% for poor.

7. 70% of wealthy parents make their children volunteer 10 hours or more a month vs. 3% for poor.

16. 74% of wealthy teach good daily success habits to their children vs. 1% for poor.

19. 86% of wealthy believe in life-long educational self-improvement vs. 5% for poor.

On a related note, here's The Whited Sepulchre list for avoiding poverty.  I've seen variations of studies about this all over the 'net, and the documentation should be easy to find.  Poverty doesn't hit people at random.  If you live in the USA, and do the following, it is unlikely that you will end up in poverty.

2. Get a job, any job, as soon as legally possible.  Mow yards.  Sack groceries.  Whatever.  Get something, anything, to fill up that "Previous Experience" section of your future job applications.

3. Don't get pregnant until you are married, and don't get married until you're 21.

5. Vote for Libertarians.
Posted by The Whited Sepulchre at 7:55 PM

Email ThisBlogThis!Share to TwitterShare to FacebookShare to Pinterest
Labels: a fool and his money are soon parted, habits, rich people, suggestions, Too Many Books, top 10 lists

You left out -
go to the right school with the right people.
Join all the appropriate societies.
And above all:-
Don't get found out.

Kinda, sorta.
That's the primary reason the Ivy Leagues are so important. It's not what they teach you, it's who you meet.
And, of course, the better your grammar, the more you are well-read, and the better your overall habits, the less likely you are to be "found out".