James B. Stewart, of the New York Times, is confused

James B. Stewart, a writer for the New York Holy Times who is often fairly sensible, is confused.  I don't ordinarily read the NYT, since I prefer to read Obama's press releases without editorial reworking, spell-checks, and other modifications, but I saw this article in Starbucks and it jumped out at me.

The Republican Party has long claimed to be the champion of business, large and small, and an advocate for fiscal responsibility. Yet now Republicans in Congress have precipitated a shutdown of the federal government and are threatening to let the nation default on its once Triple-A-rated debt.

How could this be?


Let's disregard the unfortunate likelihood that this is all Performance Art, and that all of the useless and/or redundant Federal employees will be retroactively paid for their inconvenience.  Let's pretend that the Republicans are serious, and that they really will shut down the government, and default on some of the USA's bills.

I know it's a stretch, but let's pretend that there are some adults in those rooms. 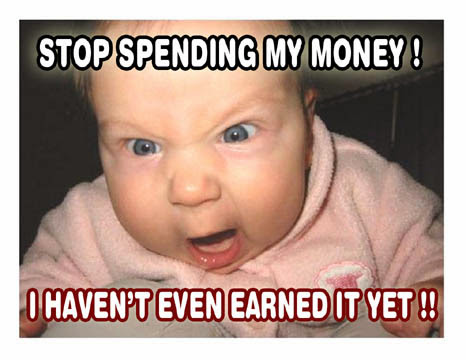 The debt is increasing by 1.75 billion per day.  As long as the Republicans and Democrats can keep borrowing, some foolish countries and businesses will keep lending.  (In reality, we're buying a lot of our own debt at the Fed, just to keep the bubble going for a few years longer.)  And the Fed is printing an extra 85 billion a month.  When the inflation hits, it's gonna be ugly, ugly, ugly.

Mississippi novelist William Faulkner once put an ad in the Oxford Eagle newspaper stating that he would no longer be responsible for his wife's spending and debts.

I wish I could do the same, and put an ad in the New York Holy Times for the benefit of James B. Stewart, explaining that I no longer wish to be held accountable for Washington's debts.  Let me pull out what I've paid into Social Security, without interest, and I'll be happy.

Please, do not voluntarily give them any money.
Posted by The Whited Sepulchre at 2:13 PM