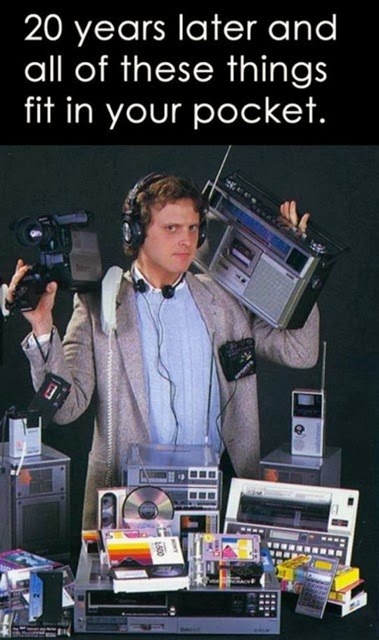 If you're a tech geek, you've seen this picture.  Let's start at the top left and go clockwise.  There's a videocam, a primitive jam box, a radio, an electric typewriter, a calculator, some VHS tapes, a VCR, some things I don't recognize, a digital recorder, a pager, and a camera.

We now have this.  It'll do everything shown above, will fit in your pocket, will probably last longer, and it costs a fraction of the gizmos shown above.  I'm not a techno-geek, and I've given up on going after the best stuff, so the phone I arbitrarily posted below is probably out-of-date already. 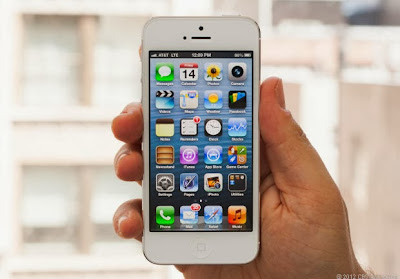 I've got a 3 or 4 year old Blackberry knockoff, and I'm still getting accustomed to the joy of pulling up "Map" and typing in "Haircut" or "bar" or "bourbon" and being directed to the nearest supplier.

Here's something from Gizmodo:


A company called Ampex put out the first "home entertainment" VTR in 1963, only it cost $30,000 in the Neiman Marcus Christmas catalog, and was nicknamed Grant's Tomb because the product manager who thought it up was going to be shoved inside by the company's accountants. (He would have fit, too, the thing was so big.) Sony comes along in the middle of that decade and puts out a $1,200 "portable" VTR that came with a leatherette case and its own TV. It still weighed 65 pounds.

No one intended the glorious destruction of the VCR/VHS/tape recorder/typewriter industry.  It just kinda happened.  People wanted to make money.  Others were just tinkerers.  And for the most part, they were left alone.  There was no Central Planner in Washington, overseeing the evolution of what you probably have in your pocket or purse.  No Technology Czar carefully planning each step of the demolition of BetaMax.   (Had there been a Technology Czar, you would still be watching  Betamax or VHS tapes, at best.  Do some reading on Regulatory Capture.  Regulators and Czars almost always wind up protecting the status quo.)

Here's a good summary of the undersigned, unplanned and spontaneous social order that many of us are still fortunate enough to live in.  Don Boudreaux at his best:

"....many people simply cannot conceive of social order that isn’t consciously designed and enforced by some secular creator (that is, by the state).  Most people are secular theists regarding social order.  Order must, for secular theists, be the result of a some higher power that designs, intends, imposes, and guides willfully the order that we see about us.  Without a higher secular power designing and keeping control of things, chaos or near-chaos would necessarily reign.

Get rid of this secular deity – or suffer it to fall under the influence of secular devils (for American “Progressives,” those devils today are tea-partiers) – and society must deteriorate.  Rules of the road would wither away, or certainly not be enforced; roads themselves would never be built; the electromagnetic spectrum would become a commons tragically overused (and, hence, rendered useless) by countless broadcasters scrambling for airtime; and automobiles – were they to exist at all – would be horrible death traps.

The great insight of the social sciences – which too few social scientists themselves get – is that society, to the extent that it is complex and functional, is necessarily the result of human action but not of human design.

Reasonable people can and do dispute how much sovereign intention and design are necessary or worthwhile to tweak, modify, polish, protect, top-off the emergent social order that not only did government not design but couldn’t possibly have even begun to design.*  But it is totally false and wrongheaded – yet it is the dominant view of almost everyone – that most of the economic and social order that we experience about us is the result of government and, hence, would necessarily disappear or collapse into disarray were government to disappear or fail to perform its duty well.

Sadly, most people are apparently just incapable of understanding that almost all social order emerges undesigned and unplanned.  Most people are and seemingly will remain naive secular creationists, ignorant that the forces of natural selection and evolution are constantly at play in society, and that these force are usually only thwarted or distorted by attempts to engineer society from on high.  And (here’s an irony) this sad ignorance of the nature of society afflicts even – perhaps especially – those people who have no difficulty understanding that very complex, beautiful, and highly functional non-social orders (such as biological order and the order of the cosmos) emerge unplanned and undesigned."

So next time you make a phone call, record a video, post a FB photo, send a text, snap a picture, get directions, post a blog rant, or watch a DVD, be sure to thank the person in Washington D.C. who didn't try to make it all happen.
Posted by The Whited Sepulchre at 6:25 AM