Are there any major problems not caused by government?

Gallup periodically surveys Americans about the worst problems facing the nation.  They divide the questions between economic and social issues.

Here are the top economic concerns. 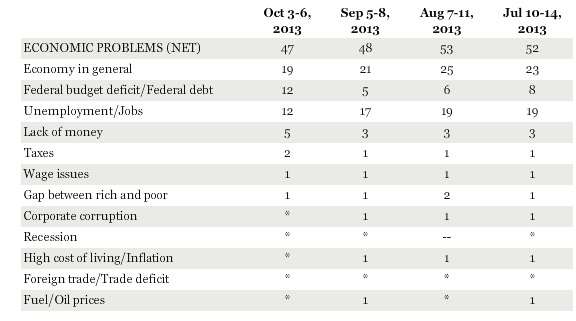 Let's start at the top.  What caused our current economic doldrums?  Was it the policies of Bush or Obama?  Or does it go all the way back to Alexander Freakin' Hamilton wanting a strong central bank?  For today's purposes, let's say that the economic slump was caused by government.

Number two on the list is our staggering debt level.  Which organization caused the Federal debt?  Starbucks?  The Koch brothers?  Wal-Mart?  Fox News?  Nope.  The government.

Number three is unemployment and jobs.  If there were no minimum wage, all labor markets would clear.  There would be something for everyone to do, with the exception of the handicapped, disabled, and Keynesian economists.  Prices for everything would drop.  It happens that way with every other commodity, and labor is no exception.

Number four.  Lack of money?  Hell, Ben Bernanke is print another 65 billion dollars every month !! There's plenty of money!!  Perhaps those surveyed meant that money their money is now worth less and less, a problem caused by the Federal Reserve.  Or maybe they intended to say that they don't have enough money to buy certain things whose prices have skyrocketed.  Same crime, same perpetrator.

Taxes?  That problem isn't caused by the Lions Club.

Wage issues are usually a personal problem, not a problem necessarily caused by Washington.  There is no alternative universe where low-skilled labor is valued as much as high-skilled labor.  However, the Teleprompter Jesus and his disciples are now lobbying for a minimum wage increase that will price even more low-skilled labor out of the market.  That will make "wage issues" even more of a problem caused by government.  I know that if Obama works hard enough, he can eventually make this worse.

There is a significant gap between the rich and poor, and it will continue to grow.  100 years ago, most of your customers, my customers, Bill Gates' customers and my readers lived within a few miles of you, me and Bill Gates.  We now reach the world.  If you're the best at what you do, the world is your oyster.  (I'm not the best, but Gates is, and you might be.)  However, there is another group of the wealthy that prospers because of theft.  15 of the 22 wealthiest counties in the US are those surrounding Washington D.C.

Corporate corruption is not a problem caused by government.  However, government spends a fortune regulating corporations, policing the stock market, and such.  I can't think of a single episode where, say, the Securities and Exchange Commission stepped in ahead of time and prevented a Lehman Brothers or Bernie Madoff debacle.

The others aren't enough of a concern to justify comment.  But I have to sound off on the "trade deficit".  For the 10,000th time, the trade deficit is a bogus number.  If we buy cars from Japan, we give them dollars.  They use these dollars to buy wheat.  When Japan buys wheat from the USA, they give us yen.  We use those yen to purchase cars.  It is balanced.  Nobody's ledger is in a deficit.  (There is something called the "current accounts deficit" which occurs when your politicians concern themselves with producing voters instead of goods and services.  Different problem.)

Here are our top social concerns: 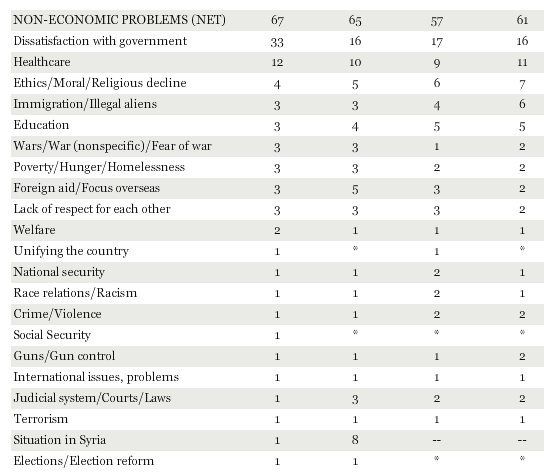 IMHO, the only two categories on this list that aren't caused by Uncle Sam are "Ethical/Moral Decline" and "Lack Of Respect For Each Other".

Let's look at those two a little closer - moral decline and lack of respect.  Imagine a grocery store that short-changes its customers.  One where the meat goes rancid within two days of sale.  Dream up a grocery store that routinely pays employees for only 39 hours of a 45-hour week.  How long would that grocery store be in business?

It would close within a few months.  No government intervention would be necessary.  Word gets out.  You have to respect your customers, your vendors, your employees - those who purchase your merchandise, provide your merchandise, and those whose labor your trade for.  Otherwise, you will go under.  That's how and why our various moral and ethical systems have evolved.

Next, imagine a president who routinely lies about his policies and his intentions.

Would you purchase anything this man is selling? 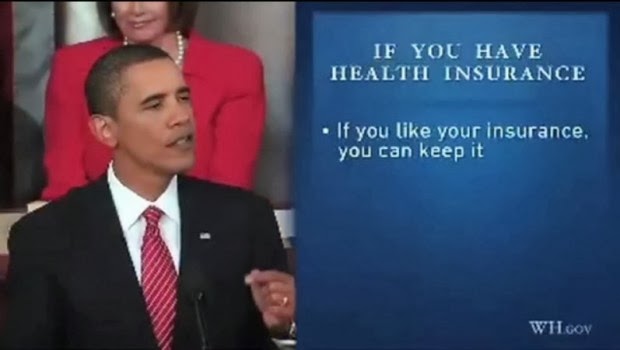 Very few other people would buy his crap either.

Fox News has published a different survey suggesting that "dysfunctional government" is the number one concern in the nation.
I don't know how this is possible.
It seems that our biggest problems are caused when our government functions perfectly and can get things done.
Posted by The Whited Sepulchre at 7:21 PM