This is from John Stossel's ABC News blog. (The essay, not the picture.) 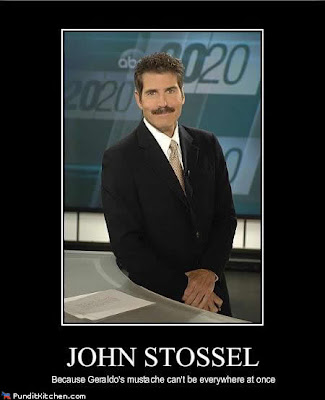 I've never seen this guy on TV since I don't watch much that isn't Tivo'd, but I'm a fan of his editorials, books, and website. It's sort of like being a fan of Winston Churchill's paintings, or Billy Bob Thornton's music. Here's Stossel on the Cash for Clunkers program:

Because sometimes, one billion isn’t enough.
The Obama Administration’s “Cash for Clunkers” program offers to buy used cars for $3,500 -$4,500 with taxpayer money. The government then destroys the “inefficient” used car. Not surprisingly, a lot of people want to sell their junk cars to the government. So many, in fact, that the $1 billion program has already run out of money.
Now it appears that Congress will ask not just for another billion, but another TWO billion. Look how generous Congress is with your money! 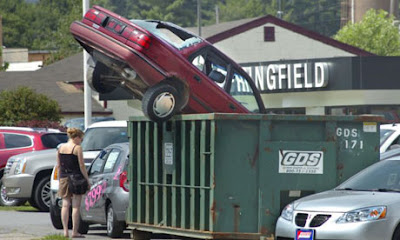 The idea is that by destroying used cars, people will buy new cars, which creates jobs. But this commits the “broken window fallacy”. That $3 billion taken from taxpayers to, essentially, destroy used cars now cannot be put towards college, or a new home, or new clothes, or anything else. Some used cars are no longer available for poor consumers to buy. If the “new car” market is helped by “Cash for Clunkers”, every other market is hurt because that $3 billion cannot be spent on anything else.

Here's Stossel's concise explanation of the Broken Windows fallacy, from an earlier post:
Economists call this the "broken window fallacy." In the 19th century, French economist Frederic Bastiat illustrated it with the story of a boy who breaks a shop window. At first the townspeople lament the loss, but then someone points out that the shopkeeper will have to spend money to replace the window. What the window maker earns, he will soon spend elsewhere. As that money circulates through town, new prosperity will bloom.
The fallacy, of course, lies in the fact that if the window had not been broken, the shopkeeper would have "replaced his worn-out shoes … or added another book to his library." The town gains nothing from the broken window.
This logic is lost on the stimulus promoters. I'm surprised they don't suggest that we prevent recessions by breaking lots of windows.
This is similar to the forklift program we took advantage of at my employer, Jukt Micronics. The government gave us a huge rebate in exchange for trading in our old planet-warming forklifts for new ones that also warm the planet, but not as quickly. That was their logic, anyway.
Which finally gets me to my point. We're dealing with a group of Chicago machine politicians who are looting The Treasury and giving the money to their contributors - in this case, the UAW and the Big 3 auto makers. They use the wholesome, environmentally-friendly bullshit to convince The Sheeple that this isn't a scam.
But isn't it an article of faith in the Mommy Party that we need fewer cars on the road and more use of public transportation?
Instead of the Broken Windows fallacy, that would make it a case of Anarchic Hand Syndrome. 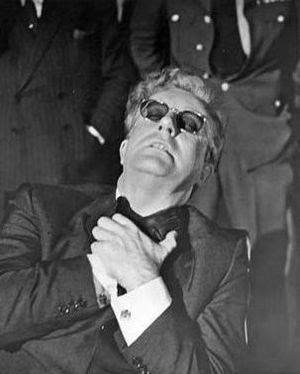 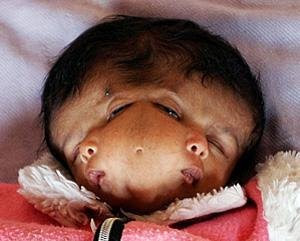 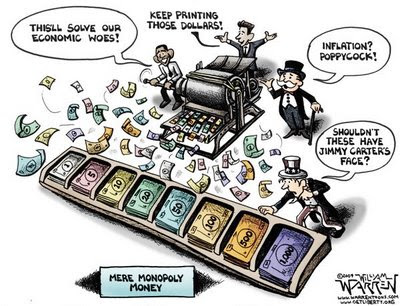 Anyway, I know something is wrong here, but what is it?
The Broken Windows Fallacy?
Anarchic Hand Syndrome?
Craniofacial Duplication?
or The Monopoly Money Fallacy?
Sometimes things are so wrong, one explanation can't cover it.
Posted by The Whited Sepulchre at 5:31 AM

"...improving energy efficiency releases an economic reaction that partially offsets the original energy saving. As the energy efficiency...improves, the process becomes cheaper, thereby providing an incentive to increase its use. Thus total energy consumption changes less than proportionally to changes in physical energy efficiency. This "rebound effect" is typically quantified as the extent of the deviation from proportionality. It has been studied in many contexts, including residential space heating and cooling, appliances, and transportation (Greening, Greene, and Difiglio, 2000). For motor vehicles, the process under consideration is use of fuel in producing vehicle-miles traveled (VMT). When vehicles are made more fuel-efficient, it costs less to drive a mile, so VMT increases if demand for it is downward-sloping. That in turn causes more fuel to be used than would be the case if VMT were constant; the difference is the rebound effect."

ok...that's it, I don't know Jackie D from slamiel-slamozial, and I don't swing her way, but I wanna marry her and have her babies!

Jackie D? You crack me the hell up, gal!

For those who don't operate on Jackie's level, please allow me to translate....
If you suddenly have a new vehicle that gets GREAT miles per gallon, are you going to drive it more or less than your old gas guzzler?

Jackie D says you'll drive it more. This is called the Rebound Effect.

It's kin to what the insurance companies call "Moral Hazard".

Anonymous,
I've met Jackie D. She is lovely, already married, and she already has babies.

Hey, thanks Whited, for the 'lovely' part. Don't get that much around here unless it is allowance payment day!

I meant to site my sources, important to give credit where due. So, here is the article where I swiped the quote and a couple of slides with the data.

I agree with your article, c4c is not going to improve the environment. It's also hurts used car dealers, auto mechanics, used parts dealers, the poor and charity car donation.