Save The Earth - Buy A New Hummer

This is the official list of the top 10 new vehicles purchased under the Cash For Clunkers program.

Now that is a wholesome looking list, wouldn't you say? Except for the Ford Escape (and maybe the Civic) it reeks of earth-saving virtue.
The downside is that it's the government's list you're looking at, and therefore it's total horse crap.

On a list like this, do you think it's honest to distinguish between the Ford F-150 with seats of rich Corinthian leather, and the F-150 with seats carved from the tanned, preserved buttocks of gullible Democrats? And dilute the sales of the F-150 by acting like those are two different vehicles?
Should Hummers with radio stations preset to National Socialist Radio, Air America, and 1360 AM Rational Radio count as different makes and models from the Hummers with stations preset to right wing AM rants?
Please stay with me. This is good stuff.

Wonder why the lists look so different? Here's CNN:

For example, the Ford Escape is available in six different versions including two- and four-wheel drive and hybrid versions. The government counts each version as a different vehicle using guidelines from the Environmental Protection Agency. Only the front wheel drive, non-hybrid version made the government's top ten list.

The Ford Escape crossover SUV, instead of being the seventh-most popular vehicle under the program, as the government ranked it, was actually the best seller, according to Edmunds.com. The government pegged the Ford Focus as the top seller.

But wait, there's more ! ! ! Want to get $3,500 off the price of a Hummer, virtually synonymous with gas-guzzling American excess ????


But will buying a new Hummer H-3, Chevy Suburban or Ford F-250 Super Duty pickup really reduce America's craving for crude? Somebody thinks so, because they're all eligible new cars under the Cash for Clunkers program, which gives a $3,500 to $4,500 credit to car buyers trading in older gas guzzlers for more fuel-efficient cars.

But a close look at what qualifies as "more fuel efficient" in the program reveals loopholes big enough to drive a GMC Yukon through (yes, that's eligible, too.) The guidelines in the House-passed bill state that large SUVs and trucks, typically considered gas guzzlers in everyday conversation, qualify for the $3,500 credit, and in some cases the $4,500 credit, depending on the trade-ins that come through the door for them. New Category 2 trucks -- like the Hummer H-3, Ford Explorer, Chevy Silverado, and Toyota Tundra -- qualify if they get at least 15 MPG combined, and get at least one mile per gallon more than the car or truck being traded in.

This farce has nothing to do with saving the earth. This farce is about saving Detroit for one more election cycle.

The next time you see someone in a brand new Hummer, the neo-fascist military limo, stop and make conversation with him. Ask him how he likes it. 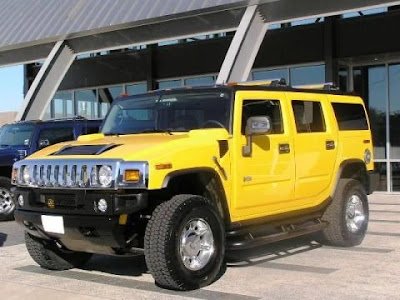 Tell him you hope he's happy with it. After all, you probably helped him buy it.
Fresh coats of Whitening all around to The Agitator and The Take for the links.
Posted by The Whited Sepulchre at 5:36 PM

Email ThisBlogThis!Share to TwitterShare to FacebookShare to Pinterest
Labels: cash for clunkers, Government Must Intervene, lying with statistics, total farces

Now, I will admit to going off half cocked here, but as I understand it, if you want to purchase a car that gets over 28 MPG, it won't be eligible. Why? Because that's the market segment that non-UAW, er, make that, non-US auto mfr's excel in. So, claiming that this is to help the environment is fakery at best.

Have I left anyone out?

I agree with the Whited guy...it was done to save the auto industry. I've read quotes all week, "This is the most people we've seen in show rooms in a long time...business is booming...yada yada yada." Also, this gov't "freebie" doesn't help the low income consumer...the ones who are probably driving the real clunkers. A friend of mine had her SUV repo'd...about 3 months ago. They purchased an old 1975ish pickup truck, got it running just for something to get them by. Her husband's out of work (oil industry) so now he's doing odd jobs to make the bills...cutting grass, basically honey do's. When she first heard about the program, she was excited...she thought they could use the old truck they purchased...nope. So, I'm watching pretty nice Volvo's getting their engines destroyed...ruining a perfectly good car, while my friend is riding around in a real death trap. Hmmm?

Doctor,
I don't hate the government, but like my waistline, I wish it were smaller.
I don't hate Obama, I just wish he would get more rest, spend time with the family, and try to do a little less.
I don't hate Detroit, and have made two nice trips up there. Unfortunately, they have retirees who are the same age that I am. In the words of the "NPR Sustainability Desk", that ain't sustainable.
I don't hate unions, but have a strong dislike of all monopolies.
I don't hate liberals, mostly because I am one. (Take the test to your right, if you haven't already.)

The point of the post is that we've heard a lot of earth-saving righteousness from our government employees in the last week about how the Cash For Clunkers program was about saving the environment.
Any SAVE THE EARTH program that forces me to subsidize someone's Hummer purchase is about no such thing.
It's about increasing Hummer sales.

I'm eager to see the additional mental gymnastics Doc will pull to avoid admitting he was wrong on this one. His first response came right out of the Progressive Playbook, i.e. "You're mean and hateful!"
Be a man, Doc - cede the point to the Whited One.
;^)

Okay -- I concede: I know the Whited Sepulchre is not mean and hateful...I don't think he's got a mean or hateful bone in his body. But he's certainly got that wingnut hysteria thing down pat.

I'll also agree the Clunker Program is pandering to the Bubbas. In fact I recall making that statement elsewhere, before I got called on my own mean and hateful nature. Come to think of it, I've said all of this elsewhere. Once again, I'm experiencing Deja Vu, WS style.

Misguided -- that's the word I should have used, since he's definitely misguided on this one.

Sigh...sometimes I don't know why I even bother to comment.

But that's okay -- I love the big goof anyway. He may be full of shit occasionally, but the man's eloquent.

Doctor,
Please don't get me wrong about one aspect of the program - and that's whether or not it has been a success or a failure. It has succeeded beyond their wildest dreams. It was supposed to last until Halloween, but managed to achieve the stated goal within a week. More funding is needed so the success story can continue.

Next point, about whether I lapse into mean-spritedness....I really don't see myself that way. BUT....when I saw that my Ford F-150 Monster Truck was on the Edmunds list of top selling eligible vehicles, it took me to a new level of joy, joy that I hadn't known since they released Al Gore's electric bills.

The scariest part of all of this? People are starting to think there will be a Republican landslide next October. Meet the new boss, same as the old boss.

You want the Republicans back? Keep bitching. Which in your mind is the lesser of two evils?

Alas, I've said more than I should have on this subject since I'll never change any opinions.

I think I'll go write about Linux or something for a while. Now there's where you find some flame wars!

I have been in search of such interesting Articles, I am on a holiday its good to see that everyone are trying their best to keep up the Spirit by having such great articles posted.

Cheers, Keep it up.

I have been in search of such interesting Articles, I am on a holiday its good to see that everyone are trying their best to keep up the Spirit by having such great articles posted.

Cheers, Keep it up.

Edmund's has now committed a second act of Cash for Clunkers blasphemy.