Hell, let's put tariffs in place between Fort Worth and Dallas

Don Boudreaux, economics professor at George Mason University, reminds me of an abusive husband.
Every morning of his life, he gets out of bed, takes a shower, eats some breakfast, brushes his teeth, and then kicks the living snot out of New York Times economics columnist Paul Krugman.

In his New Year’s Day column, Paul Krugman argues that protectionism can create jobs in times of unemployment. (Lots of other problems plague this column, by the way.)

If Krugman is correct, why stop at national borders? Just think how many jobs Congress could create by encouraging states to erect their own tariff walls? High-taxing and heavily regulating states would then be able to protect their workers from states with lower taxes and less-burdensome regulations. California wineries would never again lose market share to rivals in Oregon and Washington state. Michigan autoworkers would never again be displaced from their jobs by workers in Tennessee and South Carolina. 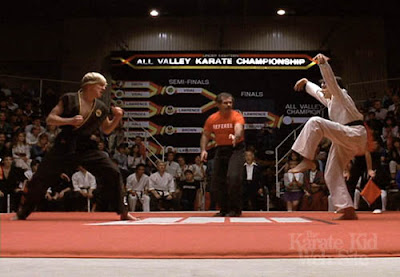 Given Krugman’s assumption that restricting consumers’ freedom to make cross-border purchases increases the total number of jobs in economies suffering unemployment, why let all those borders between Maine and California go to waste? Turn those borders, too, into barriers to trade and watch American employment skyrocket!

Go here for another excellent post called "Nation's Don't Trade With Each Other: Individuals Do".

If that's not enough, go here, and read Fabulous Freddy Bastiat's idea for an un-railroad. (First published in 1845, BTW.) This is a railroad that would allow cheap and easy transportation between countries, so they could enjoy the benefits of each other's strengths. But the railroad would be closed in all places where it would hurt local inefficient producers. (This would create and save jobs ! ! ! !) In other words, the railroad would be closed in all the places where it was most needed.

Tariffs serve no purpose but to negate the gains provided to society by technology, labor, ingenuity, determination and progress.

You read something like this, and wonder how Paul Krugman ever won a Nobel Prize.
Oh.... Never mind.

Posted by The Whited Sepulchre at 9:15 AM