It Takes A Village

The number of young Americans without a job has exploded to 53.4 percent — a post-World War II high, according to the Labor Dept. — meaning millions of Americans are staring at the likelihood that their lifetime earning potential will be diminished and, combined with the predicted slow economic recovery, their transition into productive members of society could be put on hold for an extended period of time.

The number represents the flip-side to the Labor Dept.'s report that the employment rate of 16-to-24 year olds has eroded to 46.6 percent -- the lowest ratio of working young Americans in that age group, including all but those in the military, since WWII.

I think these dismal numbers are a direct result of this. The Minimum Wage was increased last year. If you want to hire a totally inexperienced kid, you have to pay him what Congress thinks he's worth, not what you are willing to exchange for his labor.
Raise the price of something, relative to everything else, and demand drops.

Here's a chart from Gateway Pundit, showing what the electoral map would've looked like if no one had voted in 2008 except 18 and 19 year olds. 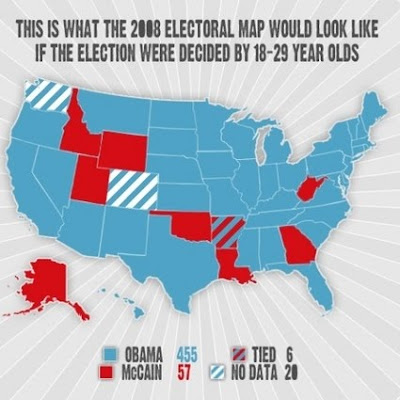 Thank you, Congress and President Obama for teaching our kids a valuable lesson: Elections Have Consequences.

Seriously. Thank you. We couldn't have taught them this without your help. "It Takes A Village. "

A 572nd coat of Whitening to Instapundit for the links.

Posted by The Whited Sepulchre at 7:26 AM

Email ThisBlogThis!Share to TwitterShare to FacebookShare to Pinterest
Labels: Government Must Intervene, It Takes A Village, Law of Unintended Consequences, minimum wage

Hard for adults with college educations and years of experience to find a job too! The current economy or no net job growth in the last decade couldn't have anything to do with this.

I expect that there are many factors with the minimum wage only being one. Also to consider is the dismal state of education, so employers often feel as if they are going to have to train teens to do very basic tasks, like counting money. There are also a number of laws that dictate to employers when teens are allowed to work, how many hours a week they can work, etc. Who wants to deal with all of that crap for an employee who is most likely going to do half-ass work and think they are worth $7.25. Then to top it off there are so many unemployed right now just due to the state of the economy that even crappy jobs that have traditionally been the domain of teenagers are being sought after by older people.

Flee,
It's funny how these downturns for employment seem to clump themselves around mandatory wage increases. Hong Kong, for instance, used to have no minimum wage at all. They had virtually no unemployment. They did the civilized thing and set a minimum. Unemployment jumped to 6%.

Fester,
Having taught I-don't-know-how-many-graduates how to read a freakin' tape measure, all I can say is that I agree.
China beckons.

Prior to the minimum wage laws in the U.S. (see the Davis/Bacon acts), African American unemployment was almost always lower than white unemployment. Makes you wonder why the white folks implemented this system doesn't it?

Whited, I had a dude that worked under me that was a complete idiot. I sent him to the truck one time (just to get him out of my hair) to get a 2/4" socket. He came back about 15 minutes later and told me he couldn't find one. I sent him back for a 4/8". I did not see him for 30 minutes. Puuthetic.

I worked in human resources for a company for 3 years here in Dallas.

We didn't ask much of our new employees, but they had to be able to calculate simple percentages. (using a calculator).

The people we would get would lack such basic math skills as even "estimation" that my first question was always, "What is 10% of 100?" Keeping in mind that these were high school graduates, about 10% of the applicants got it right.

We're all finding that it takes a village to raise an idiot. It takes a family to raise a person who can do some contributin'! And cipher them tough math problems - like 10% of 100!

Wow. I've got Kerrcarto and John Jay in the same room.
Gentlemen, leave your coats in the lobby, there are drinks to your left, and an assortment of chips and dips to your right.

This is off-topic, but having worked around farms, shipping, warehouses, etc most of my life, here are my favorite tricks I've seen played on rookies. Slightly off topic, but hey, we're having a good time:

1) Sending the kid out to change the spark plugs on a diesel engine.
2) Kerrcarto's 4/8ths, 50/100ths 2/4ths business. (My guys usually ask for a 6/16ths.)
3) Sending someone to Home Depot to pick up an aerosol can of Board Stretcher.
4) And in a role-reversal, I once saw a young journeyman electrician send AN ADULT BAYLOR GRADUATE to the tool room for A METRIC CRESCENT WRENCH.

keeping off topic. The best rookie prank I have ever heard happened to my brother-in-law they sent him out for some K9P. He told me he thought it was a type of locktite. It always cracks me up to think about him asking for some help finding the K9P. He is pretty smart though, so I think this falls more into the category of being pranked more than ignorance.