From the Fort Worth Star-Telegram:

ARLINGTON — A city judge on Thursday levied the maximum fine — $15,500 — against a property owner who provided unauthorized parking on his land for Cowboys Stadium events.
A six-person Municipal Court jury took 40 minutes to find Michael Anthony Caldwell guilty of 31 misdemeanor counts of violating city permit requirements. The rules were adopted last year to regulate pay-for-parking operations in the entertainment district.

And why, you ask yourself, did those parking lots need regulating?

The 31 tickets were just a fraction of Caldwell’s violations, officials said. He has about 360 tickets pending with potential fines totaling $180,000.
Caldwell has 30 days to pay Thursday’s fines or arrange a payment plan, Municipal Judge Stewart Milner said.
After the trial, Caldwell said he still plans to offer parking on his 1-acre lot, at 210 E. Randol Mill Road, for the NBA All-Star Game at the stadium Feb. 14.
He said he will appeal the verdict and fines and then will likely sue the city, challenging the ordinance as an unfair restriction on business.
Caldwell, 50, who said his occupation is running a Dallas hotel and booking special events there, acted as his own attorney during the trial.
Before setting the maximum $500 fine per ticket, Milner scolded Caldwell for refusing to heed the repeated warnings of code enforcement officers who were among about 10 city officials who testified during the one-day trial.

Ten city officials? Ten of them?
Arlington, Texas, has that many people drawing pay, pensions, and other expenses who are worried about a guy using his land the way he chooses, providing a service that people consider themselves lucky to use?
Is there any doubt in your mind why Arlington TX needs every fee, tax, permit and kickback it can possibly find?

"There are ways if you don’t like an ordinance to address those issues," Milner said. "To simply thumb your nose at the system and say 'I’m going to keep doing this’ is not acceptable."
During in his brief opening comments to the jury, Caldwell said he and other property owners "believe you have the right to do whatever you want to with your property."

Hell yes, they have that right. I think this is the perfect issue for the Libertarian Party in the 2010 elections, don't you, Mr. Spivey?

He tried to focus attention on the fairness of the ordinance but faced objections from prosecutor Elisabeth Kaylor, who said Caldwell’s point was irrelevant.
Milner agreed.
Caldwell ended up submitting no exhibits, testimony or closing argument.
Milner urged Caldwell to hire an attorney before challenging the rest of his tickets.

Well of course he did. If we're talking about this Judge Stewart Milner, it's because he's a lawyer. He wants people to hire lawyers for the same reason that I want people to hire freight brokers.

It was the city’s first prosecution of a case involving the special-event permit ordinance.
The city has 97 permitted parking lots, providing nearly 12,000 spaces. Caldwell’s site is among 14 unpermitted lots identified on the city’s Web site.

Jerry Jones and the City Of Arlington charge up to SIXTY Freakin' dollars to park a car. I wouldn't pay $60.00 to see The Resurrection, much less park my truck outside the tomb. Is there any wonder why they're wanting to put up barriers to entry for parking competitors?

Caldwell does not qualify for a permit because he does not have a permanent building and business on the site. A building that had been there burned down.

Can someone tell me how a Taco Bell in the middle of a parking lot improves the parking experience? Does it make it safer? More wholesome? Does it help immerse the Cowboys Fan in that down home Arlington Texas goodness?

City Attorney Jay Doegey said the purpose of the ordinance is primarily to protect the public from shady practitioners. But it also gives existing businesses a chance to benefit from the stadium and doesn’t encourage the expansion of lots just for parking.

Here are some questions for you, Jay Doegey. Is it your land? No. Is it any of your business what Mr. Caldwell chooses to do with his land, as long as it doesn't cause physical harm to anyone else? No. Will the area surrounding the new Cowboys Stadium be a parking lot wasteland within 10 years anyway? Yes. Please stop pretending that the stadium will be a boon to retailers and restaurants. That was just marketing. Please give Mr. Caldwell his money back.

"This is an important case for the city," Doegey said. "If the jury didn’t support us on this, it would encourage people not to comply with the law."

Mr. Caldwell was providing a service for people who were glad to find him. Having to purchase unnecessary permits from the City Of Arlington is no different than paying protection money to the mob. Exhibit A: Go here to witness Jay Doegey in action, in what many think of as aiding and abetting in land theft.

One other thing....This is the Wal-Mart Supercenter that had the misfortune of being located next to the Jerry's Kids land grab. I'm hearing that this WalMart won't be open long. I bet it will be one of those "lots just for parking" once Wal-Mart vacates Jonestown North. And I bet Arlington can't find a "permanent business" to occupy the building. Wagers, anyone? 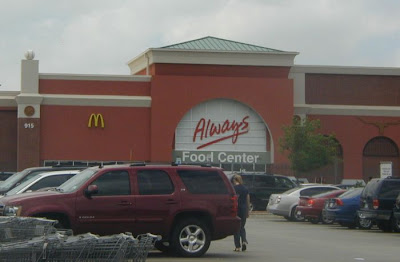 The picture, along with so many other good things in life, came from Durango Texas. He's got great pics of the forced evacuation of the North Arlington indigenous people, the destruction of their habitat, etc. Makes you wonder if Jay Doegey is Jerry Jones' avatar, doesn't it?
Posted by The Whited Sepulchre at 8:33 PM

Yes sir.. It is a great platform for us in May elections!! We need to recruit more Judicial candidates!!

Actually, this looks like a case for The Institute for Justice!!! The IJ is just one of my favorite organizations in the world!! As you may know, they take on cases like this, many pro-bono, of situations where local regulations, codes, licensing laws, etc. are preventing people from enjoying their private property or pursuing business opportunities. The size of the business is irrelevant... they've represented decent sized companies and one person operations, just like this.

Since Jerry Jones is attached to this - it's got 'Back Page Ad for Reason Magazine' written all over it.

I'm contacting them now. Of course, that doesn't mean anything, but still...

"the purpose of the ordinance is primarily to protect the public from shady practitioners."

That's the standard lie given when crooked politicians and their cronies want to exclude competition. If you're ever on a jury for a case like this, demand that the prosecutor show you a victim.

Whited will vouch for me - I am really trying to learn about and understand the Libertarian tenets, I might have met some of you at last week's meet-up were it not for a sick child. So, take my question at face value, please!

Do Libertarians support/promote breaking the law when the law is not what you believe in? Do you support any restrictions of land use?

Harper,
Let's call Mr. Caldwell's actions a great case of Civil Disobedience. The most familiar case is probably the African Americans who were legally prevented from using certain facilities, eating at certain lunch counters, etc. The publicized the injustice of the law by breaking it.

Regarding the generic "what if" question, check out Houston:

Hey Harper. First, hope your kid is doing better! To your question about supporting or promoting. I certainly support Mr. Caldwell's right to use his property in any way that doesn't harm his neighbor. So to Allen's point, I'd love to see this get to the SCOTUS. Although, after Kelo, it may be that it's not all that great regarding cases of big corporations vs. A guy who owns a piece of dirt.

Had Rosa Parks, MLK, Thoreau, and other civil disobeyors (is that a word?) not broken unjust laws, who knows how long segregation an Jim Crow Laws would be in effect? Thoreau protested taxes - I'm still waiting on his protest to win out.

I hope he doesn't get crap. He "OPERATES" a hotel. That's funny I'm a former employee and that man does about a good of a job as a blind man does operating a motor vehicle. He is a lying, uneducated bastard who only worries about himself and himself only. His hotel is one of the worst if not the worst in all of Dallas. He refuses to acknowledge employees for a good job, is never around when a guest has a complaint( which occurs often). He is always to busy to interact with the guest and is to busy doing irrelevant things that doesn't benefit his hotel what so ever. Talk to his current employees and they will tell you the same thing, HE'S WORTHLESS!!!