A belated review of the 9-12 rally and protest, from Liberty Magazine

The December issue of Liberty magazine had a short piece by Martin Morse Wooster, an Amtrak traveller who happened to be in The Town Of The Cow on September 12 last year.
I know, I know.  I'll get it out of the way now....
What the hell is a libertarian contributor to Liberty magazine doing on Amtrak, when there are so many less expensive, less harmful, less wasteful and less offensive forms of transport available?  Lordy have mercy, he could've brought starving orphans in from Haiti and paid them to pull him around on a rickshaw, and it would've seemed downright egalitarian as compared to freakin' Amtrak.  Hit that link to see where I'm coming from.
Oh well.  I've had to express contrition for allowing vendors to take me to Cowboy games at the Debt Star.  I've expressed remorse for benefitting from farm subsidies in my wayward youth.  A few times I've even shipped freight on a union-operated LTL carrier.  We all have skeletons in our closets, and all of our Sepulchres could benefit from Whitening.  I trust that Martin Morse Wooster will eventually have a Tiger Woods-style press conference to explain what he was doing on that vile train.

Big tent — I’ve recently returned from an 11-day train vacation. One thing you learn when on long-distance trains is that whenever Amtrak changes crews, it’s time to get out and look around, in the hope of finding better (or at least different) food than Amtrak offers. So when I had an hour’s layover in Fort Worth, I decided to head for some tents nearby. They looked like a farmer’s market, and I’m always happy to support local farmers.

What I found was the Fort Worth 9/12 demonstration. 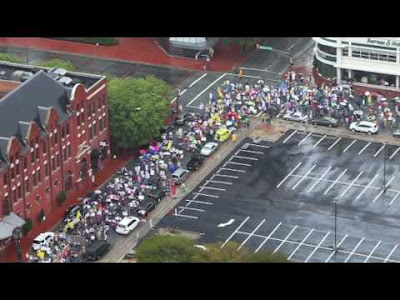 There’s been a good deal of press about tea parties, 9/12 rallies, and the like. I’m sure there are “fringy” people at some of these events, but it wouldn’t surprise me if journalists found the three weirdest people at a demonstration and used their remarks to paint a portrait of a frothing right-wing mob.

I didn’t see a mob in Fort Worth. The crowd, which was in the thousands, was civil. I didn’t see any banners comparing President Obama to Hitler or calling for killing anybody. There were many banners mocking the president, but the last I heard, questioning authority wasn’t yet a crime.

Most of the 9/12 people would say they were angry, and I talked to a woman who was proud to be “the angriest person in Stumptown, Texas.” But it’s important to note the difference between anger and rage. I didn’t see any red-faced screamers, or anyone who was about to pop a blood vessel. Most of the people I talked to were having a good time, marching in the rain on a muggy Saturday afternoon. 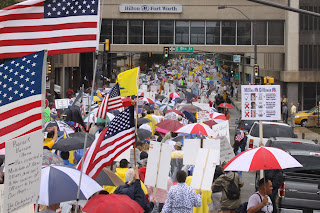 I didn’t take a count, but it appeared that the protesters were about equally opposed to the healthcare plan, the stimulus, and high taxes and big government in general. Some of the marchers had concerns that seemed a little eccentric to me (I wished I could find out the concerns of the gentleman whose banner read “No Cass Sunstein”), but I agreed with nearly everything the protesters said.

There were booths for several Republican candidates for the Texas state legislature as well as one Libertarian Party booth. But no one was marching to support a political party. All were against specific administration programs and big government in general.
(If you blow up the pic above, there is a Debra Medina sign on the right.  One other thing about that pic.  You can only see one protester's face, and he's in the botom right hand corner.  Note to Keith Olbermann: He ain't white.)
As I left for the train, the marchers went to hear a speech by Fox News Channel commentator Andrew Napolitano. If his interview in Reason is typical of his thinking, Judge Napolitano seems like a sensible person. I’m sure he gave the marchers good advice.

I’m not a pundit, so I don’t know whether the 9/12 movement will amount to anything. But what I saw in Fort Worth is that there’s a lot of anger against the Obama administration’s relentless efforts to bloat the government. Most of that anger is justified. Administration strategists — and their allies in the press — who dismiss this anger or pre-tend that it doesn’t exist may find themselves looking for work in January 2013. — Martin Morse Wooster

That's the way I saw it.  A lot of concerned people voicing their discontent.  The problems still haven't been dealt with, and these are the only people offering serious objecting to the looting going on in Washington.
And for those of you who participated....can you imagine being a writer for liberty-oriented periodicals, getting off a train to stretch your legs and find something to eat, and then walking into the middle of that protest?  It must have seemed surreal.
Good essay from Mr. Wooster.  I've been waiting a long time for it to appear in the Liberty Online edition so I wouldn't have to re-type the whole thing.
Here's a video they made to promote the event.  That's my friend Adrian Murray, giving them hell at the end.

Posted by The Whited Sepulchre at 2:53 PM

Anyone who seriously believes that statement is either a hopeless idealogue or an uninformed fool.