John Stossel on Pharmaceutical Regulations - Who owns you?

John Stossel's program last night was about the regulation of the pharmaceutical industry, and the FDA (and DEA) witholding medications that can save lives, prolong lives, or at least ease pain.

It will be replayed several times between now and next Thursday.  Please, please, please TIVO it.  If I ever earn enough money, I'm going to set up a college scholarship for the high school students who write the best essays about this rare hour of good television.

There was a recent Harrison Ford/Brendan Fraser movie on the subject of the government witholding approval for medications.  It's called Extraordinary Measures.  Here's the trailer:

The movie asks this simple question: "If my children are dying, who the hell are you to tell me what meds I can and can't give them?"  The father of the kids featured in the film, John Crowley, was a guest on the program.

Stossel showed several clips of Bruce Tower, a guy with prostate cancer.  There are several promising drugs currently being tested on other cancer victims, but the FDA won't allow this dying guy access to them because they might not be safe.  Swear to God.  Tower asks the question "If I'm dying, who the hell are you to tell me what meds I can and can't take?"

Stossel told of a drug that the FDA finally released after a ridiculously long testing period.  The FDA claimed that it would save the lives of 14,000 women per year.  Stossel then asked a great question.  If women were asking for the drug prior to it's approved release, should the FDA be blamed for the murder of 14,000 women per year?

If you're dying, and are in terrible pain, who is the FDA to tell you what you may and may not ingest to ease your pain?

If Montel Williams (a Stossel guest) and Melissa Etheridge both suffer from conditions that they claim are improved by smoking marijuana, and they smoke marijuana, does this harm you?  Does it harm the FDA?  Does it harm the DEA?  I think not.  So why do we tolerate these people who claim to own us?

Stossel didn't ask this one, but I will.  Why do so many of the people who claim to support A Woman's Right To Choose then turn around and defend the nanny state's intervention in so many other choices? 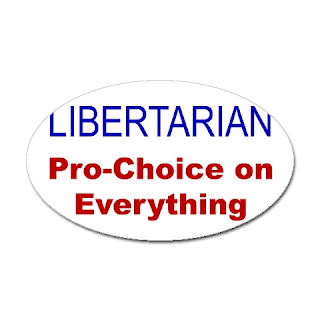 Go here for a transcript of a Bill O'Reilly/Stossel interview on this subject, in which John Stossel takes O'Reilly's lunch, carves it into small bites, dips it into Ranch dressing, and consumes it with gusto.

Make a note to yourself. Set you TV to TIVO this NOW.
Posted by The Whited Sepulchre at 7:28 AM

Note to those trying to Tivo the repeat episodes: You might want to Tivo a couple of them because sometimes, especially with the LAST repeat, FOX Biz will do the ol' bait and switch on you, and you will NOT get Stossel, you'll get on of their other programs.

Subsequently, your TV may become in mortal danger from projectiles.

My wife watching this asked the $9 Trillion question "Why doesn't John Stossel run for president?" "There's only one reason he doesn't", I said. "He has a moustache."

I'll tell you who will tell you what you can have and what you can't have, the insurance companies, they are the ones that own you too. You have no choice, if you're lucky you are offered insurance through your employer which you will have still have to pay thousands of dollars a year for. Then when you go to use the insurance you'll pay a $2500 deductable then a 20% copay up to the next $2000. They want to up the deductables to $5000 and copays to 35% of the next $3500. Many are stuck in jobs just because they cannot afford to lose the insurance, where is the freedom in that?

You sir, have done the impossible.

For once I found myself agreeing with Bill O'Reilly.

Please, please, never do that again.