The Neighbor In A Cage test

Here's a good rule of thumb for any government project, from NRO's Kevin Williamson.  If someone absolutely refused to contribute to the project, would you be willing to lock him in a cage until he did so??

....The resort to violence is what makes the question of what kind of things it is legitimate for states to do an important moral concern. It seems to me perfectly reasonable to shove a gun in somebody’s face to stop him murdering, raping, or robbing. It seems to me entirely unreasonable to shove a gun in somebody’s face to extort from him money to fund a project to get monkeys high on cocaine.   (Or to fund a project about African Genital Washing - TWS)  Those seem to me fairly reasonable distinctions. It is illegitimate for government to use force or the threat of force for projects that are not inherently public in character.


The question of how much illegitimacy a state may perpetrate before becoming generally illegitimate itself is of real interest and has been, of late, the subject of some spirited discussion between some of my colleagues here and me. (You probably can guess on which side of the fault line I stand.) 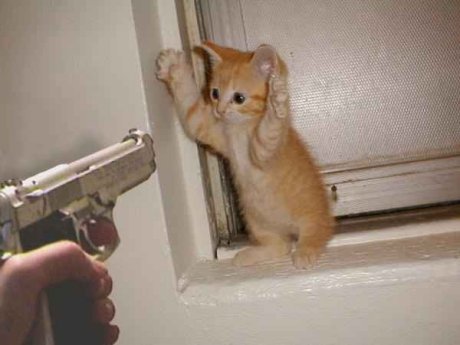 But I would like to make it clear that I am not indulging in a figure of speech: I think it’s a pretty useful heuristic: If you’re not willing to have somebody hauled off at gunpoint over the project, then it’s probably not a legitimate concern of the state.

This is the sort of talk that gives (his Statist opponents) the howling fantods, inasmuch as they seem to operate under a kind of distributed version of the divine right of kings — always asking whether the rulers rule wisely, seldom asking whether they have the right to rule at all, and never asking whether and how much we actually need them.

So....would you be willing to throw someone in jail if he refused to help pay for The Lawrence Welk Museum?  If not, then we probably don't need the government involved in the project.

Say your neighbor wants no part of paying for the Charles B. Rangel Center For Public Service, one of the most gloriously mis-named abortions since the Employee Free Choice Act.
If your neighbor refused to pay one dime toward this memorial to a jackal, would you be willing to lock your neighbor in a cage until he changed his mind?  If not, then perhaps the students of Charlie should pay for Charlie's school.

From now on, this concept will be called the "Neighbor In A Cage" test of government spending.

Ok, let's keep going.  If Timmy The Tax Dodger Geithner wanted to back his getaway car up to The Treasury one more time for one more stimulus package, and the little old lady down the street thought it was a total ripoff, would you be willing to throw her in jail for not paying the taxes to support it?  I think not.

Out of fairness, let's try this one.  New England is invaded by Canada.  The Canadians are headed southward.  If your neighbor refuses to contribute to the defense of the U.S. in this situation, would you be willing to throw him in jail for not paying his taxes?  I probably would.  You might.  Therefore, there's a possibility that defending the U.S. against a Canook invasion is a legit function of government.

The picture of the kitten being taxed came from here.
Posted by The Whited Sepulchre at 8:33 PM

Email ThisBlogThis!Share to TwitterShare to FacebookShare to Pinterest
Labels: hypothetical questions, Neighbor In A Cage, taxes

Depends... How far south have the Canadians gotten? Oh. About to hit the Red River? OK, finally time to kick in with the "giving".

I think that's a pretty good acid test for most government programs.

What I find most annoying is that the gum-mint actually DOES send men with guns to lock people in cages for actions the consequences for which Tim Geithner, Charlie Rangel, Barbara Boxer, Hillary Clinton, et. al. have escaped with impunity.

TLG,
You can't imagine how many times I re-wrote that. I kinda got carried away with the idea of Canadians burning Washington, much like the British did in 1812.
Deleted all of it.

I have a persistent curiosity as to how the majority will respond if the ruffians of liberalism are able to take-over the coming election and win the votes by their usual underhanded tactics.

The Canadians are much too polite to invade us. Not to mention sensible -- after watching a few hours of Fox News I can't imagine they'd want to have us.

Here's a counter question: what about the legitimacy of the Federal Government spending taxpayer dollars to enforce laws that run counter to the local popular will? Like say in Little Rock, Arkansas, 1957? Or Oxford, Missisippi, 1962.

I'm sure the locals there would have had a completely different take on your rule of thumb than me (and perhaps even you).

For the record, I think your test is a trifle ridiculous. So much chest thumping is going to give you bruises.

BTW -- I saw Ken Burns (the documentary filmmaker) in Arlington and he put it like this: "If your house catches on fire, the free market is not going to put it out."

"If your house catches on fire, the free market is not going to put it out."

On the contrary, Ben Franklin helped organize one of this country's early fire departments. It was entirely voluntary and self-funded - a pretty good definition of the free market.

"Members of the fire company pledged to help one another should fire break out or threaten one of their homes or businesses. Not only would they attempt to put out the flames, members would also help save goods within the building and protect the building from looters. Members were not required to help protect properties of non-members."

In the same vein, I live out in the country. We do not have a local taxpayer-funded fire department. Instead, we have formed a local volunteer fire department. We fund it through donations, fund raising events, and the like. We do, however, respond to fires at the homes of people who have not contributed to the VFD.

Not to wander too far from the initial topic, but when I was a kid we moved from Texas to the Chicago suburbs (this was the mid-sixties).

I was shocked when someone pointed out to me that black families would not move to white communities with only a volunteer fire departments for fear that, should their houses catch fire, none of the volunteers would show up.

Who needs Jim Crow laws when you can let the Free Market do your dirty work.