And you thought the Democrats were the big spenders?

In the last week, a lot of bandwidth has been wasted over which president caused the biggest spending increases.
Rex Nutting of Market Watch published a graph that looks like so.... 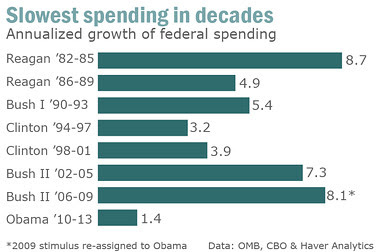 Parts of this silliness (the Obama part) were promtly blown out of the water by Yossi Gestetner at The American Thinker.

1) While in regular times a budget gets approved months earlier, the FY2009 budget was pieced tighter in many separate votes and bills, one of them signed on... March 12 2009 by... President Obama! AP wrote back then the "bill includes significant increases" on a host of things. But of course it's Bush Fault. Right?

2) Obama was a member of the Senate Majority who... approved the FY2008 and FY2009 budgets. It's of his making either way. He didn't arrive to Washington in January 2009 as a Governor. Senator Obama in the majority party since 2007 created the mess together with Pelosi and Reid.

3) Much of the 2009 spending (from TARP, to Stimulus, to Auto Bailout, to Loan Modifications), were officially one time things. However, four years later and we are still spending well above the 2008 levels. A Spending Binge indeed!

4) Much of the 2009 spending were officially "loans" and "investments" that Obama claims were "paid back" by the Auto Industry and others. As such, it's inaccurate to claim that all the money that left Treasury in 2009 was "spending."

5) Even if you want to ignore all of the above notes; a headline reading "Obama Didn't Increase Spending Much Since 2009" would have been more accurate. But to suggest that we are not on a Spending Binge just because Government outlays didn't increase much since the year that we spent officially on one-time things and loans is spin of the highest order.

This guy has a slightly different take:

But here's what nobody is arguing. Look at the percentage increases under Reagan, Daddy Bush, and Little Bush's first term.  (Yeah, yeah, yeah, Congress does the spending. But the president sets the tone.)

As Veronique De Rugy has pointed out multiple times, if you want to increase government spending, elect a bunch of Republicans.

It really is that simple. Any time you hear someone describe himself as a "Reagan Republican", imagine a meth addict with stolen credit cards. Your credit cards. And you can't call Visa or Amex and report them stolen. You are the one who gave them away. We really shouldn't have co-signed on that loan with the Republican Party.

And one day the mailman WILL arrive with the bill.
Posted by The Whited Sepulchre at 7:35 AM

Tsk! This image shows how disappointing how government works.