What is the economic system in the United States?

I don't know if I could answer this Citizenship Test question correctly.  Lordy, who knows what the answer is going to be in a few weeks? 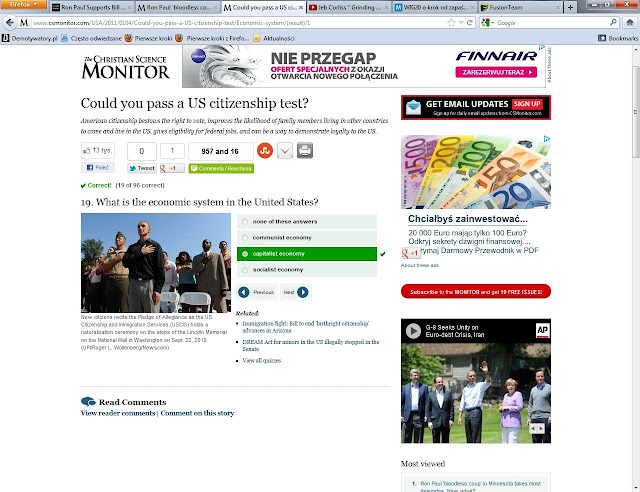 Here's a definition that I've enjoyed posting every couple of months.  (If I'm not mistaken, the entry was written sometime during Bush's last year.)


As an economic system, fascism is socialism with a capitalist veneer. The word derives from fasces, the Roman symbol of collectivism and power: a tied bundle of rods with a protruding ax. In its day (the 1920s and 1930s), fascism was seen as the happy medium between boom-and-bust-prone liberal capitalism, with its alleged class conflict, wasteful competition, and profit-oriented egoism, and revolutionary Marxism, with its violent and socially divisive persecution of the bourgeoisie. Fascism substituted the particularity of nationalism and racialism—“blood and soil”—for the internationalism of both classical liberalism and Marxism.


Where socialism sought totalitarian control of a society’s economic processes through direct state operation of the means of production, fascism sought that control indirectly, through domination of nominally private owners. Where socialism nationalized property explicitly, fascism did so implicitly, by requiring owners to use their property in the “national interest”—that is, as the autocratic authority conceived it. (Nevertheless, a few industries were operated by the state.) Where socialism abolished all market relations outright, fascism left the appearance of market relations while planning all economic activities. Where socialism abolished money and prices, fascism controlled the monetary system and set all prices and wages politically. In doing all this, fascism denatured the marketplace.

Let's see....we've got a Department Of Energy jacking around with fuel prices.  Jeff Immelt of G.E. is whispering sweet nothings into Obama's ear while he outlaws bulbs he doesn't like and mandates the ones G.E. can make overseas.  Washington will soon be in charge of healthcare.  It appears that Monsanto has written more laws than any senator who ever lived, trying to control the freakin' food supply.  And on and on and on.....

I'm glad that Obama hasn't noticed my employer's fruitstand industry and its risky, unfettered, unregulated, free-wheeling....oh, wait.....now I'm hearing rumors that our Lords And Masters might declare that all produce has to be refrigerated.

We better get on board. 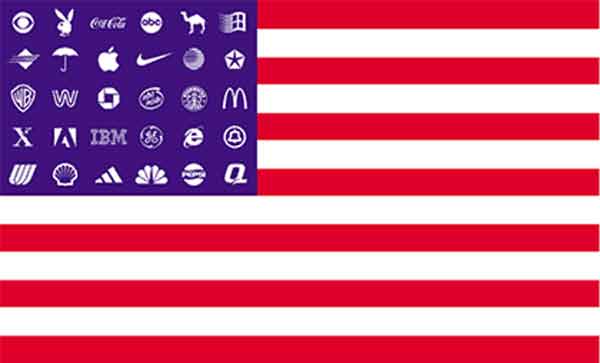 Posted by The Whited Sepulchre at 7:40 AM

I had to stop helping my wife study for her citizenship exam. All of the USCIS study guide answers were wrong.

Interesting question. FWIW, I think it's more a philosophical question than an economic one. We have an admittedly confusing and inconsistent system. On one hand, the government does its best to control the monetary system and private production, yet the government is still susceptible to influence from the private sector.

On the other hand, there is still enough 'freedom' (gaps? oversights?) in the system to allow entrepreneurs to succeed (or fail). Your firm is an example, as is Apple, Microsoft, Facebook, Google, Nike, Gatorade, and many others.

On the third hand(!) when those once-small startups become market leaders they do everything they can to stifle new competition.

I'm not sure what the hell to call that...

"What is the economic system in the United States? I'll admit it. I'm confused."

You are generally free to operate a business and keep most of your income, HOWEVER, you have to pay "protection" money to a variety of thugs.

Now, the competitive environment is the tricky part: Kleptocracy.

Every person you meet in commerce is out to empty your wallet of as much as they can get. They will lie, cheat, steal, or sue in order to get it.

Most of the kleptocrats will rationalize what they do - "Oh, he really did need a new O2 sensor in his car because the test was slightly out of the NADA guidelines, and we will charge him for the 1.5 hours shown in the NADA guide to replace it even though it took us only 20 minutes. 1.5 hours is the AVERAGE, and if we don't charge him more, we will get screwed on the 2 hour jobs."

Industry standards, traditional rates and practices, prevailing wages, etc. are all designed to RIP YOU OFF.

But never fear because YOU rip people off too. The only way you become prosperous is by stealing more than gets stolen from you.

People who are slick, savvy, good looking, or persuasive get ahead. Their value added is the amount of consumer surplus they can steal from you. But their boss is ripping them off too.

So the most honest thieves in America are the guys shaking cups on the street corner. They ask for your money, offer you nothing in return, but they don't promise you anything and you expect nothing from them.

Backhand,
Where do your quotes end in that Google search?

"Where do your quotes end in that Google search?"

You can't get that and you want to know what the economic system is in the United States? Don't bother, a dog has a better chance of knowing how a doorknob works. Start small, maybe shoelaces. Fisher-Price sells a lot of teaching materials you will find educational.

Speaking of gratitude, how is your trust fund holding up?