Ok, most every libertarian I've ever met believes that government intervention in the economy is a bad thing.  It gives bureaucrats and donation-seekers a chance to pick winners and losers.

Here's the Coyote Blog's take on the situation:


I have written before about government corporate subsidies and attempts at venture capital investment in the context of the “big shot” effect.  Many times I have come to suspect the biggest beneficiary of these programs is to the administrators themselves, who have no money of their own and wouldn’t ever be trusted to manage a private portfolio but get to act as “big shots” with other peoples’ money.  They get the psychic benefit of being little junior Donald Trumps.

Every libertarian I've ever met believes that giving subsidies, quotas, tax breaks and (ahem) "incentives" to some segments of the economy is a bad thing.  It gives bureaucrats and politicians a chance to pick winners and losers, reward friends and punish enemies.

Every libertarian I've ever met also believes that a huge chunk of government activity should be left to the private sector or non-profits.  (Exceptions would be for activities requiring the use of force.)

Most libertarians delight in pointing out how government screws up just about everything it touches.  (Exception granted for the military.  If you want to go overseas and blow up brown people, our forces are the best.)

I'm as lazy as the next person.  But if I were to go work for the government, I'd want to control the distribution of the pork, the shoveling of the slop, and the gathering of the graft.

The great state of Arizona has admitted that it can't even do that.

Arizona has outsourced its corruption.  They've created a public/private "partnership" called the Arizona Commerce Authority to  hand out special priviliges, pork, and tax breaks.  I don't care who you are, what political label you wear, or even if you think tax breaks for donors are a good thing.  I don't care.  Because...This....Is....Funny !!

They've admitted they can't even dish out pork and patronage effectively.  Hell, what would the Daleys of Chicago think of this?

Go here to read more at the Privatization Blog.

Go here for the Coyote Blog's take on it.

Then turn your ears toward Phoenix and listen for the sound of the scoops rattling around inside the slop buckets.  Come and get it !!! 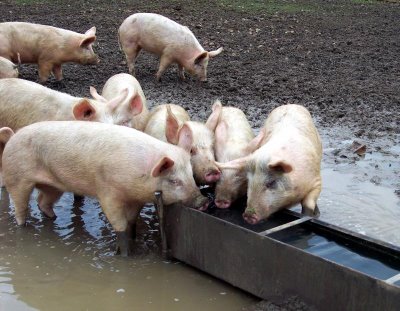 Posted by The Whited Sepulchre at 1:07 PM