Your stimulus dollars at work

I found this link on Instapundit.
It's from The Charleston Gazette.

Nobody told Elliot how much the router cost or who paid for it. Workers just showed up and installed the device. They left behind no instructions, no user manual.

"I don't know much about those kinds of things," Elliot said last week, before politely leaving to help an elderly patron select books. "I just work here."

The state of West Virginia is using $24 million in federal economic stimulus money to put high-powered Internet computer routers in small libraries, elementary schools and health clinics, even though the pricey equipment is designed to serve major research universities, medical centers and large corporations, a Gazette-Mail investigation has found.

The Cisco 3945 series routers, which cost $22,600 each, are built to serve "tens of thousands" of users or device connections, according to a Cisco sales agent. The routers are designed to serve a minimum of 500 users.

Yet state broadband project officials directed the installation of the stimulus-funded Cisco routers in West Virginia schools with fewer than a dozen computers and libraries that have only a single terminal for patrons.

Hit the links to read the whole thing.  I don't know what company made these routers, but I bet I can tell you which presidential candidate they support. 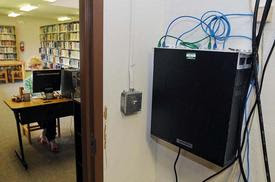 Ok, see that little button to the right of the page, the one that says "Assorted Deceptions For A Gullible Public"?
That's a link to the Stimulus Package website.  You can go there to see how the Porkulus dollars have been spent in your neighborhood.  How many jobs were "created".  (Intentional scorn quotes.)  What they cost.

Guess what I'm doing in my free time?  I'm contacting those organizations and business closest to my home and my warehouses and doing some interviews and having some conversations.  I suggest you do the same.

Joe Biden is in charge of making sure that none of this money is wasted, BTW.  Here's Obama rolling out the Porkulus Plan to Congress and the nation. It's only 37 seconds. Play it. Play it loud. Somebody in West Virginia has been seriously messin' with Joe:

“You compare the nation to a parched piece of land and the tax to a life-giving rain. So be it. But you should also ask yourself where this rain comes from, and whether it is not precisely the tax that draws the moisture from the soil and dries it up. You should also ask yourself further whether the soil receives more of this precious water from the rain than it loses by the evaporation?” - Frederic Bastiat

Charleston West Virginia had some serious losses due to evaporation.
Posted by The Whited Sepulchre at 1:20 PM