An open letter from Lee Wrights

I wasn't able to make it to the Libertarian Party's National Convention in Vegas.
My friend Lee Wrights was one of several LP nominees for President Of These United States Of America.

As I understand it, the delegate votes worked it down to Wrights and former New Mexico Governor Gary Johnson.
At that point, there was a debate.  Here's Reason magazine:

Las Vegas—The final debate in the race for the Libertarian Party presidential nomination between Gary Johnson and Lee Wrights was, mostly, a friendly affair that felt more like an infomercial for libertarianism than a debate. Former LP presidential candidate David Bergland softly tossed questions to the candidates that seemed as if they were designed to elicit responses that would convert those watching on C-SPAN to libertarianism rather than display the differences, however slight, between the two candidates. At times it was even tedious, though as Johnson would say later in the debate, you almost always know how a Libertarian will come down on an issue. Even though we live in an era where libertarianism is more popular and widespread than ever there are still people out there that have no idea what it is about, so there is the need, in the LP’s eyes, to appeal to the casual viewer.


Early questions like, “How you found the Libertarian Party” and “What is Libertarianism?” reinforced the infomercial feel but they did get some great responses.

Johnson said he became a libertarian after somebody gave him a book in 1971 about libertarianism. His worldview was forever changed and he passed the book on in the hopes of changing the mind of somebody else.

“For eight years I got to serve as a Libertarian governor under the guise of being a Republican. I have come out of the closet,” he said.

Wrights tried to connect his libertarianism with the delegates on a more personal level.

As the debate wore on it became clear that Johnson was taking the debate very seriously and thinking about the long term while Wrights played the role of convention jester. Johnson has stated numerous times during his run that he is committed to the Libertarian Party and, assuming he loses in 2012, running again in 2016 on the LP line. Wrights has been running since 2010 and tomorrow could potentially be the end of his presidential aspirations, meaning that he has nothing left to lose.

Hit the Reason magazine link to read the whole thing.  Good stuff, as usual.
Here's what Lee wrote on his website yesterday, thanking his supporters after the Johnson victory, marveling at our ability to go at each other politely but aggressively, and still congratulate each other afterwards on a good game well-played....
I think I would sell myself into slavery for one year if it would guarantee that Lee Wrights or Gary Johnson would be a guaranteed participant in the debates with the Obamneys.


When I started my campaign for the nomination I said that I was determined to ensure that whatever else happened the Libertarian Party would talk about war during the 2012 national convention. We did that. Every American who watched the presidential candidates debate or the convention proceedings on CSPAN heard that message loud and clear - stop all war.

They also were treated to a fine example of how political discourse should be conducted in America. During the debate, they didn’t witness the spectacle of two men going after each other, out for blood and tearing each other apart. They saw two rational and reasonable people discussing alternative ways that liberty and freedom can bring peace and prosperity to our nation. 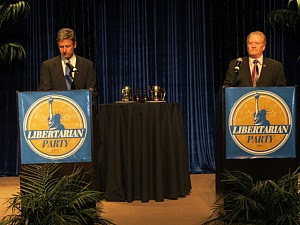 Yes, there were contentious debates and votes — several votes - over electing members of the national committee. But no blows were struck, no blood was spilled, and no one stormed out of the room. We resolved our differences peacefully and nominated candidates for President and Vice President every Libertarian can and should support.

Even after taking off a week to rest and recuperated in Vegas, I’m still at a loss for words to express how grateful I am to the members of my staff, all the volunteers who worked so hard on this campaign, the donors and supporters who made this campaign possible - and my family, the Libertarian Party. I could not have done anything without your hard work, dedication, and perseverance.

I would thank you all from the bottom of my heart … but for you, my heart has no bottom.

Lee Wrights is a great, great man.  I'm gonna work on getting him to appear at the Tarrant LP Speaker Series.  Good stuff, good stuff.
Posted by The Whited Sepulchre at 8:01 AM