Because of Hurricane Sandy, many New Yorkers and New Jerseyites are having to wait in long, long lines for gasoline. 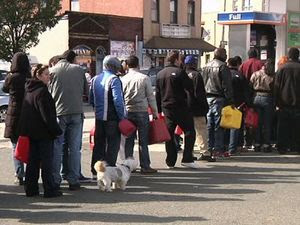 If your license plate has an odd number, you can only purchase gasoline on odd numbered calendar days.  Ditto for even.  Anyone thinking about this for more than two minutes can see that it's nothing but "Performance Art" from government.  Demand is demand, regardless of which arbitrary day the demand is called for.  People with time to do so are waiting in line to buy gas whether they really need it or not.  Sheesh....

Here's the biggest obstacle.  New York and New Jersey both have "anti-gouging" laws.  If there's a disaster of some sort, merchants can only increase prices by 10%, unless they can prove that an even higher markup is required to turn a minimal profit.  That should make it more fair for everyone, right?

But because of infrastructure problems, there's not enough fuel coming into New York and New Jersey.  The world that those old prices were based upon doesn't exist any more.  Every load of dinosaur juice coming into NY/NJ is worth 3 times its former value.  People are purchasing tanks of gas that they don't need, siphoning it from their cars into 5-gallon cans, and selling it for 3-4 times what they paid for it (which is exactly what its worth, BTW.)   They're illegally selling generators on Craigslist.  This Republican idiot is hauling 65 New Jersey business owners into court for "price gouging" - i.e., selling things for what they're worth.

So how is the government determining the best use for this fuel?  Odd day/Even day purchasing.

According to Russ Roberts' book "The Price Of Everything", here's the best way to restore fuel supplies to NY/NJ.

Let merchants sell gasoline for whatever price they want.  If you really need gasoline, you'll buy it.  If you just wanted gasoline for running out for lunch or road trips, or because you're paranoid, you won't buy it.  This is the only reason that Texans and Floridians and Californians have gasoline today.  The price is allowed to fluctuate, all day every day, based on demand.

Bullshit.  This is why you can buy lettuce in the wintertime.  It's why there are always shoes for sale at the mall, and you don't have to wait in line for them the way they did in Commie Eastern Europe.  It's why the U.S. has a higher standard of living than Cuba.  Companies are waiting in line to sell us lettuce and shoes, at whatever price we're willing to pay, and not vice-versa.

But how would this help lower fuel prices???

Someone might make a fortune selling gasoline for $20.00 per gallon for a few days.  If other gas stations see this guy cleaning up on gasoline, they will move heaven and earth to re-open their stores.  They'll risk life and limb to serve you.   A couple of days later, gasoline would probably be selling for $16.00 per gallon.  More and more businesses would want in on it.  Gasoline would drop to $12.00 per gallon.  And on and on, until there were enough people selling gasoline to get it down to the ridiculously high prices that NY/NJ residents were already willing to pay before the hurricane.  Competition doesn't cure everything, but it's way ahead of whatever solution is in 2nd place.

But how much hassle would YOU go through to sell gasoline today, in NY/NJ for only 10% more than it sold for before the hurricane?

You might just stay home and watch "Dancing With The Stars" and wait on someone else to clean up the mess.  (That's what's going on now, BTW.)

Here's something from an old post I wrote about Russ Roberts' "The Price Of Everything".  The book deals with a Big Box store that was marking up generators and flashlights after an emergency, BTW.


Do you want to know how to ensure that more people will die during a famine? Legislate artificially low prices. Want to keep people from delivering water to drought stricken areas? Put anti-gouging laws into place.

Do you ever wonder why we can simply go out and buy our basic necessities?

It's because our (somewhat) Free Market Economy allows prices to go up when there's a shortage, and decline when there's a glut. We don't have an idiotic Flashlight Czar (yet), setting flashlight prices all over the country based on hours of darkness, hurricanes, or electrical problems. People can charge whatever they want to for flashlights. Therefore, when you really, really need see in the dark, somebody out there is probably willing to sell you a flashlight.

Yeah, Chris Christie can put anti-gouging laws into place, and this will help guarantee that merchants won't be able to rip off people who want to purchase a generator.  It also guarantees that there won't be any generators on the shelves.

Which store selling power generators would you want to shop in?  The one that has 'em, or the one that doesn't?
Posted by The Whited Sepulchre at 7:44 AM

Not brilliant.
Anyone thinking about it for longer than 5 minutes will say that it's all "obvious".

Take the compliment. I agree the argument is fairly obvious, but you writing is excellent.