We don't talk much anymore.
I acknowledge that I'm a sinner.
Except for Christmas and some Youth Sundays, I haven't made it to church in about three years.

I've said horrible, horrible things about three of my Brothers In Christ, George W. Bush and Barack Obama and Mitt Romney.  Perhaps I've made Gary Johnson into a false idol.

But I've worked really hard to get our children and grandchildren some relief from their parents' and grandparents' ridiculous government debts.  I've worked hard for gay marriage.  I've led discussion forums about the right of self-defense and gun rights and the 2nd amendment.  I've advocated the complete and utter destruction of Ben Bernanke's government money printing press on Blue Mound Road, mostly because inflation hurts poor people so much.

I've even tried to be Moses.  I've taken a look at the number of black men that Barack Obama keeps in steel cages for marijuana offenses, and I've said "BARACK OBAMA!!!  YOU HYPOCRITICAL POT-SMOKING S.O.B. !!  LET YOUR PEOPLE GO !!"

I recently acted as preacher/priest/rabbi in a secular wedding.  I bet you were proud.

Balance all that Libertarian Goodness against my continued violations of almost every known commandment, and it probably comes up even.  That's the only reason I'm coming to you, asking just one little favor.

This website (do you have to hit links if you're God?) says that Jeb Bush, who is George W.'s brother and GHW Bush's son, will probably be the Republican nominee for President in 2016.

This website says that She Whose Name Is Not Spoken will probably be the Democrat nominee for President in 2016.

If voters are given the choice between Gary Johnson and the princelings from a couple of entitled hereditary monarchies, life will be almost too good for words.  Gary Johnson vs. Bill Clinton's wife vs. George Bush's brother.  Can you imagine those two royal families arguing that a commoner should be excluded from the presidential debates???

In spite of today being Saturday, the Jewish Sabbath, I'm going to go to work.  Please don't hold that against me. 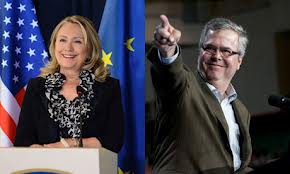 Posted by The Whited Sepulchre at 8:45 AM

I've asked this before I think, but is there any fuck up so awful that you won't come running back to the Republicans faster than a homeless battered wife?

Not calling you a battered wife of course. They still have a tiny amount of self respect left.

IB,
I haven't voted for a Republican in years.
What the heck are you talking about? You're making even less sense than usual.
It's the Republicans who keep coming back to the voters, promising that they've changed, that they won't spend as much, etc etc etc.
BTW, are you ever going to give Don Boudreaux's Econ class another chance?