Ungrateful 70-Year-Olds Who Don't Appreciate The Blessings Of Socialism 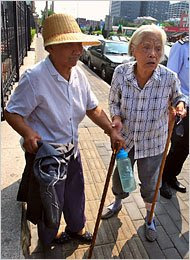 Here's the New York Times:
BEIJING — In the annals of people who have struggled against Communist Party rule, Wu Dianyuan and Wang Xiuying are unlikely to merit even a footnote.
by Ng Han Guan/Associated Press

The two women, both in their late 70s, have never spoken out against China’s authoritarian government. Both walk with the help of a cane, and Ms. Wang is blind in one eye. Their grievance, receiving insufficient compensation when their homes were seized for redevelopment, is perhaps the most common complaint among Chinese displaced during the country’s long streak of fast economic growth.
Those weren't their homes. The land and everything on it belonged to the state. That's one of the blessings of Socialism. It makes it easier to achieve the greater good.
But the Beijing police still sentenced the two women to an extrajudicial term of “re-education through labor” this week for applying to hold a legal protest in a designated area in Beijing, where officials promised that Chinese could hold demonstrations during the Olympic Games.
They became the most recent examples of people punished for submitting applications to protest. A few would-be demonstrators have simply disappeared, at least for the duration of the Games, squelching already diminished hopes that the influx of foreigners and the prestige of holding the Games would push China’s leaders to relax their tight grip on political expression.
But, but, but....why? When socialism is so pure and wholesome?
Posted by The Whited Sepulchre at 10:17 PM

The sad part is I don't trust our media any more than I trust the Chinese government. In fact, I don't know that I trust our government much more.

How do we know this story is true?

Hey, it wouldn't be on the Internet if it weren't true.