Former terrorist William Ayers is finally getting some attention from The Daddy Party (also known as The Republicans).


I wondered at great length in a previous post about when this was going to happen. (Actually, I've been wondering if a Republican campaign against Barack Obama would ever happen....) Here's some analysis of the video from a great site called "The Campaign Diaries", a site that's worth bookmarking if you're a political junkie.

The ad’s goal could not be more explicit, and this is the clearest attempt yet to define Obama as a Manchurian Candidate. It strokes voters’ perception of Obama as a mystery that is simply too dangerous to go for, a mystery so huge that Obama could in fact be an anarchist terrorist looking to get in power to bomb to destroy the Capitol. (The moderators of the ABC debate in April had already raised the Ayers connection.) The Washington Post fact-checking division provides some details as to the Obama-Ayers relationship, which it describes as a “tenuous” one. 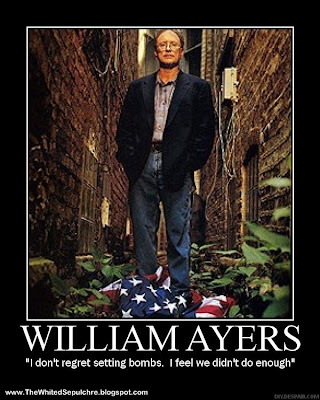 As of today, I wouldn't trust the Washington Post's fact-checking department to review the orders at the McDonald's drive-through in Yazoo City, Mississippi. Their bias in favor of The Mommy Party (also known as the Democrats) has been established for a while, and then we get to this, an editorial is by John Kass, writing for the Chicago Tribune, about the adventures of journalist Stanley Kurtz and his efforts to review various documents related to the "tenuous" Obama/Ayers relationship:

....Kurtz's research was to be done in a special library run by the University of Illinois at Chicago. The library has 132 boxes full of documents pertaining to the Chicago Annenberg Challenge, a foundation vested heavily in school reform. Kurtz believes the documents may show Obama and Ayers were close—far closer than Obama has acknowledged—over oodles of foundation gifts on education projects the two worked on together.

But by the time Kurtz landed in Chicago, the librarians changed their minds. The donor of the documents hadn't cleared his research.

Perhaps they'll let him look at the documents on Nov. 5.

The relationship between the ambitious Obama and the unrepentant Ayers is a subject that excites Republicans, who haven't really thwacked that pinata as hard as they might.

It really irritates Obama and his political champion, Chicago's sovereign lord, Mayor Richard M. Daley. "This is a public entity," Kurtz told us Wednesday. "I don't understand how confidentiality of the donor would be an issue."

Kass goes on to explain that if Mayor Daley doesn't want the review of the documents to happen, it ain't gonna happen.

But wouldn't it be fun to go through those boxes?

Here's the Kurtz article on his difficulties with gaining acces to The Ayers Archive. For the sake of future generations with time of their hands, I'm also copying the entire piece here.

Posted by The Whited Sepulchre at 7:14 PM