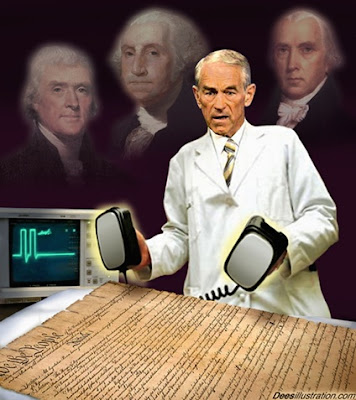 Here's the 4th installment of the Ron Paul Page-A-Day, in which I supply a section of Ron Paul's "The Revolution: A Manifesto" for your enlightenment and commentary, and to help sales of the best political book ever written.
In the previous installment, the good doctor explained why his campaign exceeded everyone's expectations (Hit the Ron Paul Page-A-Day tab below). In this excerpt, he gives a hat tip to one of his early role models.
Enjoy.

People seem to think I am speaking of principles foreign to the Republican tradition. But listen to the words of Robert A. Taft, who in the old days of the Republican Party was once its standard-bearer:

When I say liberty I do not simply mean what is referred to as "free enterprise". I mean liberty of the individual to think his own thoughts and live his own life as he desires to think and to live; the liberty of the family to decide how they wish to live, what they want to eat for breakfast and for dinner, and how they wish to spend their time; liberty of a man to develop his ideas and get other people to teach those ideas, if he can convince them that they have some value to the world; liberty of every local community to decide how its children shall be educated, how its local services shall be run, and who is local leaders shall be; liberty of a man to choose his own occupation; and liberty of a man to run his own business as he thinks it ought to be run, as long as he does not interfere with the right of other people to do the same thing.

As we'll see in a later chapter, Taft was also an opponent of needless wars and of unconstitutional presidential war-making.

This is the Republican tradition to which I belong.

Picture of Dr. Paul jump-starting the Constitution came from here.
Posted by The Whited Sepulchre at 9:33 PM

Check out this new Christian band that just released their first album. From what I heard on the samples site, they sound really good.