How To End An Ice Age? Sin 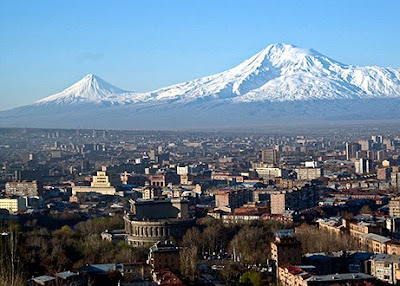 Let's discuss what caused this flood. Please pick the cause you think most likely.
a) Sin
b) Climate cycles caused by natural fluctuations in the environment, the earth's core, sunspots, and other natural causes.
c) Adam and Eve's insistence on driving a Hummer, plus Cain and Abel's arrogant refusal to recycle.
d) Fred Flintstone and Barney Rubble had a massive carbon footprint, but didn't have a cap-and-trade system.
e) Al Gore had not yet been born.
f) We don't have a freakin' clue.
Regardless of what you think about the cause of the glaciers melting 9,400 years ago, people found a way to blame themselves or other people for the resulting flood. (Genesis 6:11 Now the earth was corrupt in God's sight and was full of violence. God saw how corrupt the earth had become, for all the people on earth had corrupted their ways. So God said to Noah, "I am going to put an end to all people, for the earth is filled with violence because of them." etc etc etc....)
We like to believe that the universe is all about us, whether it's a comet in the night sky (omens), the location of planets influencing our luck (astrology), or the earth getting warmer or cooler and causing floods or ice ages (religious flood stories, or the cult of anthropogenic global warming).
The reality? We really wish that the weather was all about us.
Posted by The Whited Sepulchre at 2:10 AM

I always had a lot of problems with the noah story, beside the obvious difficulties of every animal/insect on earth making the journey to where the ark was being built (did the penguins start their swim years earlier? How did the bison swim the ocean to asia?) and the ark-size issue, there was the people issue.

Given all the assumptions, I find it incredulous that over the entire earth at that time there was not one single person worth saving. Not one. None of the preachers in the far-off churches, not any housewives (tentwives?) in Mongolia, none of the indians in North America, nobody. There were not any in the "not doing well but can be saved if they turn their lives around" category, nope. Every single person on the face of the planet has to die.

Speaking of which - since mankind can't evolve, how did people of other colors appear if only noah and his family (presumably white) were left?

I thought the sea level was supposed to decrease when Obama was elected... That's what he said, right?