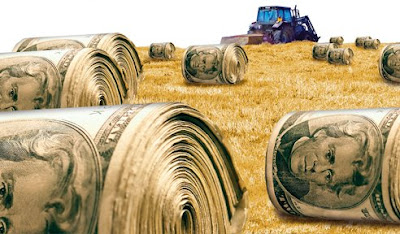 Speaking of what happens when government decides which industries and individuals to smile upon....

WASHINGTON — Among the audacious proposals in President Obama’s budget was a plan to save more than $9.7 billion over a decade by putting strict limits on farm subsidies that are disbursed regardless of market conditions or even whether the land is actively farmed.

But Mr. Obama’s grand ambitions have run into political reality.

The budget outlines approved by the House and Senate on Thursday night do not include limits on farm subsidies at all, and even champions of change say that if the president’s plan can be revived, it will have to be scaled back so significantly that the savings could amount to just several hundred million dollars.

I'd wondered how the Hopey/Changey people would do against the Farm Lobby. Oh well.
Picture of subsidy farm from here.
Posted by The Whited Sepulchre at 10:30 PM