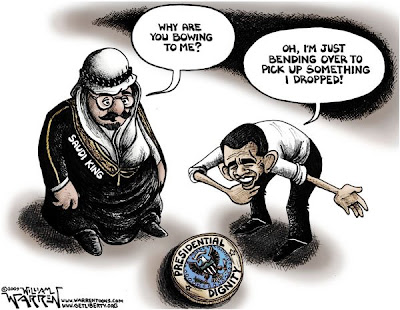 Posted by The Whited Sepulchre at 12:47 AM

I need to apologize for these anti-bowing posts, and I'll delete them if necessary.

The White House is now claiming that the bow was a misunderstanding. President Obama merely confused King Abdullah with the head of the Teachers' Union.

You know I love you man.

But this whole "bowing" business makes you come off like Sean Hannity. What happens is it allows people to write off your other (perhaps more insightful) stuff as partisan bullshit.

Bitch about everything and nothing gets heard.

Our Commander In Chief has no earthly idea what he's doing, and like most of his co-workers in government, I wish he'd stayed home.

We just survived 8 years of G. W. Bush and you say Obama doesn't know what he's doing -- and you make this assessment after barely 90 days?

By the way, I read a little of Gus's blog. I'm curious as to why you'd think I'd automatically consider yet another Ayn Rand groupie any kind of voice of authority?

Gus does say Libertarians are "hardly a friend of liberty, given that their lack of a coherent philosophical approach makes them unable even to define the term."

That's between you and him. Go get'em, tiger.

Doctor,
You are dead on correct about my opinion of Obama's effectiveness.

What we need in the Oval Office is someone who will simply do LESS, in hopes that the harm done by government is minimized.

I'm glad you looked through the GVH site. He's a Randian Objectivist who raises questions and proposes arguments that I simply can't counter. (I still have a sentimental attachment to the idea that government is probably the best organization to deal with roads, enforcement of contracts, etc.) Mr. Van Horn takes it to a whole new level where I'm not yet prepared to go. (And it's also hard to argue with him about the effectiveness of Barack Obama.)

WS - oh, I didn't forget you had no dog in this fight.

And based on his showing in the last election, few voters did either.

Bob Barr won a measly 0.4% of the popular vote in this last election.

I'd say in the Free Market of ideas the voter chose to say "no thanks" to the Libertarians.

So bitch away about Obama, oh dogless one, but like I said earlier, bitch about everything and nothing gets heard.

Doctor,
You are correct about Barr's potential effectiveness. But it all depends on the definition of being effective, doesn't it?

Obama is, honest to God, insisting that we spend our way out of debt. Believe me, I'll be letting everyone know how that works out.
(Which reminds me of a subject for possible future research.... Keynesians believe that govt can prime the economic pump by enacting spending/development projects. Did Keynes ever say anything about whether it would work with newly printed money?)

I hope that Barr would be in the Oval Office, sitting on his hands, licking whipped cream off strippers (Google it), and watching Wall Streeters jump off the 40th floor. Most of it would be cleared up by this time next year. (The economy, not the Wall Streeters.)

Instead, our children's children are going to have a diminished existence because we just can't say no.

Yet again we are going to have to agree to disagree, my honorable friend.

There are those who hold that, yes indeed, priming the economic pump will lead to renewed growth, even if it means increasing debt (temporarily). Others disagree.

Thus far, there does not seem to be consensus on the issue.

If I find fault it is because you are (by my lights) representing opinions as facts. While your favored economic gurus may be of one opinion, it is not an opinion universally held.

Too much certainty without any possibility of doubt makes me instantly suspicious, whether in economics, politics or religion.