Lord Oxburgh wants to be the J.R. Ewing of carbon capture

Lord Oxburgh, the climate science peer, ‘has a conflict of interest’

A member of the House of Lords appointed to investigate the veracity of climate science has close links to businesses that stand to make billions of pounds from low-carbon technology.


Lord Oxburgh is to chair a scientific assessment panel that will examine the published science of the Climatic Research Unit at the University of East Anglia.

The CRU has been accused of manipulating and suppressing data to overstate the dangers from climate change. Professor Phil Jones, its director, has stood down from his post while a separate inquiry, chaired by Sir Muir Russell, takes place into the leaking of e-mails sent by him and his colleagues.

Climate sceptics questioned whether Lord Oxburgh, chairman of the Carbon Capture and Storage Association and the wind energy company Falck Renewables, was truly independent because he led organisations that depended on climate change being seen as an urgent problem.

Andrew Montford, a climate-change sceptic who writes the widely-read Bishop Hill blog, said that Lord Oxburgh had a “direct financial interest in the outcome” of his inquiry.

Lord Oxburgh has said that he believes the need to tackle climate change will make capturing carbon from power plants “a worldwide industry of the same scale as the international oil industry today”.

A great case of hiring a fox to guard the henhouse.

Isn't it funny how so many of the people clamoring for immediate and decisive action on this non-crisis are the ones who stand to make millions from it?

Remember:  If Lord Oxtail can "tackle climate change" by forcing industry to purchase his voodoo machinery, he becomes the J.R. Ewing of carbon capture. 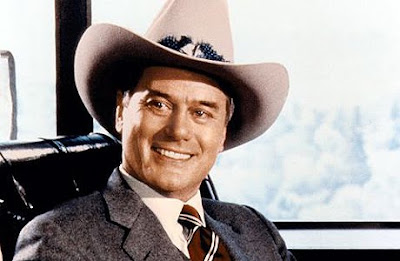 Picture of J.R. Ewing from the Dallas TV program came from here.
Posted by The Whited Sepulchre at 6:42 AM