Brent Budowsky of The Hill can barely contain himself, and for good reason.  You see, there is a chance that Barack Obama will nominate....Elizabeth! Warren !!  to something or another.

Within hours and possibly minutes I expect the president will name Elizabeth Warren to lead the new consumer protection agency, and if he does, the Democratic base will erupt and turn out to vote in far greater numbers than any current poll suggests.

Good God in heaven, how can you people even think of sleeping during a moment like this ????  Elizabeth ! Warren ! !

Think of it, folks !   Roust yourselves from your slumbers ! ! !  Elizabeth ! Warren !!,  the Leo Gottlieb Professor of Law at Harvard Law School -- where she teaches contract law, bankruptcy, and commercial law -- and has devoted much of the past three decades to studying the economics of middle class families ! ! !  I don't mean to cuss because my mama and my Aunt Gwen both read this website sometimes, but HOLY SHIT ! !   There is a chance that Obama is going to nominate Elizabeth !  Warren !!

If Obama names Warren, consumers would have the strongest possible friend fighting for them all day, every day, at a time of major consumer rip-offs and disastrous consumer confidence that would be lifted with the Warren selection.

Think of it....you're shopping for something, something like Dill Pickles.  You reach for a jar, but then you think "Am I about to get ripped off?  Am I confident enough, as a consumer, to buy these Pickles?  Do I have someone in my corner if this all goes terribly, horribly wrong?"
You almost put the jar back on the shelf.  But then you remember that Barack Obama has nominated, yea, verily, he has appointed Elizabeth ! Warren !! to the new consumer protection agency.  And she is there for you, Thanks Be To God.
What do you do next?  I mean, what do you do after you decide to vote, then revitalize the Democrat party, give hope to millions and preserve the Obama presidency?  What do you do next?  Do you even have to f***ing ask???
Why, you buy the damn pickles ! ! !
Elizabeth !  Warren ! !

If Obama names Warren, veterans and military families who have endured rip-offs and abuses would have the strongest possible friend with Elizabeth Warren.

If Obama names Warren, small business would have the strongest possible ally as she champions fair treatment by small business that has been a piñata being abused by large financial institutions.

That sentence is so screwed up, especially considering that it's from a major website.  I think Brent meant to say "of small business", and the phrase "that has been" is meant to describe the treatment, and not the businesses.
But who am I to pick grammatical nits at a time like this, at a time when our President, when our President, Mr. Barack H. Obama, when President Obama nominated Hillary R. Clinton as Secretary of State, well, he was just warming up and clearing his throat.
Hillary was nothing.
Elizabeth !  Warren  ! !  She might be willing to serve !  WE ARE NOT WORTHY ! !
And there are people on this earth who still claim that there is no God.

If Obama names Warren, the momentum in the campaign would shift powerfully and immediately, with a rejuvenated Democratic base excited and fighting trim, ready to roll, ready to fight, ready to erupt with support that the selection of Warren would inspire.

I apologize for that gap in the blog.  I just discovered that I had wet myself thinking of the possibilities, just dreaming of the Democratic base, rolling out of their Volvos and Priuses, ready to roll, ready to erupt and fight for Elizabeth !  Warren !!

Warren should be nominated through a recess appointment, not a nomination that would bring a unified Republican filibuster in the tired Kabuki dance that the American people, and the progressive base, have suffered from for far too long.

Absolutely F'ing-A Right you are, buddy !  Elizabeth deserves better than a Kabuki dance.  A coronation is in order.  Did people "vote" for Martin Luther King ?  Heck no.  How about Napoleon?  I don't think so.  Did directors make Richard Burton or Laurence Olivier "read" for roles in movies?  Hell no.  The roles were declared to be filled as soon as Burton or Olivier said they were willing to fill them.
Elizabeth Warren is the author of The Two-Income Trap: Why Middle-Class Mothers and Fathers Are Going Broke (Basic, 2003) (ISBN 0-465-09082-6).  Why would we even think of putting this to a vote?
Elizabeth !  Warren !!

The Democratic base is dispirited and tired, but the Warren nomination would rally them beyond the imagination of the most cynical pundits and politicians.

This campaign is in the ninth inning, the bases are loaded, and if the president hits the ball out of the park and names Elizabeth Warren....

I hate to point this out, but we've all seen our President in his Mom jeans on a baseball field.  The president does NOT come up to the plate when it's in the ninth inning and the bases are loaded.  Not when your pinch hitter is....
Elizabeth !  Warren !!

....it will be the single most powerful inflection point in many months, to the Democrats' advantage, and change the campaign of 2010 to a rousing fight to the finish that could well save the Democratic House of Representatives. 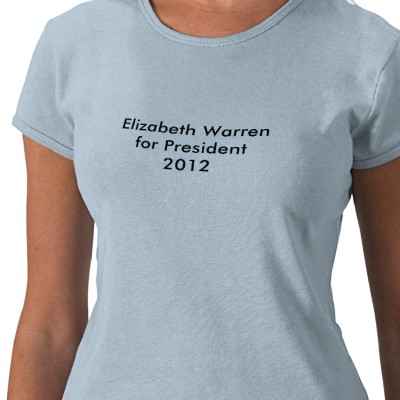 Congratulations to Brent Budowski! His post was nominated to the list of Top Ten Democratic Delusions Since Obama Was Elected.

What a hot babe!

I used a credit card to buy gas today. I felt safer already.

MW,
Glad to have you here.
Harper,
That's what everyone else in the world is saying about that guy's post. Read some of the comments on "The Hill" website. Everyone who knows him thinks that he's lost his mind.
NR,
I, too, have a warm fuzzy feeling knowing that a Warren nomination is a possibility. Am going to go ahead and buy dog food later today !

For your dog or for your family?

I'm trying to get used to the taste for my retirement years.

Nick -- I watched my 401k drop 2/3rds of its value in the last 6 months of the Bush administration.

I'm buying dog food too. And Dramamine for the next time the Wall Street wise guys get clever with their bookkeeping.