From The Wall Street Journal:

It's a tragedy that Milton Friedman—born 100 years ago on July 31—did not live long enough to combat the big-government ideas that have formed the core of Obamanomics. It's perhaps more tragic that our current president, who attended the University of Chicago where Friedman taught for decades, never fell under the influence of the world's greatest champion of the free market. Imagine how much better things would have turned out, for Mr. Obama and the country. 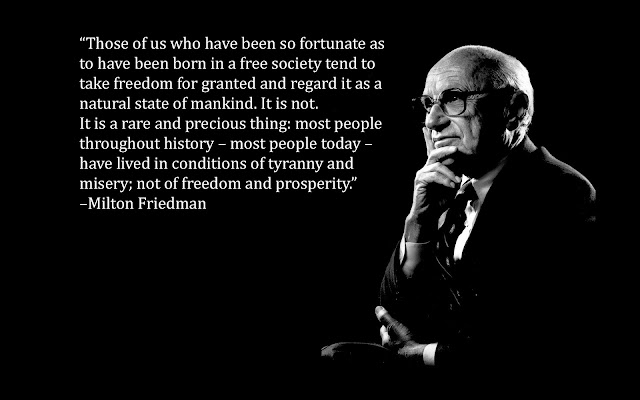 Friedman was a constant presence on these pages until his death in 2006 at age 94. If he could, he would surely be skewering today's $5 trillion expansion of spending and debt to create growth—and exposing the confederacy of economic dunces urging more of it.

In the 1960s, Friedman famously explained that "there's no such thing as a free lunch." If the government spends a dollar, that dollar has to come from producers and workers in the private economy. There is no magical "multiplier effect" by taking from productive Peter and giving to unproductive Paul. As obvious as that insight seems, it keeps being put to the test. Obamanomics may be the most expensive failed experiment in free-lunch economics in American history. 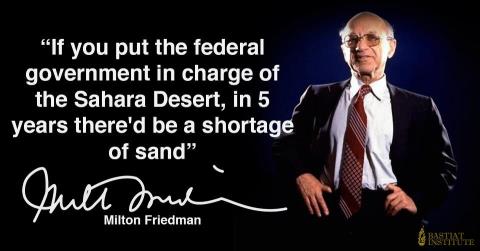 Equally illogical is the superstition that government can create prosperity by having Federal Reserve Chairman Ben Bernanke print more dollars. In the very short term, Friedman proved, excess money fools people with an illusion of prosperity. But the market quickly catches on, and there is no boost in output, just higher prices. 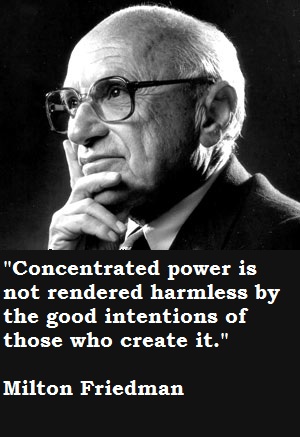 Next to Ronald Reagan, in the second half of the 20th century there was no more influential voice for economic freedom world-wide than Milton Friedman. Small in stature but a giant intellect, he was the economist who saved capitalism by dismembering the ideas of central planning when most of academia was mesmerized by the creed of government as savior.

Some words to remember from the middle of the article, on school choice, and why raising taxes on anybody is a bad idea:

The issue he devoted most of his later years to was school choice for all parents, and his Friedman Foundation for Educational Choice is dedicated to that cause. He used to lament that "we allow the market, consumer choice and competition to work in nearly every industry except for the one that may matter most: education."


As for congressional Republicans who are at risk of getting suckered into a tax-hike budget deal, they may want to remember another Milton Friedman adage: "Higher taxes never reduce the deficit. Governments spend whatever they take in and then whatever they can get away with."

Go here to read the whole thing.  Here are the closing paragraphs:

In a recent tribute to Friedman in the Journal of Economic Literature, Harvard's Andrei Shleifer describes 1980-2005 as "The Age of Milton Friedman," an era that "witnessed remarkable progress of mankind. As the world embraced free-market policies, living standards rose sharply while life expectancy, educational attainment, and democracy improved and absolute poverty declined."

Here's an idiotic stencil from the "Occupy Wall Street Folks" who don't quite understand that increased trade and freedom are good things: 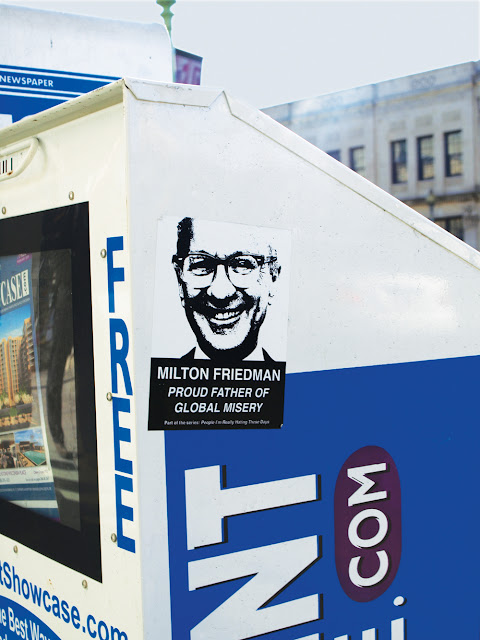 Well over 200 million were liberated from poverty thanks to the rediscovery of the free market. And now as the world teeters close to another recession, leaders need to urgently rediscover Friedman's ideas.

I remember asking Milton, a year or so before his death, during one of our semiannual dinners in downtown San Francisco: What can we do to make America more prosperous? "Three things," he replied instantly. "Promote free trade, school choice for all children, and cut government spending."

How much should we cut? "As much as possible." 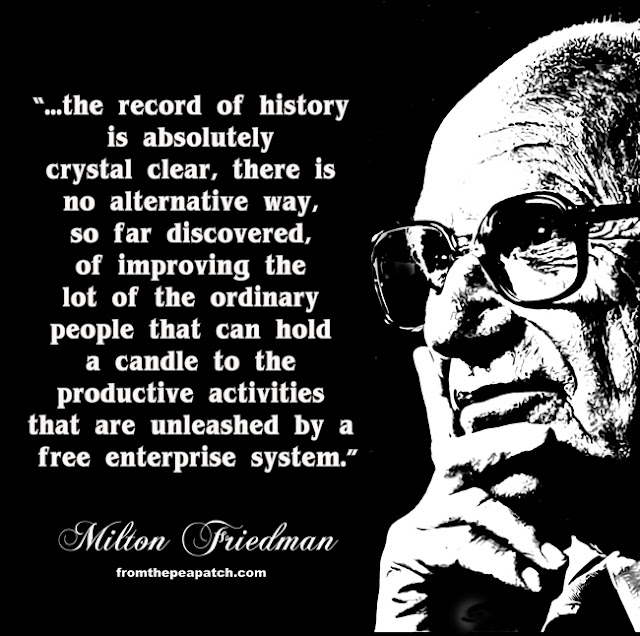 One other thing...Friedman was much criticized for advising some of the regime of Pinochet in Chile.  Protesters met him at the airport, etc.  (No one said anything about him advising China's murderous commie regime, since the Communists were thought to have pure intentions.)
I'm sending shipments to Chile and China in the next few weeks.  Since Friedman's consultations, these nations have gone from 3rd World Shitholes to prosperous places to live.  They can afford to purchase fruitstands made in the USA.  Chile now afford to purchase entire grocery stores worth of USA-manufactured displays.
North Korea and Cuba are not yet customers.  Come back, Milton!  We need you !!!
Posted by The Whited Sepulchre at 6:31 AM

I've read his books over the years, and he is right on some things, but he did saddle us with income tax withholding:

One of Friedman's most disastrous deeds was the important role he proudly played, during World War II in the Treasury Department, in foisting upon the suffering American public the system of the withholding tax. Before World War II, when income tax rates were far lower than now, there was no withholding system; everyone paid his annual bill in one lump sum, on March 15. It is obvious that under this system, the Internal Revenue Service could never hope to extract the entire annual sum, at current confiscatory rates, from the mass of the working population. The whole ghastly system would have happily broken down long before this. Only the Friedmanite withholding tax has permitted the government to use every employer as an unpaid tax collector, extracting the tax quietly and silently from each paycheck. In many ways, we have Milton Friedman to thank for the present monster Leviathan State in America.