The 1920's "roared" partly because Calvin Coolidge was president.
Calvin didn't get involved with much.  Stayed home a lot.
Didn't preach for anything but less government involvement.
Told the lobbyists for the first Farm Bill to shove it.
Supported Civil Rights for blacks and immigrants.
He cut taxes and spending to the point that by 1927, only the top two % of earners paid any income tax.  He slashed the national debt by 1/4.

That's really all he did to create one of the most prosperous times in U.S. history.

It was called "The Roaring Twenties".

If he'd been president at the beginning of the the stock market crash of '29, I suspect we wouldn't have seen a Great Depression. Calvin would've ignored it.

Whited's Law: A depression is a recession that the government tried to kill.

Where's Calvin now that we really need him? 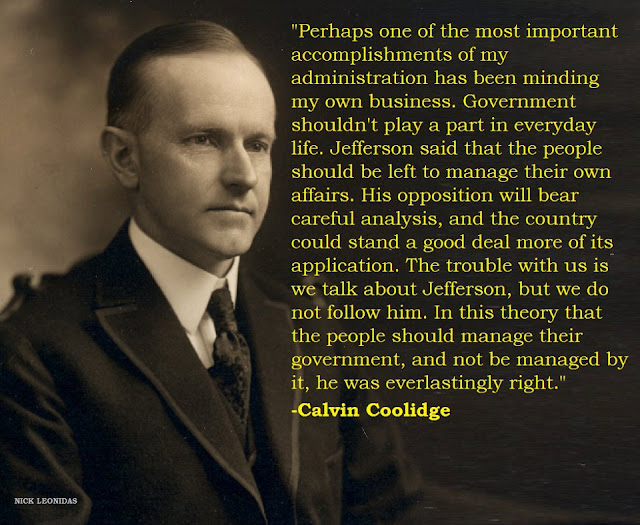 Posted by The Whited Sepulchre at 11:02 AM

Email ThisBlogThis!Share to TwitterShare to FacebookShare to Pinterest
Labels: cause and effect, heroes, presidents

There is plenty of evidence that faulty government action prolonged the Great Depression, but that's not really what started it.

When banks began to fail in large numbers, a third of the nation's money supply was wiped out. The collapse of the banking system is what caused the GD. According to Milton Friedman, the Fed's lack of action precipitated the GD, not its actions.

The Roaring 20's may have led to the Depression in the same way that the Housing Boom led to this recession. The Austrian theory is that the Fed's easy credit policies led to a bubble. Rothbard believed that money hoarding was beyond the Fed's control, but Hayek agreed with Friedman that deflationary policies of the Fed are what caused the hoarding.

And our friends Smoot and Hawley.