You Didn't Lift That

A nation whose citizens express proper gratitude to their leaders.


London, July 30(ANI): North Korean Olympian Om Yun Chol joined an elite list of weightlifters to have lifted three times their weight during the men's 56-kg, group B, clean and jerk weightlifting competition at the London Olympics, and he has credited his world-record feat to late North Korean leader Kim Jong Il.


Om won the gold medal in the process, and according to him, it was all thanks due to their late 'great leader'.

The 20-year-old Om, who stands just a shade under 5 feet, also set an Olympic record when he cleared 168 kilograms (about 370 pounds) in the clean and jerk in the men's 56-kilogram (about 123 pounds) category.

"How can any man possibly lift 168kg? I believe the great Kim Jong Il looked over me," CBS quoted Om, as saying. 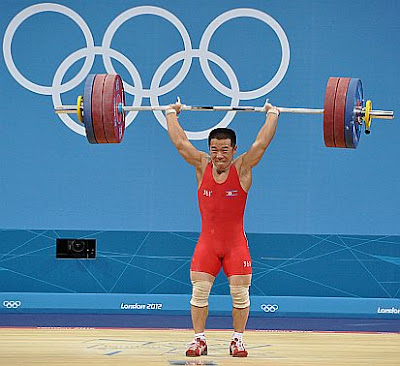 Let us all take a brief timeout from our daily tasks, go to a quiet place, and offer up prayers of gratitude to the Kims, Pol Pots, Bushes, Clintons, Reagans, Obamneys, Pelosis, Reids and Boehners who take our money away from us and then pay other people to do things for us with it.  For without them, we would have more choice in the matter.

Go here for the entire story about Om.
Go here for the theologian who first noted Om's proper attitude of reverence to The One who helped him lift 168 kilos.  His blog is called The Dignified Rant.  Via a link from Instapundit.
If you've been moved by Om's story, you can go here for information on how pay for even more government's spending.  (Bush/Obama spending, not North Korean spending).

Send your checks to this address:

Generally I don't read post on blogs, however I wish to say that this write-up very forced me to take a look at and do it! Your writing taste has been amazed me. Thanks, quite nice post.
lean manufacturing

Dearest Doyel,
I think I once talked to you on a 1-900 number. Even then, you very forced me to take a look at and do it! Your writing taste has been amazed me also.