How To Spot A Bad Argument

This is from Johann Hari, writing in "The Independent" :
As a rhetorical trick, it is simple. Anyone can do it, and we are all tempted sometimes. When you have lost an argument - when you can't justify your case, and it is crumbling in your hands - you snap back: "But what about x?"
You then raise a totally different subject, and try to get everybody to focus on it - hoping it will distract attention from your own deflated case. 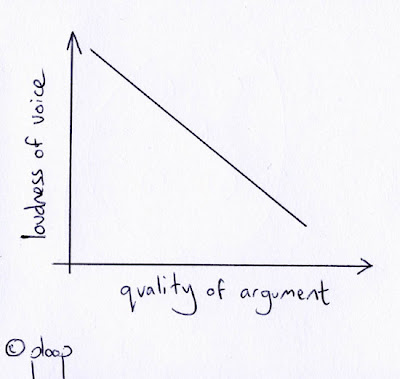 So whenever I report on, say, atrocities committed by Israel, I am bombarded with e-mails saying: "But what about the bad things done by Muslims? Why do you never talk about them?" Whenever I report on the atrocities committed by Islamists, I am bombarded with e-mails saying: "But what about Israel? Why do you never write about the terrible things they do?" And so it goes on, whatever the subject, in an endless international shifting of blame, united in the cry: "What about them! Talk about them instead!".....
The best way to respond to what-aboutery is to state a simple truth. Say it slowly: there can be more than one bad thing in the world. You can oppose American atrocities, and Chinese atrocities. You can be critical of Israel, and of Islamism. You can condemn Dubai's system of slavery, and the fact people are detained without trial in Britain. You can stand independent of governments - including your own - and criticize anyone who chooses to abuse human rights. The world is not divided into a Block of Light, and a Block of Darkness; you don't have to pick a tribe and defend its every action.
So whenever you hear the cry "But what about?!", you can reply: what about we ignore this crude attempt to change the subject, and focus on the subject in hand?
Graph of Bad Argument from here
Posted by The Whited Sepulchre at 9:11 AM

But what about when your opponent proposes to limit the scope of his argument in such a way that it ignores factors that ought to be considered?

Oh, by all means, bring those factors into the argument.

Excellent! You know, despite our occasional head butting, I respect your willingness to allow each of us to hang ourselves.

"And why beholdest thou the mote that is in thy brother's eye, but considerest not the beam that is in thine own eye?" Matthew 7:3.

But what about proportion?Sometimes people tell me about how terrible Guantanamo is, and I say yes it is, but if you were to lay all the lives destroyed out against the Laogai, which was the more significant? Which should we spend our finite time and attention on? Our outrage and our sympathy?

And they reply, "What's the Laogai?"

And that what's wrong with the media's argument.