Let's start with someone calling himself HydroKevin, at the Hydrogen Cars Now website, who has blessed us with this heartwarming story.

Eric Massa, a new Congressman from upstate New York is driving a Chevy Equinox Fuel Cell vehicle today from his home in Corning to Washington DC for the swearing-in ceremony. The Democratic Congressman is making the 282-mile trip to promote the creation of green energy jobs in the 29th district where the Equinox FCV is currently being produced (Honeoye Falls).
According to Massa, “Taking this GM electric fuel cell car to Washington reflects all that I will stand for as your representative - creating good jobs in western New York, breaking our addiction to foreign oil, taking meaningful steps toward addressing global warming, and getting our economy back on the road to success. I look forward to being sworn into office on Tuesday so we can get to work.”
Massa is a former Republican who decided to turn Democrat because of his opposition to the Iraq War. On Capitol Hill, Congressman Massa is also interested in gaining a position on the House Transportation Committee. (emphasis mine)
So far the journey is going well for the Congressman interested in promoting green energy. At least he learn a lesson from the Big 3 Automaker CEO’s and didn’t take a private corporate jet to Washington to talk about alternative fuels at the swearing-in ceremony.

But Radley Balko gave us this addition to the story in the latest issue of Reason magazine. Keep the giggles to yourself, please:

"The problem was that the distance between those two points is 280 miles, and the car's range tops out at 250.
So Massa drove one fuel cell car to Harrisburg, Pennsylvania, and had an SUV tow a second fuel cell car behind him. He then switched cars and continued to the nation's capital while the SUV towed the first car back to Corning. Once Massa arrived in Washington, D.C., in the second fuel cell car, a second SUV towed that car back to Corning.
In other words: To make a point about conservation and energy efficienty, Massa made the equivalent of three trips from Corning to D.C., two of them involving an SUV."

HydroKevin, please take note.....The point of the Green movement is to acquire Green government subsidies for your business. Nothing more. Please stop acting like it is for real. Please. It bothers those of us who know better. 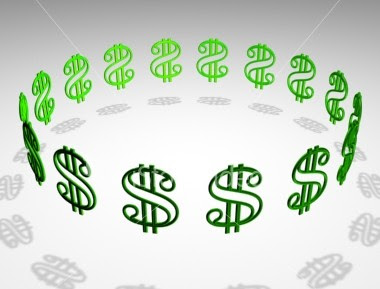 And I think those of us in the freight, shipping, and logistics industry should do whatever is necessary to get Eric Massa onto that House Transportation Committee. With thinking like that, business will boom. Fuel cell vehicle backhauls, anyone?

pic of the green dollars from here (worth reading, BTW)
Posted by The Whited Sepulchre at 9:17 PM

I went to the 'green dollars' link and the article was very good, but the link to the 'celebrities that bang their own green drum' story was broken. Or the LA Times just yanked it... Either way, I love to see Leo get his zero carbon footprint turned into size 15 carbon basketball sneakers in the light of scrutiny.

I laughed once when I heard Oprah say she cuts her water off between brushing and rinsing to save water. The same Oprah that lives here: http://santabarbarapocketlistings.com/wp-content/uploads/image/oprah-home.jpg
Maybe she shuts the fountain down between brushing and spitting too. Or perhaps she's reduced the potable water used with this: http://4.bp.blogspot.com/_PBGzvyx5MOw/RqLVlPsHWjI/AAAAAAAAAtQ/XUGzHFcZKbI/s1600-h/N54SL.jpg

I applaud people's ability to earn money and spend it as they please - just don't try to jerk us around with your tales of tiny carbon footprints! Sheesh.

It bothers me that you posted my first blog about Massa, but did not post the follow up blog, 2 days later in which I was critical of Massa.

Why not give your readers both sides of the story from the same source?

Everyone,
Please read the link immediately above.

It seems that Hydro Kevin also posted something about Massa using a plethora of support vehicles on his photo op to the Capitol.

Lunacy like the Massa stunt confirms my suspicions that this is an attempt to increase govt control in the name of greening the country.

Others see the same moronic incidents and remain unswayed.