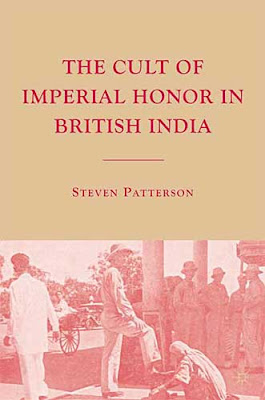 That isn't a picture of Barack Obama prostrating himself before the king of Saudi Arabia.
That's the cover of my little brother's book ! ! ! Now published by Palgrave MacMillan ! ! !

This is from the Amazon product description:

What was imperial honor and how did it sustain the British Raj? If “No man may harm me with impunity” was an ancient theme of the European aristocracy, British imperialists of almost all classes in India possessed a similar vision of themselves as overlords belonging to an honorable race, so that ideals of honor condoned and sanctified their rituals, connecting them with status, power, and authority. Honor, most broadly, legitimated imperial rule, since imperialists ostensibly kept India safe from outside threats. Yet at the individual level, honor kept the “white herd” together, providing the protocols and etiquette for the imperialist, who had to conform to the strict notions of proper and improper behavior in a society that was always obsessed with maintaining its dominance over India and Indians. Examining imperial society through the prism of honor therefore opens up a new methodology for the study of British India.

And here's an excerpt from one review:

“Patterson’s examination of masculinity and male codes of honor (racial, legal, and social) as a central element underpinning the British Raj ads significantly to scholarship on gender and imperial rule, as well as metropolitan Victorian and Edwardian British society. He eloquently unpacks the “white man’s burden,” showing how central maleness was to racial superiority, and how each was maintained through the specific norms and institutions of the Raj. His brisk prose delights as he marshals the latest theoretical and empirical literature, along with revealing an array of new sources for uncovering the interstices of whiteness and civility, honor and power, disclosing the micropolitics of force behind gentlemanly virtue.”

- Jonathan Judaken, author of Jean-Paul Sartre and the Jewish Question and editor of Naming Race, Naming Racisms, is Associate Professor of modern European cultural and intellectual history at the University of Memphis

Hit that "White Man's Burden" link to see my take on Kipling's poem.

Anyway, click here to read the first few pages of my brother's book. And if you EVER wake up in the middle of the night wondering about the morale of British troops stationed in India during WWI.... Dr. Steven Patterson is your man.

Elsewhere on these pages, I've posted the editorials of my little sister, Dr. Amy Cooper (hit the label below).

My little sister Jill doesn't have a doctorate, but she does have a nursing degree and a masters in speech/communications. Here is Jill's page on the website of the college where she teaches.

For a bunch of farm kids, we sure spend a lot of time typing.

Posted by The Whited Sepulchre at 4:41 PM

Very cool indeed! I wished I'd had an opportunity to meet said brother while he was in town. Sounds like my kind of guy.

Yeah, he's a Statist. But a great writer.

It’s so nice site. We love to see more on this site. Keep on updating… MonkAreRee Bali ***hgfyfyt