This is from Dr. Ron Paul's classic "The Revolution - A Manifesto"
Early on in my presidential campaign, people began describing my message and agenda as a "revolution." In a way, it is, albeit a peaceful one. In a country with a political debate as restricted as ours, it is revolutionary to ask whether we need troops in 130 countries and whether the noninterventionist foreign policy recommended by our Founding Fathers might not be better. It is revolutionary to ask whether the accumulation of more and more power in Washington has been good for us. It is revolutionary to ask fundamental questions about privacy, police-state measures, taxation, social policy, and countless other matters.
This revolution, though, is not altogether new. It is a peaceful continuation of the American Revolution and the principles of our Founding Fathers: liberty, self-government, the Constitution, and a noninterventionist foreign policy. That is what they taught us, and that is what we now defend.
I was never interested in writing a campaign book, as they tend to have (deservedly) short shelf lives. But the ideas I have been promoting, and which have struck such a powerful chord with so many Americans, are ideas that are overlooked and neglected because they do not fit into the template of trivial questions with which I opened this chapter. This book is an opportunity to highlight and explain them in the kind of systematic fashion that campaign speeches and presidential debates simply do not allow.
The revolution my supporters refer to will persist long after my retirement from politics. Here is my effort to give them a long-term manifesto based on ideas, and perhaps some short-term marching orders. 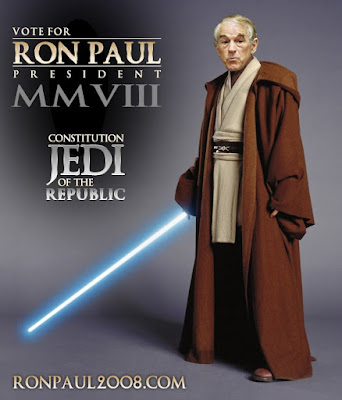 At the same time, I am also describing what the agenda of George W. Bush's successor should be if we want to move toward a free society once again. Our country is facing an unprecedented financial crisis precisely because the questions our political and media establishments allow us to ask are so narrow. Whether or not politicians actually want to hear them, it has never been more important for us to begin posing significant and fundamental questions. "In all affairs," Bertrand Russell once said, "it's a healthy thing now and then to hang a question mark on the things you have long taken for granted." I'm not in the habit of quoting Russell, but when in American history has his sentiment been more true?
I quote Russell fairly often. This gem in particular: "The most savage controversies are those about matters as to which there is no good evidence either way. Persecution is used in theology, not in arithmetic." -- Bertrand Russell, Unpopular Essays, "An Outline of Intellectual Rubbish"
But that's beside the point. You can purchase Ron Paul's "The Revolution: A Manifesto" for less than $14.00 by hitting the link above. Dr. Paul provides enough good evidence to push most political issues into the realm of arithmetic.
Picture of Ronnie-wan Kenobi from here.
Posted by The Whited Sepulchre at 10:03 PM