Does anyone know? Any of these three scenarios are disturbing.

Here are a few pics from yesterday's event. See the previous post for commentary. The crowd was larger than anyone expected. 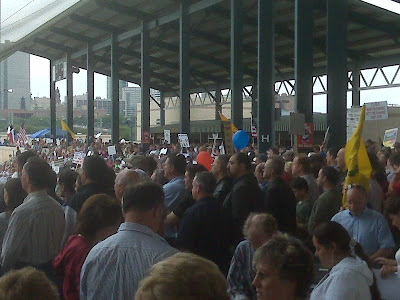 The effect of this poster is somewhat less than that of the real thing. Which two words jump out at you? 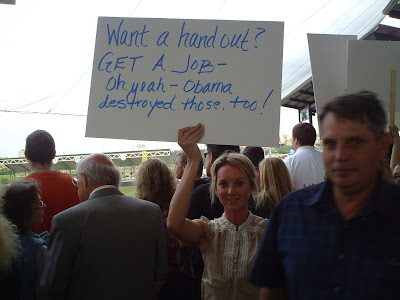 Funny. Accurate. And you can't start teaching 'em too young. 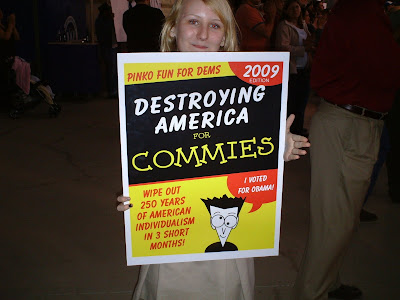 This is a low estimate. This girl's current debt is now in the low $40k level. If you look at the current unfunded future liabilities due to entitlements and projected deficits, her household owes $350k. And The Teleprompter Jesus says he's going to spend her way out of debt. 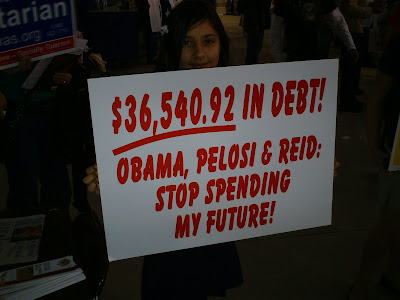 A favorite. And it's a nice poster, too. 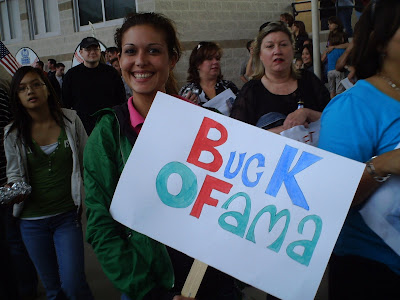 I'll add more to this post as soon as our governor, or a volunteer, or his employee stops spamming the likely sources.
Posted by The Whited Sepulchre at 9:30 PM

For a libertarian-oriented crowd, there were an abundance of good-looking women holding suggestive signs (whether they meant to be or not).

Oh - and a few dudes in Revolutionary War garb, tricorners and all.

TLG -- what? You've come out of the closet? Shocking.

With Gov. Rick "Blow Dry" Perry running around, Flickring, are you sure it was a Libertarian crowd? Sounds more like a bunch of sorehead Republicans to me. Even BrownCoat said that. Is it any wonder I have such a hard time telling the Libertarians and Republicans apart, despite all the rhetoric.

As to the ladies...I'm far too gallant to offer up an opinion, especially since I was working that day instead of teabagging.

But seriously. All these pictures are bashing the democrats and Obama.

A lot unfounded hate and no solutions. Where are the solutions that don't involve Bucking Ofama?

Where were these people when the Republicans launched their "grow the federal government at an unhindered rate" plan?

Doc and Gar pretty much summed up my feelings about the tea parties. I would gladly attend a Libertarian sponsored teabagging sans the idiot Republicans, Gubna Rick(now I'm being redundant), and the focus on Obama bashing.

Bashing the Obamessiah just makes everyone involved look like sore losers and waters down the message.

Doc, libertarians are easy to identify: we have equal disdain for The New Roman Empire Party(GOP) and The New Bolshevik Party(Dems).

Are you fed up with the way the mainstream media covered Tea Parties? Did your blood boil when you saw the degrading messages of CNN, NBC, and MSNBC? I mean it's completely ridiculous!

But you can do something about it! Send the mainstream media a message it will never forget, on Independence Day!

"Bashing the Obamessiah just makes everyone involved look like sore losers and waters down the message."

I respectfully disagree.
The Crips and Bloods, excuse me, the Republicans and Democrats portray their candidates as Messiahs who have the experience and judgement to sit at the top of all human activity and pull the correct levers to make everything run correctly.

This, of course, is bullshit.

No one can do the things that Obama pledged to do.

That's why his every failure, every stumble and stutter, needs to be magnified ten-fold. I'm proud to help with that effort. Otherwise, I'm partially to blame if the populace elects another savior.

Browncoat - I owe you two beers. Solving the problems we face as a nation is going to take more than ragging on Obama.

WS - while I respectfully disagree with your disagreement, I'll pop for your next beer too, as long as it's a Rahr (support local industry).

I'm european, and I really don't understand american health care system. Here we choose our doctor... you can change him every time. The difference is that we do not pay him for the single visit, but we pay him by taxes in a "forfait" based on our income.
I don't feel my self in a communist country, and I think that is good not to worry about money, when we speak of health...
I hope american will see how companies' interests will make you think public health care is a bad thing. Sorry for my english, and good luck.