A question about Octomom 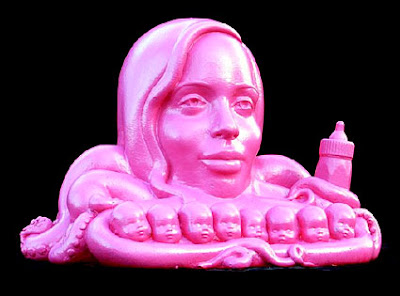 Nadya Suleman had six kids. Through in vitro fertilization she had eight more.
She was already on welfare, but there are lots of families on welfare.
Fourteen kids - a lot for one family, but there are hundreds of thousands of kids conceived every year by parents who are already on public assistance. We used to have an employee at our prototype shop who fathered four before he left High School, then spawned another six shortly afterwards. (He was a fellow ex-Mississippian, BTW. An extremely fertile one.)
Why has there been such an outrage over Octomom?
Picture of Octomom Art from here.
Posted by The Whited Sepulchre at 6:30 AM

Hmm let me count the ways.

I think the rancor escalates every time she opens her mouth. Nothing she says makes a lick of sense.

Is the photograph a picture of her uterus after wards?

It's the IVF thing. Nobody gets in the bun club "accidentally" via IVF. It's very deliberate. It also looks so much like a career.

Because the media told us about her. They don't cover all the others, especially all the males that participate in the conception of "multiple" children that they can't afford and who live off of our tax dollars.

Suzette: freakshows like the Octomom sell advertising -- doesn't matter whether it's on MSNBC, Fox Noise or your local affiliate. As long as people continue to watch this sort of shit, we'll continue to see it.

Say what you will about their politics, PBS's NewsHour doesn't sell ads, which is one reason stories like Octomom don't get much play there.

So far, these are the theories....