Driving You To Drink

Check this out, from a link provided by Jacob Sullum of Reason magazine:

These are the top contributors to the main group opposing marijuana legalization in California.

The #1 contributor is SA Recycling.  Guess what they recyle?
Metal cans.

#3 is someone named Diane Lake.  If the Diane Lake is the person whose contributions are shown here, she has given a ton of money to various Republicans and Barack Obama.  Not that there's any difference between the two on this issue.

Ms. Lake is followed by the Deputy Sheriffs and the Narcotics Agents, two groups who are concerned about job security (their own, not the people whose lives they destroy because of a victimless crime).

Here's Steve Fox, co-author of Marijuana Is Safer, on the surprising number of Bud Distributors (the drink, not the weed) opposing marijuana legalization:


Unless the beer distributors in California have suddenly developed a philosophical opposition to the use of intoxicating substances, the motivation behind this contribution is clear. Plain and simple, the alcohol industry is trying to kill the competition. They know that marijuana is less addictive, less toxic and less likely to be associated with violent behavior than alcohol. So they don't want adults to have the option of using marijuana legally instead of alcohol. Their mission is to drive people to drink. 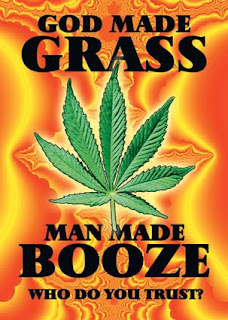 Pic came from here
Posted by The Whited Sepulchre at 7:56 AM

Most of the people that I know that smoke weed drink while they smoke. Not me though. I would never even consider taking a toke. Ah-hem!

CD,
I'm surprised your keyboard didn't explode.
All I can do is repeat your last sentence.
AH-HEM ! !