How To Argue....Please Read The Last Paragraph First

Click on the link above, read the whole thing, and try to get back to me.

My assumption is that no one would read the virtually bulletproof argument presented in the paper if they were to read the controversial conclusion first. It was a disagreeable conclusion. I also assume that the sender didn't genuinely want anyone to evaluate the lengthy argument presented in the academic paper; the goal was to point out the various heresies in the conclusion without reference to the preceding argument.

It made me totally nuts.

Friends of mine who received the same email vigorously defended the author/scholar who wrote the controversial paper. They defended the argument made in the article, and defended it well.

(Awwww....I'm lying....they really didn't defend the piece. They defended the author's right to publish his opinions, and they defended their right to like the author and his books. The points made in that article were too radioactive to be openly and honestly discussed by people with reputations to worry about. So I'll get to it one day....)

But no one that I know pointed out the error of encouraging people to read the conclusion without reading the argument first. Especially when the argument is the point.

What does this have to do with former New York City mayor Ed Koch's piece that asks "Does Al Gore Know What He's Talking About?" Well, for starters, my original intent was to post only the last two paragraphs of Koch's argument on this site. Then I would pat myself and Ed Koch on our backs and compliment both of us for sharing the same opinion on Al Gore, i.e. that he's a doofus.

But that does a disservice to Al Gore by enlisting an "authority" argument from Ed Koch, which would encourage people to read only the conclusion from the "authority".

The Argument From Authority is a weak one, whether the Authority in question is Ed Koch, The Pope, Oprah Winfrey, 9 out of 10 Dentists who chew sugarless gum, or the Old Testament Prophet Habbakuk. What is the evidence that Ed, Pope, Oprah or Habbakuk bring to the argument? That's what matters.

Oprah likes Obama, and she's famous. She's an authority on a lot of things. But can she make an argument that Obama is the best choice for President of The United States? And does that argument hold up well? She's probably tried to make the case for Obama somewhere, but I haven't run across it yet. All I find are statements that Oprah has endorsed Obama.

Posting Ed Koch's closing paragraphs also does a slight disservice to Ed Koch, doesn't it? His intent was to provide us with a math problem, where this fact plus this statistic, subtracted from this statement and multiplied by this piece of history, equals Koch's-opinion-on-whether-Gore-knows-what- he's-talking-about. But many of us in the Blogosphere like to post only the factoids we agree with. Or we grab one disagreeable paragraph, do a thorough Fisking, and move on to the next heresy.

I'm going to try to avoid that from now on. Any fiskings will be complete, rather than selecting the most delicious offerings that the buffet of 2008 offers to me.

And you still haven't read the beautiful hatchet job that Ed Koch did on Al Gore, have you?
Posted by The Whited Sepulchre at 12:52 AM 2 comments:

This Christmas, we're going on a cruise down the west coast of Mexico. I don't know if I'll get a chance to post anything between now and New Year's, so here's my Christmas gift to everybody that's been checking in since I started this thing in September....

Now that Charles Dickens is dead, David Sedaris is probably our greatest living Christmas writer. This is an excerpt from a story called "Dinah, The Christmas Whore" in his Holidays On Ice collection. In this story Lisa Sedaris, David's sister, has decided to bring an older female co-worker from The Picadilly Cafeteria home for Christmas. The Picadilly happens to hire a lot of former convicts to bus tables, mop floors, and help in the kitchen. At this point in the story, the Sedaris family has gotten out of bed in the middle of the night to meet Lisa's new friend.

In addition to being funny, I think it's one of the most beautifully written paragraphs I've ever read:

Every gathering has its moment. As an adult, I distract myself by trying to identify it, dreading the inevitable downsizing that is sure to follow. The guests will repeat themselves one too many times, or you'll run out of dope or liquor and realize that it was all you ever had in common. At the time, though, I still believed that such a warm and heady feeling might last forever and that in embracing it fully, I might approximate the same wistful feeling adults found in their second round of drinks. I had hated Lisa, felt jealous of her secret life, and now, over my clotted mug of hot chocolate, I felt for her a great pride. Up and down our street the houses were decorated with plywood angels and mangers framed in colored bulbs. Over on Coronado, someone had lashed speakers to his trees, broadcasting carols over the candy-cane forest he'd planted beside his driveway. Out neighbors would rise early and visit the malls, snatching up gift-wrapped Dustbusters and the pom-pommed socks we used to protect the heads of golf clubs. Christmas would arrive and we, the people of this country, would gather around identical trees, voicing our pleasure with warm cliches. Turkeys would roast to a hard, shellacked finish. Hams would be crosshatched with x's and glazed with fruit - and it was fine by me. Were I to receive a riding vacuum cleaner or even a wizened proboscis monkey, it wouldn't please me half as much as knowing we were the only family in the neighborhood with a prostitute in our kitchen. From this moment on, the phrase "Ho, ho, ho" would take on a whole different meaning; and I , along with the rest of my family, could appreciate it in our own clannish way.
It suddenly occured to me.
Just like that.

Posted by The Whited Sepulchre at 7:22 PM No comments:

Yesterday, I defended the honor of Jessica Simpson. She hasn't called to thank me.

Various Talk Shows, bloggers, and football fans have accused her of distracting Cowboys quarterback Tony Romo during Sunday's loss to Philadelphia. Their reasoning, as I understand it, goes like this:
1) Jessica Simpson was in one of the Dallas Skyboxes as Romo's guest.
2) TV cameramen filmed Jessica Simpson in the skybox.
3) We could see her. Lotsa times.
4) She distracted fans watching the game on their televisions. (Jessica Simpson could distract the new Pope during his first Easter Mass at St. Peter's.)
5) Tony Romo, by the same logic, could see her too. From 75 yards away. He could pick her out among the 80,000 other people watching the game.
6) Tony Romo didn't play well.
7) He usually plays well.
8) Jessica Simpson must be a distraction.

I went on to say that Romo is a professional, most players have girlfriends or wives in the stands, etc etc etc.... and that the idea that something like that could distract a Pro Quarterback is the dumbest thing I've ever encountered. (I take that back. I forgot about Farm Subsidies, import quotas, Lou Dobbs, the kid who ran a drill press in reverse for two hours, educational monopolies, John Edwards, The Electoral College System, and the man I saw drive a Massey Ferguson tractor into the Sunflower River.)

This is now the dumbest thing I've ever heard: Here's our beloved Wide Receiver, Terrell Owens on the issue:

Cowboys wide receiver Terrell Owens is not too happy with Tony Romo's girlfriend Jessica Simpson, who attended the team's loss against the Philadelphia Eagles on Sunday. T.O. will also have something to say about Jessica once the playoffs arrive. Romo played his worst game of the season.
"She was hot on my list until last week," Owens said. "I've got a message for her when we make the playoffs. Just stay tuned."
Here's more Owens on Jessica Simpson:
"Right now, Jessica Simpson is not a fan favorite in this locker room or in Texas Stadium," Owens said. "With everything that has happened and the way Tony played and the comparison between her and Carrie Underwood, I think a lot of people feel like she has taken his focus away." (from Rick Herrin with the Fort Worth Star-Telegram)

T.O. didn't do diddly squat last Sunday, other than get double-teamed for Jason Witten's benefit. T.O. likes to get his name in the paper, but hasn't been a distraction all year. Then the Cowboys had their first full blown media circus/controversy, and Owens wasn't a part of it.

He couldn't stand it any more.

So the idiot slammed his quarterback's girlfriend.

Cowboys fans, we now have a distraction.
Posted by The Whited Sepulchre at 11:11 PM No comments: 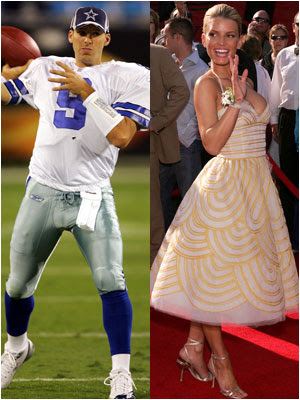 Posted by The Whited Sepulchre at 8:23 PM No comments: