From CNN (although I could have used numerous other sources, all mocking the idea that North Korea actually has an election process):

This Sunday, North Koreans will be required to show their assent for this political system at general elections universally expected to return the current incumbent Kim Jong Un.

While critics say the poll is merely a political show to legitimize the country's rubber stamp parliament -- previous elections in 2009 returned Kim Jong il (Kim Jong Un's predecessor and father) with a 100% mandate on a 99.98% turnout -- observers will be poring over the list of legislators for clues as to how Kim will govern the Communist nation over the next five years.

Kim himself is running for a seat in the Paekusan Constituency No.111; significant because the numbers are regarded as auspicious in Korean culture and because North Korea claims Mount Paektu, located in Paekusan on the border with China, to be the legendary birthplace of his father.

The ruling Democratic Front for the Reunification of the Fatherland holds all 687 seats within the Supreme People's Assembly and voters have only one candidate to vote for in each of the seats.
While the umbrella grouping officially contains four parties -- the Workers' Party of Korea, the Korean Social Democratic Party, the Cheondoist Chongu Party and the General Association of Korean Residents in Japan -- all candidates must be sanctioned by the party including three independents currently sitting as deputies in the assembly.
While it is possible for a voter to cast a ballot against a candidate, they must walk to a special booth to do so. Critics say few are brave enough to cross out the name on the ballot.
From The New York Holy Times (although I could have used numerous other sources, all mocking the idea that the USA actually has an election process):
Two Libertarian candidates were tossed from Ohio’s primary ballot on Friday by Secretary of State Jon Husted in a ruling that sparked immediate plans for a legal challenge. Mr. Husted, a Republican, said he had adopted a hearing officer’s recommendations in disqualifying a candidate for governor, Charlie Earl, and an attorney general candidate, Steven Linnabary.
Their nominating petitions were challenged on two grounds: that signature gatherers failed to comply with Ohio laws requiring them to be either Libertarian or a political independent and another requiring them to disclose their employer.
Mark Brown, a lawyer for the Libertarian Party of Ohio, said it will challenge the decision in federal court. He said the ballot protests were an extension of Republican efforts to keep second third parties off the state’s ballot.
Mr. Earl could draw votes from Gov. John Kasich, a Republican, in his re-election bid this fall.
So.... We Libertarian Party folks are accustomed to skullduggery from the Beltway Party, trying to keep us off the ballot.  (I won't deny that we sometimes stumble when trying to get over the hurdles they place before us.)
But it does appear that North Korea does offer an easier process for other parties to be represented.
Just go to the alternative booth to vote for someone other than those in power.
I've often said that it's easier for a Southern Baptist to get on the ballot in Saudi Arabia than it is for a Libertarian to get on the ballot in Oklahoma.  Or Ohio.
And we are the country that sends its army and navy all over the world to guarantee free and fair elections. 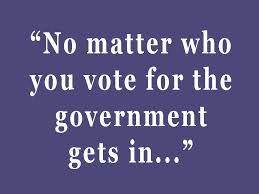 Posted by The Whited Sepulchre at 6:46 PM No comments: