We're going to continue shaping ourselves into some kinda shape and go someplace different and maybe figure out whose ass to kick. Or something like that.

Someone programmed the teleprompter of The President Of The United States with the following statement, intending for it to be read with great sincerity during a live broadcast about the oil spill:

Instead, what has defined us as a nation since our founding is the capacity to shape our destiny -– our determination to fight for the America we want for our children. Even if we're unsure exactly what that looks like. Even if we don't yet know precisely how we're going to get there. We know we'll get there. 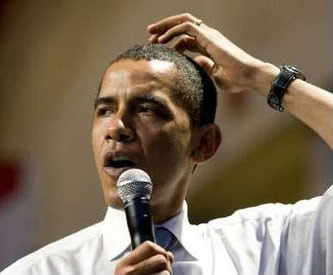 Speak for yourself, Barry.  No wonder you don't know whose ass to kick.

Pic came from here.  Vapidity of the quote was pointed out by Marc Thiessen, among many others.
Posted by The Whited Sepulchre at 2:05 PM 2 comments:

Obama has played a lot of golf since the oil spill. As if that's a bad thing.

Posted by The Whited Sepulchre at 11:56 AM No comments:

Email ThisBlogThis!Share to TwitterShare to FacebookShare to Pinterest
Labels: barack obama, distractions, golf, The Government In A Cavalry Uniform, vacations


You remember how Statists used to run around claiming that such-and-such strategy or policy was "right out of Karl Rove's playbook"?

Well, here's the Statist playbook on getting Cap And Trade passed ASAP, courtesy of links provided by Ann Althouse.
Page 12, which describes how to frame the opposition, is so Saul Alinsky that it makes my head hurt.

Why is it so important for them to get something passed immediately?  Here's Ms. Althouse:

You see why this is absolutely necessary, don't you? What if nothing is done and global warming... doesn't happen? What a disaster! But if disastrously extreme measures are taken and then global warming doesn't happen? What a great relief! It will be impossible to tell whether the solution worked or whether global warming just wasn't going to happen anyway. Win-win!
These guys want to control industry, transportation, and most of all, they want to control you.  I've never understood that mindset, but I admit that there's lots of money in it.
But the climate is not cooperating with the computer models.  The temps have been flat for a while, if not showing a cooling trend in North America.  As best I can tell, it all depends on who is reading the thermometers, massaging the data, and then claiming that the dog ate their homework.

Even worse, is there anything that would be accepted as proof that Global Warming isn't happening?

Here's my current favorite debating point when discussing this with alarmists:

I don't believe that God intervenes in what's happening on this planet.  Or anywhere else.  But hey, I'm open to discussion.  You can change my mind.  If you tell me God has revealed to you that on July 13th of 2021, a baby will be born with two heads, and by the age of two, one head will start speaking Aramaic and the other will speak Choctaw, I'm going to have to re-evaluate my theology if that unlikely event comes to pass.

If God were to suddenly interfere with our TV and radio signals for a year and beam in programming from heaven that explains the Book Of Revelation, I would affirm that I've been wrong.

For the debate on this issue to matter one way or the other, there has to be a possibility of proving one side or the other as false.  But there are millions of good people out there who will always believe that God intervenes.  They can't come up with a scenario that would disprove their opinion that God intervenes in their lives all day every day.

So.....has the Alarmist side of the Global Warming debate ever admitted that there could be climate trends that would disprove their belief in man-made Global Warming?  I haven't found it yet.  Ice, snow, cold, and hot are all proof that we're warming the planet.  (Plus, do you remember about three years ago, when it became politically incorrect to say "Global Warming" instead of the preferable "Climate Change"?  Ever wonder what that was about?)

The rest of us see the proof every day, and the more snowstorms we see, the more important it is for Obama/Pelosi/Reid to strike while the iron....unh....isn't hot. 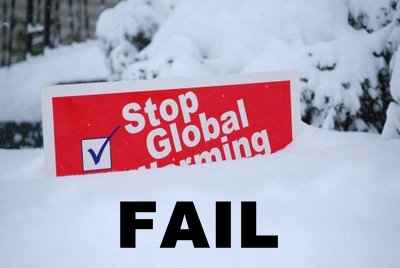 Posted by The Whited Sepulchre at 8:37 AM 39 comments:

Whose Ass To Kick - Demotivational Poster Posted by The Whited Sepulchre at 4:39 PM No comments:

I'm about 1/4 of the way into a Tivo of John Stossel's recent program on Milton Friedman's classic Free To Choose book and documentary.
Friedman's analysis of why some places thrive while others languish has always made perfect sense to me.
I don't understand how anyone can read the book and disagree.
People generally flock to the places where they have more Freedom To Choose.
They tend to avoid the others.

Most of my friends react negatively when someone at their workplace limits their freedom.
This increases exponentially when the limitations impact home or family.

So why do relatively sane people go into voting booths and vote for those who have vowed to curtail freedom?  I went to sleep last night intending to ask the question this morning.

I didn't know I would find the answer waiting on me here via here.

An old Russian joke tells the story of a peasant with one cow who hates his neighbor because he has two. A sorcerer offers to grant the envious farmer a single wish. "Kill one of my neighbor's cows!" he demands.


And then, commenting on some academic research and experiments.....

Why would people pay to hurt others without any benefit to themselves? Is it not the height of irrationality for a person to harm himself just so he can harm another more? Zizzo and Oswald believe the desire to burn other people's cash "appears to be strong evidence for the existence of some kind of envy or concern for fairness."

The poorest players chose to burn more of the winnings of the wealthiest, but big winners also burned other players, in their case indiscriminately. The researchers speculate that winners may have chosen to burn others as a way of maintaining their rank: They wanted to be first more than they wanted to maximize their cash holdings.

Socialists often claim that capitalism is based on humanity's worst impulses, greed and selfishness, despite the fact that people who live in societies that participate in markets tend to be more generous and cooperative than those who don't. Oswald and Zizzo's research suggests that socialists who believe that their ideology appeals to humanity's better instincts have it backwards. Envy is behind the leveling spirit of socialism. A truly generous and rational soul would wish others well, especially if they have done no one any harm.

Only an open society in which people clearly see that they have an opportunity to rise seems capable of containing and channeling humanity's envy instinct. The task for champions of freedom is to encourage people to want more cows for everybody.

Not a perfect answer, but it should work nicely until the real thing comes along.
Posted by The Whited Sepulchre at 8:02 AM 4 comments: