From one of our colonies: A human rights update


Kabul (CNN) -- Afghan President Hamid Karzai has said that a rape victim freed from prison after he intervened on her behalf has the right to make her own choice about whether to marry her attacker.
In an exclusive interview from Kabul, Karzai told CNN's Fareed Zakaria that the woman's case appeared to be a "misjudgment" that had to be resolved.
The woman, identified only as Gulnaz for her own protection, was sentenced to 12 years in prison after she reported that her cousin's husband had raped her.
But the 21-year-old was freed this week following the president's intervention, and is now staying at a women's shelter in Kabul, with the daughter she conceived in the attack and gave birth to in prison.
Her plight attracted international attention when it came out that she had agreed to marry her attacker to gain her freedom and legitimize her daughter.

Perhaps this legal concept will catch on in our other colonies like Korea and Germany, and then spread to the U.S.  If a woman turns down a guy's marriage proposal, he can walk away rejected, or....he can rape her.

"Hey, how did you two meet?"
"You didn't read about it?  He raped me, and we've been together since, for the sake of the children.  It turns out we like a lot of the same TV shows and movies !"

All you need to know about the Republican establishment 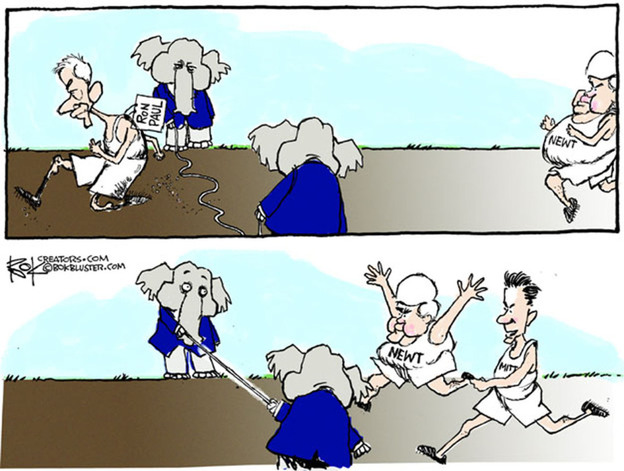 Posted by The Whited Sepulchre at 1:50 PM No comments:

A Hypothetical Question About The Nobel Peace Prize

Carter/Mondale - Carter won it, and then went off into full-time Foreign Policy interference.

Clinton/Gore - Gore won it, and then went off to be a Green Scam Billionaire.

Obama/Biden - Obama won the Peace Prize, and then went off to bomb the crap out of Libya, get involved in Pakistan, and then carefully maintain the other wars that we had on our plate.

If this happens, and the new Democrate Duo happens to win, is the Nobel automatically awarded to one of the new Statists?  Should it be, just to save time?

Just wondering.
Posted by The Whited Sepulchre at 9:15 AM 4 comments:

Don Surber, whose writing I ordinarily enjoy, has been pushed over the edge.  It seems that Ron Paul's opposition to Hillary Clinton's and Dick Cheney's and Condi Rice's and George Schultz's and Henry Kissinger's foreign policy screw-ups have driven him over the edge.
He's got a piece on his site entitled "Ron Paul Is Despicable".  Here's Mr. Surber:
His (Ron Paul's) weird take on the Constitution is Jacksonian and I do not mean that in a complimentary manner. Republican Congressman Ron Paul envisions a world in which the USA is neutered as she was in the 1990s. He talks as if the last 65 years without a major European war are not worth the sacrifices our nation has made over the years in standing up to communism and in standing up for democracy in Europe and elsewhere.
Ok, lets look at the easy stuff first.  There hasn't been a major European war, only a minor one in Yugoslavia/Bosnia/Serbia.   But let's broaden our horizon to include continents that don't include so many white folks.  What about Korea, Viet Nam, Cambodia, Laos, Libya, Pakistan, Iraq, Afghanistan, El Salvador, and the financial aid and training we've given to dozens of dictators?
Never mind.  Those folks ain't white, and they talk funny.
There are places in the world where nothing is more terrifying than the U.S. coming over to "stand up for democracy". 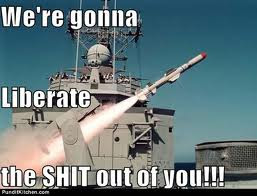 Back to Mr. Surber:

But even if I agreed with him, I would think of Ron Paul as a despicable human being because of this, which he said to supporters, according to CBS: “Just think of what happened after 9/11. Immediately before there was any assessment there was glee in the administration because now we can invade Iraq.”
Well, if memory serves, we went into Iraq claiming that they had WEAPONS OF MASS DESTRUCTION.  We never found any.  The flimsy evidence upon which we based our invasion was weak and flawed.  I repeat....WMD's were the only reason we had to invade Iraq at the time.  We went in.  We found nothing.  We were looking for anything, any excuse whatsoever, to go invade the place.  We were "gleeful" to have that excuse, as no others had presented themselves.  We're still there.  We now have the largest fort in the world over there, and it is disguised as an embassy.  We'll be there forever.  Mission accomplished.
And there was very little Al-Qaeda presence there until we showed up and started kicking over anthills.

He is lucky we outlawed dueling, because I am pretty sure that given the opportunity, Dick Cheney would indeed issue such a challenge.

And if Dick Cheney's dueling skills are anything like his dove hunting skills, Ron Paul has nothing to fear.  Cheney's no better at hitting targets than he was at finding WMD's.

UPDATE: Ron Paul need not worry about repercussions. No one in the Bush administration takes him serious. The London Daily Mail reported that Ari Fleisher, Bush’s spokesman during 9/11, tweeted, “The man is nuts.”

Ron Paul has peddled this bullcrap for years. Recall this exchange during the 2008 presidential debate season:

Ron Paul: “They attack us because we’ve been over there, we’ve been bombing Iraq for 10 years. We’ve been in the Middle East. I think Reagan was right. We don’t understand the irrationality of Middle Eastern politics.”
Rudy Giuliani: “That’s an extraordinary statement of someone who lived through the attack of Sept. 11, that we invited the attack because we were attacking Iraq. I don’t think I’ve ever heard that before and I’ve heard some pretty absurd explanations for Sept. 11.”
Ron Paul is a perennial presidential candidate whose first bid was in 1988. He has figured out how to make a buck or two off paranoid rubes who buy this swill. It is a cottage industry that others such as Lyndon LaRouche work quite well.
I defend his right to lie about honorable men because I trust that most people have the wisdom to understand how ignorant he is.

The day after this debate, Ron Paul's campaign took in one million dollars.
Until Ron Paul dropped out of the race, he had the honor of receiving the most contributions from active military personnel.
Here's something from the comments beneath Surber's article:


I wish Ron Paul was crazy. I wish Iraq really did have WMD’s. I wish the Federal Reserve really did have the knowledge and ability to maintain stable prices and full employment. I wish that our welfare programs were solvent and sustainable. I wish the sacrifices made by our troops were really necessary. I wish the Patriot Act was patriotic. I wish we didn’t have inflation and unemployment was only at 9%. I wish we could win the war on drugs. I wish the terrorists really did hate us for our freedom. I wish we were defending our national interests in Afghanistan. I wish our big banks really were too big to fail.

But I can’t believe these lies anymore, and Ron Paul is the only candidate who is brave enough to tell the truth. Open your eyes.