The most depressing thing I've ever read.

This just might be the most depressing thing I've ever read.
Seriously.

The experiment was prompted by Obama's recent comments that things like ATM's, airport check-in ticket scanners, and other technologies have killed a lot of jobs.

Please pray for our nation.
Posted by The Whited Sepulchre at 7:00 AM 4 comments:

We are supposed to be a nation of laws.

One of those laws states that Congress alone has the power to declare war.  If there's an emergency, the President can use the troops and planes and boats and bombs and nukes all he wants, but he has to get Congressional approval for anything lasting longer than 60 days.

We've been bombing the crap out of Libya for longer than 60 days.  If this had been done by anyone but a Nobel Peace Prize-winning, warm and fuzzy, anti-militaristic Democrat, the calls for impeachment would be on the front page of every newspaper.

John Boehner, under some pressure from people who wonder why we're getting involved in war number 4 or 5, depending on how you count, finally sent The Teleprompter Jesus a letter demanding to know why we were still involved without Congressional approval.  Here's what he got back:

The initial phase of U.S. military involvement in Libya was conducted under the command of the U.S. Africa Command. By April 4, however, the United States had transferred responsibility for the military operations in Libya to NATO and the U.S. involvement has assumed a supporting role in the coalition's efforts. Since April 4, U.S. participation has consisted of: (1) non-kinetic support to the NATO-led operation, including intelligence, logistical support, and search and rescue assistance; (2) aircraft that have assisted in the suppression and destruction of air defenses in support of the no-fly zone; and (3) since April 23, precision strikes by unmanned aerial vehicles against a limited set of clearly defined targets in support of the NATO-led coalition's efforts.

Whenever Allen Patterson pounds something really stupid into the internet, he can't blame it on The Whited Sepulchre when he sobers up.  In the words of the Beatles....

The United States is 75% of NATO.  It wouldn't exist without us.

If we shot down a Mexican Air Force plane over San Antonio, and Cubans were aiding the Mexicans in search and rescue, we would try to stop the Cubans.  We would consider them as hostile combatants.

Okay, about that "no-fly zone"....  If Mexico declared Texas to be a "no-fly zone", and Cuba helped "suppress and destroy" our air defenses, we would see it as an act of war on the part of Cuba, not the incident result of a non-kinetic military action.

Regarding Obama's last point about "unmanned aerial vehicles"....  If you're getting bombs dropped on your head, I don't think you care if it's being done by the pilot in the plane, or an Air Force kid with a joystick at a base somewhere in Wisconsin.  The result is the same.  We're dropping bombs on Libya.

Barack Obama needs to ask Congress for a declaration of war against Libya, because we're at war with Libya.

Congress needs to man up and demand it.  Then vote it up or down.  That's how it is supposed to work.


Posted by The Whited Sepulchre at 6:43 AM 4 comments:

Ron Paul vs Anthony Weiner on the Drug War

Go here to see the text. 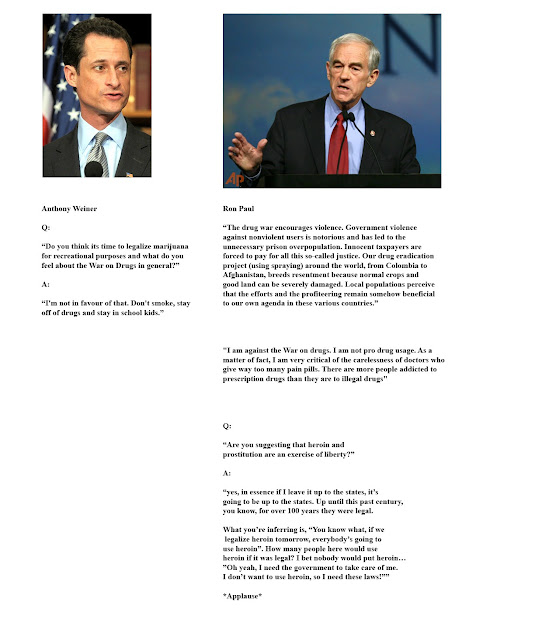 Posted by The Whited Sepulchre at 6:42 AM 3 comments:

This guy is accepting nominations for the Top 100 Cliches in the English language.
I'll post my nominations later, mostly from the sports world, but he's off to a great start with no help from me.
(By the way, did you folks know that I'm employed by the world's leading value-added, vertically integrated, synergized supplier of Produce Elevation Solutions?  Yep.  That means we build all of the components of some really good fruitstands.)

Posted by The Whited Sepulchre at 6:58 AM 3 comments:

I decided to Tivo last night's Republican debate, choosing to go drink coffee with The Aggie instead of liveblogging it.  Heck, they invited Donald Trump to participate, but didn't invite the only semi-Libertarian with executive-level experience (Gary Johnson).

Spending time on something else last night was a good call.  Lord have mercy, what a horrible format.  Let's have the moderator ask a question of just a few candidates, then cut to someone in the audience who wants to spend a few minutes asking a question, giving two candidates 8 seconds to answer, let's bracket the commercials with cutesy "either/or" "Letterman/Leno" "sadism/masochism" questions, and then cut to another CNN personality who introduces someone in Gobbler's Notch, New Hampshire, who says something like this:

"Hello, my name is Whited, and I have a Libertarian blog at www.thewhitedsepulchre.blogspot.com, and while I have no children serving in the military, but I support our troops, and have written extensively on the subject for mulitple periodicals, and have dozens of dozens of Twitter followers, I'd like to ask the candidates a question that I believe goes to the heart of our predicament as taxpayers and voters.  As a blogger and a shipping manager (and a libertarian activist), I depend on a stable fuel supply to run my business.  While this does not have a direct correlation with ObamaCare, what would you do, as President, to defend marriage?"

I've noticed this for years at literary and political events.  If you're lucky enough to ask, say, Stephen King or Ron Paul a question, get to the point.  The rest of the audience doesn't care about what books your currently reading, your job, or your motivation for asking the question.

A couple of other things.... When Newt started bragging that he wrote the Defense Of Marriage Act, I almost spewed my breakfast across the den.  I don't care who you are, that's funny.

Last, with ALL Republicans at this event brandishing their small government credentials for an hour and a half last night, how is it that we're 14 trillion in debt ?
Posted by The Whited Sepulchre at 6:32 AM 3 comments: 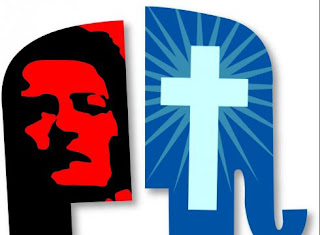 Posted by The Whited Sepulchre at 6:42 AM 2 comments: